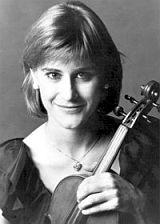 David Bratman on March 30, 2009
Music from Eastern Europe, especially if it’s also from the earlier part of the 20th century, has a reputation for being rugged and rough-hewn, full of exotic sounds and hypnotic motifs over catchy rhythms. Sometimes that reputation is deserved. The Redwood Symphony, a Peninsula community orchestra that doesn’t shy away from the unusual or the challenging, will be playing three such works at its concert on April 4 in Redwood City, with Music Director Eric Kujawsky conducting.

Many people from that part of the world are Slavic, but there are many others as well. The three composers on this concert are each of a different nationality, and only one of them is Slavic.

Béla Bartók, Hungarian, the Magyar people from the Danube plain. His Dance Suite of 1923 is the roughest, most brutal, and least tunefully catchy of the pieces on offer, but it’s also the most good humored and generally fun-loving. If you know his Miraculous Mandarin, think of that work plus a sense of humor. The six short movements of this suite almost run together. A variety of insanely fast and complex sections alternate with a gentler repeating tune. Then Bartók throws all the previous material together in a potpourri of a finale.

Aram Khatchaturian, Armenian, an ancient people from up in the Caucasus on the borders with Iran and Kurdistan. Khatchaturian’s style of pulsating motifs and gorgeous tunes over fast, dancing rhythms has become so taken for granted that the composer himself has been neglected. His once-popular Violin Concerto of 1940 has spent most of its time in a bottom drawer with the old linen since David Oistrakh, its dedicatee and great champion, died 35 years ago. Now younger violinists are rediscovering it. Claudia Bloom of the Opera San José orchestra will be the soloist at this concert. The slow middle movement is the most sublime Khatchaturian moment, but the lively outer movements have great dazzle.

Leoš Janáček, Moravian, the lesser-known Czech people, from the hills east of Dvořák’s Bohemians, and the Slavic representative at this concert. The opening fanfare of Janáček’s Sinfonietta of 1926 will grab you quickly. Brass and timpani, nothing else. First, supporting harmonies in stark open fifths, then a battery of trumpets declaiming a motif that expands as it repeats. After that, the rest of the orchestra comes in. Listen for the first themes of the second and fourth movements, so similar to each other and so reminiscent of Orff’s Carmina Burana. And wait for the end of the fifth and last movement, when the fanfare returns, verbatim, over towering trills from the rest of the orchestra.