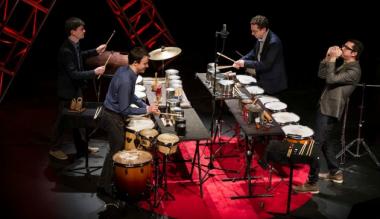 Exploring a Wilderness of Sound with Third Coast Percussion

“Any object in the world can be a percussion instrument,” Third Coast Percussion ensemble member David Skidmore explains. “Most people do not pay attention to all the amazing sounds that are happening around them because they’re not present for them in the moment.”

Thus Skidmore begins to describe “Wild Sound,” a somewhat indescribable 45-minute opus. It is the title piece of the program that Third Coast Percussion will perform at SFJAZZ on March 28, 8:00 pm, as part of San Francisco Performances’ new PIVOT series. Composed for the Chicago-based percussion ensemble by the very au courant composer and Wilco percussionist Glenn Kotche, the “crazy, giant, multi-media performance piece” sees the four members of Third Coast playing original instruments while building others.

The percussionists do not go about their construction in the safe remove of the stage. Not only do they build instruments to the accompaniment of video art, live video, and field recordings, they also include audience participation. What results may be as unpredictable as the chance composition techniques pioneered by the great John Cage, whose works for percussion were central to the development of Third Coast Percussion.

That is certainly the impact that Music for Pieces of Wood, the other work on the program, has had on audiences for decades. A seminal piece by minimalist master Steve Reich, it is one of the compositions recently recorded and issued on Third Coast Percussion’s all-Reich 80th birthday tribute album, the rather literally titled Third Coast Percussion / Steve Reich.

One of Reich’s classic, process-driven works from the 1970s, Music for Pieces of Wood calls for the members of the ensemble to enter one at a time, building up patterns with rhythms set off from each other in canons created in what Skidmore calls a “very iconic Steve Reich way.”

“You’ll encounter cornerstone Reich techniques in their rawest form,” he says of the composition, which calls for the ensemble members to play pieces of wood tuned to a whole tone scale. “It borrows a lot from the Ewe West African drumming style that Steve studied early on.”

In another distinctive choice for Third Coast’s performance of Music for Pieces of Wood, the four percussionists will play a piece originally intended for five players. “The player who begins the piece by playing the pulse plays the same pitch as a player who enters later on,” Skidmore explains. “It’s actually my part. I start by playing the pulse. But once everyone else is added in, the pulse fades out, and I can begin the rhythm that the fifth player would have performed. Then, when we snap into unison, the pulse returns. We love this piece, and Steve is really fine with us performing it the way we do.”

Having heard Third Coast Percussion’s recording of the intentionally amplified work, I can attest that it is truly engaging. The evening has all the markings of an ear opening, mind-bending adventure.