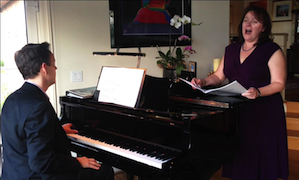 Festival Opera may be cash-strapped these days, but it’s hardly wanting for creative drive and acumen. Rather than proceeding passively to its grave, the 23-year-old company, like many Jews, Gypsies, and gays facing extermination under the dictatorship of the Third Reich, has grown stronger in its will to survive by means of vital programming that, in the case of this month’s major offering, addresses the twin themes of survival and justice.

On April 26–28, Festival Opera presents two rarely performed chamber operas: Victor Ullmann and Peter Kien’s The Emperor of Atlantis and Jake Heggie and Gene Scheer’s Another Sunrise. Both address issues of the Nazi Holocaust, and will be performed in English.

Ullmann and Kien’s one-act opera, whose full name in German and English is Der Kaiser von Atlantis oder Die Tod-Verweigerung (The Emperor of Atlantis, or The Disobedience of Death), is perhaps an hour long, and includes elements of parody and satire. It was written in about 1943 during its creators’ internment in the “model” concentration camp Theresienstadt. Although The Emperor of Atlantis managed to make it to the rehearsal stage, the Nazis never permitted the opera to be performed. Sensing that the Emperor was a stand-in for Adolf Hitler, they instead sent its composer and librettist to the ovens.

Miraculously, a working version of the manuscript, though not in final form, was entrusted to the camp’s librarian, fellow prisoner Dr. Emil Utitz, who survived the war. You can read a bit of the tale, including hints of the fascinating metaphysical elements, on Wikipedia.

The far more recently composed Another Sunrise, by contrast, was written for and premiered by Music of Remembrance in Seattle in 2012. Despite the major status of its creators, it is only receiving its second production with these performances. Both productions are sponsored in part by the Jewish Federation of the East Bay, which is also presenting excerpts from Another Sunrise at the East Bay Regional Commemoration of the Holocaust, Yom HaShoah, on Sunday, April 27, at Temple Isaiah in Lafayette. (The international Yom HaShoah commemoration is April 28.)

Heggie and Scheer’s opera was their second commission for Music of Remembrance. The first, For a Look and a Touch (recorded by Naxos, and set to be reissued in May in a recording that includes all three pieces that the team has written for that organization), addresses the persecution of gays during the Holocaust. The team composed it for baritone Morgan Smith, who played Starbuck in the premiere of their marvelous opera Moby Dick.

“Another Sunrise is about the nature of survival,” Heggie explains. “Historically, we’ve seen survivors very often categorized as heroic people. But very often, to survive, you don’t wind up doing very heroic things. You just survive. We wanted to tell that part of the Holocaust, as well.”

The opera focuses on the story of Krystyna Zywulska. Born Sonia Landau in 1914, she was studying law at Warsaw University when the war began. After being relocated with her family to the Warsaw ghetto, Sonia and her mother walked out of the ghetto in broad daylight.

At first, Sonia adopted the name Sophia Wisniewska. While working for the underground resistance, she was arrested by the Gestapo in 1943. Refusing to divulge secrets, and hiding her Jewish identity, she changed her name to Krystyna Zywulska, and her birth year to 1918. Sent to the infernal prison camp/death chamber of Auschwitz as a political prisoner, she used her talent for writing lyrics of protest and survival to then-present-day and even older tunes to give people hope and help them get along.

One fellow inmate in a position of authority who wanted “camp poet” Zywulska to survive became instrumental in securing her eventual job in the Chamber of Personal Effects. There, she and some 50 other women inventoried the possessions of people who arrived at the camp on prisoner transports. Often, Zywulska had no choice but to watch the prisoners immediately sent to the building next door, where they were killed in the gas chambers. Through all the horror, and well beyond the war’s end and the publication of her memoir, I Came Back (also known as I Survived Auschwitz), she continued writing lyrics to pop songs. It took until the 1960s for her to reclaim her Jewish identity. Although she is no longer alive, her son attended the premiere of Another Sunrise in Seattle.

“Krystyna Zywulska’s way of survival wasn’t heroic, yet she was declared a heroic survivor of the Holocaust,” says Heggie. “Her will to survive trumped her conscience, and it haunted her for the rest of her life. Her goal was to see another day, but she was haunted by the question, ‘Was it worth it to see another sunrise?’”

“Marie Plette is very authentic. The entire room was shattered, because she’s so raw and real, and the voice is so beautiful. She takes us to the point where we can fall apart and she doesn’t.” – Composer Jake Heggie

Singing Zywulska in the 30-minute, one-woman opera, which Heggie describes as addressing “the very human story of trying to find words to describe a situation that was indescribable,” is soprano Marie Plette.

“Plette is probably, in my mind, the most underrated local artist, in terms of national recognition,” says Festival Opera Executive Director Sara Nealy. “She’s incredibly powerful as a singer and actress.”

Heggie, who worked with Plette for the first time when she sang two excerpts from the opera at a fund-raising event at the beginning of March, seconds Nealy’s sentiments. “Marie is very authentic,” he says. “The entire room was shattered, because she’s so raw and real, and the voice is so beautiful. She takes us to the point where we can fall apart and she doesn’t. As vulnerable as Krystyna was, she was also incredibly strong. Marie found that strength amidst vulnerability and identified with it immediately. I was very moved by her performance.”

The double bill’s star power does not stop with Plette. In The Emperor of Atlantis, renowned baritone Eugene Brancoveanu sings the role of Emperor Overall, while another San Francisco Opera veteran, bass-baritone Philip Skinner, plays Death. Hardly in second place come baritone Roberto Perlas Gomez (The Loudspeaker), soprano Rebecca Garcia (The Maiden), tenor Christopher Bengochea (The Soldier, and Harlekin), and mezzo-soprano Valentina Osinski (The Drummer Girl). Both operas will be sung in English.

With longtime Musical Director Michael Morgan now working with Festival Opera in an advisory capacity, Matilda Hofman steps up to conduct both the singers and the Festival Opera Chamber Orchestra. No stranger to the Bay Area, Hofman is music director of the Diablo Symphony Orchestra, a regular guest conductor with Empyrean Ensemble and the Left Coast Chamber Ensemble, and assistant conductor at one of Morgan’s major beats, the Sacramento Opera. Beth Greenberg, who directed Festival Opera’s West Coast premiere of Ned Rorem’s Our Town in 2007, returns to direct both chamber operas.

Nealy supplies some of the backstory for the pairing. “We had decided to program Emperor years ago, and were looking for something to go with it. Then I met Gene Scheer last year at the annual Opera America convention, just as I met Jake there the year before. Gene was talking about new works that connected culturally with people in the communities they were in. We had already decided that we wanted to do that in Festival Opera. When I went up to Gene and told him what we were doing, he said he had the perfect piece to go with Emperor.

“I was in tears when I first heard the character of Krystyna sing, in excerpts from Another Sunrise, ‘There are no words.’ It almost has the quality of a haiku, in that what is not said hangs in the notes between the words, and just as powerfully as what she’s singing. In the visual world, you’d say it hangs ‘in the white space.’”

To Nealy’s way of thinking, the program is about far more than the Holocaust per se. Rather, it uses that traumatic event as a lens through which to explore universal values and issues that affect everyone.

“Festival Opera is trying to find the right balance. We must explore the creation and production of new work as part of keeping the art form alive.” – Executive Director Sara Nealy

“Festival Opera is trying to find the right balance,” she remarks. “We’ve concluded that we must explore the creation and production of new work as part of keeping the art form alive. We did this first with the premiere of Rorem’s Our Town, but we haven’t been doing enough of that. We also want to do smaller-scale works. Personally, I feel strongly about producing exceptional works that have already premiered, but haven’t yet received enough recognition to garner a second presentation.

“We are trying to find our audience, but some of it has ‘aged out,’ as people say. So we hope that doing new works that are relevant will connect with people and produce new audiences.”

One indication that Festival Opera is moving in the right direction comes in the form of an announcement from Opera America. In June, Festival Opera will be just one of six companies chosen to present at the “New Works Sampler” at the organization’s annual conference in San Francisco. The work, of course, will be Another Sunrise, which is slated to take its rightful place in Heggie and Scheer’s newly created opera, Out of Darkness: A Triptych of Holocaust Stories.

From potential-has-been, Festival Opera is poised to emerge as a company on the cutting edge. You can help it achieve success by heading to its website where you can learn more about the organization, and even to bid on a framed page from Jake Heggie’s original score to Another Sunrise, signed by him.