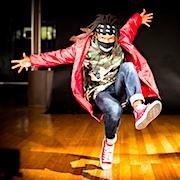 Every year since 1999, San Francisco International Hip-Hop DanceFest founder Micaya goes on an around-the-world journey. “After an international call for applications, I sit my butt down, watch everything, and look to find two diverse programs,” she says in a phone interview.

Selecting from approximately 100 videos received prior to the upcoming 21st-annual festival Nov. 22–24 at the Palace of Fine Arts, Micaya, a respected dancer, choreographer, teacher, and producer of hip-hop dance since 1993, sought contemporary themes, poignant or pivotal stories, superior dance skill, a mix of male, female, and nonbinary choreographers, and provocative, charismatic works “with a different vibe.”

Expressed through b-boying, breaking, popping, freestyle, locking, clubbing, housing, voguing, and other urban choreography, hip-hop’s fusion of styles constantly shape-shifts. This year, bone-breaking, in which dancers look like they’re disjointing themselves, and ever-more-daring turfing that channels classical ballet by dancing on tennis- and street-shoed toes, continue the genre’s evolution. Micaya says dancers “killing it on BART” and drawing upon styles started on street corners on America’s East and West Coasts consistently practice and refine the art form. A highlight of the festival arrives when street styles are brought to the proscenium stage and the staid formality of a theater dissolves to broadcast universal, inclusive messages.

“I’m constantly seeing how an artist can take power or how they can simply move — and change the way we think,” Micaya says.

Audiences at this year’s festival will note themes such as technology, politics, gender identity, the significance of “home.” Micaya says, “Technology right now is huge. At least four applications had dancers wearing gas masks. These were from different parts of the world so there’s a collective consciousness. In politics, art and dance started with Black Lives Matter, with people wanting to speak their voice. We’ve had pieces about human slavery ... there’s always been something about politics.”

Micaya directs and choreographs for the SoulForce Dance Company and says her Arrest the President was sparked by a feeling of hopelessness. “Three years ago, I woke up crying. Absolutely feeling hopeless. In the theater, it was the first day of technical rehearsal for the festival and I was so sad because Trump had just been elected. The artists who came in completely shifted the weekend for me and everyone else. But then, I had to go back into the world and I began to feel more and more heavy. I was cursing. Then this year, I heard IceCube’s, Arrest the President. I started with that and developed a piece getting into what my dancers want to say, how we feel.”

Gradually, what was disgust and rage became an investigation. A dancer embodying Donald Trump is visited by a muse. The dance becomes an expedition, an exploratory protest statement and “not just a dance spewing vileness for eight minutes,” she says. “It ends with the dancers still hypnotized (by dystopia) and the muse reappearing to snap them out of it.”

Asked about hip-hop coming this year from outside of the United States, Micaya says work from Norway, France, Canada, and Austria is more actualized. “Honestly, in a lot of countries, artists are more encouraged, supported, and allowed to be artists and go into the depths of what they want to express. Sometimes hip-hop companies here in the U.S. aim to be number one in a competition. They throw together three-minute pieces. And then I see these 20-minute pieces with beginning, middle, and end; transformational pieces that come from other parts of the planet.”

Two such works this year arrive from Austria-based Hungry Sharks. The sky above, the mud below features a female soloist in an excerpt from the work. The woman travels a journey through religion and her connections to womanhood. Hungry Shark’s full company appears in Program B’s #fomo. “It’s about how we feel we’re not worthy enough when we’re looking at someone online who seems more interesting than we are,” says Micaya. Light and shadow are essential to the dance, with production elements along with movement establishing social media’s edgy, psychological impact.

Even within a theme — say, feminism — there is nuance. “Last year we had Paradox Sal and because they were just the physically strongest women people had ever seen onstage, they made a feminist statement.” This year, feminism runs like an undercurrent in The Mosaic, a female trio from New York. “They have a mixture of vulnerability and power that’s touching,” she says.

While the festivals always include heavy-hitting pieces, crucial programmatic balance is achieved with an equal number of celebratory, energetic works. Micaya says those uplifting dances leave audiences energized and kids — and more than a few bold adults — inspired to show their best moves in the Palace of Fine Arts’ aisles.

Look for dance without limits when AXIS takes the stage during National Dance Week.