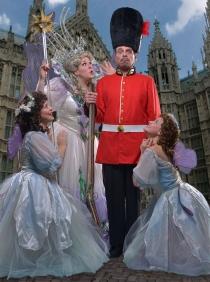 Iolanthe, or the Peer and the Peri may not be the most famous or most remembered show by Gilbert and Sullivan, but it is one of their best. Sullivan’s music is enchanting and at its most flexible (check out the rhythmic variety in the Act 1 finale, for example). Gilbert’s libretto is his usual mashup of gleeful nonsense and good-natured barbs. You sometimes wish the show had a little more sting, instead of feeling like the White House Correspondents’ Dinner, but the satire of upper class privilege is there, if you really want it, especially in the confrontation between the fairies and the peers, which leads to exchanges like this one:

LORD MOUNTARARAT: I don’t want to say a word against brains; I’ve a great respect for brains. I often wish I had some myself, but with a House of Peers composed exclusively of people of intellect, what’s to become of the House of Commons?

LEILA: I never thought of that!

LORD MOUNT: This comes of women interfering in politics.

Lamplighters Music Theatre is, of course, the local specialist in this repertoire. In addition to the experienced crew of Savoyards, Lamplighters is constantly pulling in young singers and actors from the S.F. Conservatory and elsewhere, so that the company is renewed. Iolanthe promises to be a bit of smiling, summer fun that won’t remind you of actual politics.