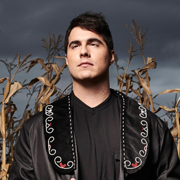 Interviews with Jeremy Dutcher figure among the new demands on a Canadian First Nations (indigenous) singer-pianist who’s risen rapidly to international attention. The 28-year-old Toronto resident needs now and then to take a break from the clamor, to return to something like the pastoral pace of his raising in the Maritime province of New Brunswick, as a member of the Wolastoqiyik [pronounced Wuh-last-o-key-yik] tribe.

I first witnessed Dutcher a year ago, at the Festival International de Jazz de Montréal, performing on piano and singing in his tribe’s native Wolastoq language (the word denotes ‘the beautiful river’; renamed by the colonizers of New Brunswick as the St. John), in the basement of a church, a beautiful historical landmark. He hadn’t yet won Canada’s prestigious Polaris Prize, nor its Grammy-equivalent Juno Awards. Both of these wins would recognize his debut self-produced album, Wolastoqiyik Lintuwakonawa, translated as Songs of the People of the Beautiful River, tracks from which were presented in Montreal and will be heard here this Saturday when Dutcher appears at 1 p.m. at the Yerba Buena Gardens Festival.

Dutcher incorporates in his live and recorded music an unusual and affecting act of legacy, playing transcribed wax recordings from 1911 by an early anthropologist of a tribal elder singing and speaking, and following the melodies with his own heldentenor voice and mellifluous keyboard compositions. The method and quality of his approach derive from his training, including classical voice with Marcia Swanston at Dalhousie University in Halifax, Nova Scotia.

Two semesters before completing his music degree, Dutcher enrolled in a class in Social Anthropology, and decided to stick around Dalhousie for an additional year, completing a second major and an honors thesis on the subject of Traditional Music in a Contemporary Moment: Musical Pan-Indigeneity as Revitalization in the Wabanaki Region. The region is a confederacy of five indigenous nations including the Wolastoq and extending across the current provinces of New Brunswick, Nova Scotia, Prince Edward Island, and Quebec, and the state of Maine. The thesis title took the form of a mission statement for Dutcher, who was led to the wax recordings by a living tribal elder, sweat lodge keeper, and First Nations ambassador, Maggie Paul.

“I made my way to Ottawa [the site of the Canadian Museum of History] and went down into the basement archives there and threw on some headphones and started a journey,” Dutcher recalled for an NPR presentation last year. “To not just hear the songs, but also to hear the background noise and to hear them laughing and telling jokes — there was a sense of entering into that space through these voices. And that was something that changed my life.”

The Dalhousie anthropology faculty have declared in writing their admiration for where their alumnus has taken his education and his life. “Dutcher went to those recordings and undertook the long and painstaking though very exciting tasks of deep listening, musical and linguistic transcription, and re-composition,” they testified. “Dutcher honors intergenerational connections, his voice singing on with the voices of his elders … It disrupts widespread expectations of indigenous music as a thing of the past, and shows instead how it lives in the present, fully capable of working and remixing in contemporary idioms. This has a decolonizing effect, in that it unsettles public conceptions that all too often primordialize and essentialize indigenous art forms.”

My own musical experiences and conversations in Montreal suggested that the Canadian government and entertainment industry, as well as its institutions of learning, may have achieved and put in practice a higher degree of consciousness about indigenous culture than is present south of their border. “Increasingly, in Canada, we’re part of the dominant ideation of what it means to be Canadian,” Dutcher told me during our short chat, “and I don’t know that I can say the same about my American brothers and sisters, if they really feel like their histories and stories are made part of the American psyche. But, increasingly, our non-indigenous brothers and sisters are listening to our music and hearing our stories, and for me, that’s a really exciting thing. That’s why I’m coming down to San Francisco … where there are a lot of indigenous people.”

My YouTube research displayed an aspect of Dutcher’s performance style in larger venues that I hadn’t witnessed in the intimacy of the Montreal church basement. He’ll apply makeup and don dramatic costumes, something like a tribally respectful incarnation of Elton John. Further research revealed that he identifies as a ‘two-spirit’ person, and I asked him to explain the term.

“It’s an understanding of queer or LGBT people that predates European contact on this continent,” he told me. “The word in my own tribal language is actually ‘motewolon,’ which is tough to translate directly but might be a person of great spiritual power. It comes from a long tradition of understanding that LGBT people sit in the middle, between masculine and feminine, and that this is a place of power. It’s a fundamental 180 in terms of how, in dominant Western society, we think about queer people.

Dutcher reports having been able, growing up in New Brunswick, to “express the beautiful gift of being an outsider, a queer one, where we were so often the expressive ones, the ones that put on the shows. I used to clear all the things from in front of the fireplace and use it as my stage. I’d give hour-long concerts to anyone that would listen. The gayest little soul that ever did live! A big reason I got into opera and music in the first place was through theater, and I got into theater because I thought it was the only thing a little gay kid could do in New Brunswick. It was a shelter for me, and it was okay.”

In performances before a growing global audience, Dutcher insists that, “I want to celebrate, to wear things that represent my identity, both from an indigenous standpoint and from an LGBT standpoint, because for me, those aren’t separate identities. For a long time, we thought we needed to be wearing fringe or buckskin, or something that America or Canada thinks Indians are. But in this moment, we’re taking that back and saying, ‘no-no-no, we decide how we present!’ For example, at the Junos, I wore this six-foot-long cape, on the inside of which is written, in our syllabic language, ‘We will succeed!’” Under the cape, Dutcher sported a revealing bodysuit.

His appearance on the weekend of the San Francisco Pride Festival is, he clarifies “a very happy accident” of scheduling. “These festivals are special places of gathering,” he points out, and with a chuckle, ponders joining the fun beyond the Yerba Buena Gardens. “But I think I might need to bring some even more exotic looks, to really stun that crowd!”

Sascha Jacobsen Writes From His Roots

The bassist’s latest piece is a tribute to his Sephardic ancestors.

It’s a Great Time to Be Conrad Tao

The piano phenom and budding composer chats about his approach to Beethoven, his upcoming gig with the LA Phil, and the state of classical music.

The Bay Area chorus New Voices is for vocalists who identify as transgender, intersex, and gender-queer.

Goodbye, Mr. Chips Makes a Winning Transition to Opera in a New Film