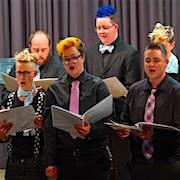 “The idea that we are one voice part throughout our lives is just not reality for a lot of people,” states Reuben Zellman. He’s a countertenor who was “raised female” and knows what he’s talking about, as well as singing about, as director of the New Voices Bay Area Chorus, whose vocalists identify as transgender, intersex, or gender-queer (TIGQ).

New Voices will be heard singing Ralph Vaughan Williams’s “Willow Song” (from the composer’s Elizabethan Part Songs) and Carly Simon’s “Let the River Run,” during the San Francisco Community Music Center’s (CMC) Spring Gala at the Intercontinental Hotel on May 11. The event, which will also feature former San Francisco Symphony keyboardist Robin Sutherland, will honor James C. Hormel and Michael P. Nguyen with the Gertrude Field Community Impact Award, for their support of the chorus, which formed after Zellman joined the CMC faculty in September, 2018.

Zellman says he pondered the need for a new sort of chorus while directing the Treble Singers at San Francisco State University, where he also teaches ear training, musicianship and introductory guitar. “I had increasing numbers of undergraduate students who said, ‘I really want to sing with [the Treble Singers], but I feel kind of uncomfortable, because I don’t identify as a woman.’ That compelled me to think we gotta create a place where people can sing in a place that’s healthy for them, singing what they want to sing, and working towards the singers they want to be, without sacrificing the fullness of what they are as human beings.”

The unserved vocalists who came to Zellman’s attention also included males who’d chosen to transition to the female gender, and the inverse. “For transgender men who take testosterone, the voice lowers,” Zellman points out. “And for someone going through that vocal change, where singing was a part of their life before, now they have an entirely different instrument that they don’t know how to ‘play,’ or that they feel self-conscious about. They have lots of questions, and it’s hard to find places to ask them.”

As a child, Zellman himself wanted to sing alto, but sang tenor for a number of years. “We have fairly rigid categories for singers, so that makes things difficult,” he says. “SATB [the standard soprano, alto, tenor, and bass choral sections] is not a bad thing, but it does not cover everybody comfortably. In the typical classical choir, you see the men on one side and the women on the other, and they often have specifically different outfits they wear.”

The New Voices Bay Area Chorus has broken free of this rigidity. Instead of SATB, “We call the parts by numbers: Ones, Twos, Threes, and Fours, where Ones are the highest voices and so forth. And within every one of our sections, we have people of all different genders, and we have people who switch sections, not infrequently.”

This arrangement accommodates its community’s manifold approach to gender. “We have people who identify as male, as female, or as neither one and with a whole range of different backgrounds. These people are allowed to make choices about where they sing, to feel as healthy and comfortable as possible.”

Zellman recalls that 20 years ago it was difficult for other musicians to comprehend a female-to-male trans person like himself singing countertenor repertoire. “I felt that I really was nonbinary, but in the world at that time, it was dangerous to have a nonbinary appearance that didn’t fit into people’s presumed categories. But now you can do this, especially in places like the Bay Area, which is really wonderful! Now, in the chorus, we all have name tags that also have everyone’s pronouns on them. We still sometimes get each other’s pronouns wrong, but we don’t make assumptions as frequently.”

The chorus’s diversity in gender identification and preferred pronoun is matched in other matters. “For age, we have juniors and seniors in high school, all the way up to senior citizens in their 70s. We have a whole mix of racial, ethnic, and religious backgrounds. We also have beginning musicians, all the way through people with professional singing careers. And the fact that the poverty level is very high in this community is one of the reasons we’ve made participation in the chorus free of charge.” A grant from the CMC, which funded a symposium for voice teachers and singers on “Trans and Singing” in February of this year, is also providing one-on-one training for chorus members by CMC faculty. “Possibilities for trans people across the board, in music or not, are much greater than they used to be,” Zellman assures, “though we still have a long way to go.”

Although he’s an ordained rabbi with Berkeley’s Congregation Beth El, Zellman sings with the Grace Cathedral ensemble. For his New Voices Bay Area Chorus, he seeks out pieces which avoid “gendered messages.” He notes that even a transgender composer such as Mari Valverde, who has provided repertoire to the chorus, “has referred to men and women, which I wouldn’t do. Across all genres of music, including classical and pop, women’s ensembles have gotten a lot of birds and flowers, and men get a lot of sailor songs. So we need to make adjustments, picking music that will be moving, gratifying, challenging, but learnable, fitting the voicings of the ensemble, and communicating the messages we want to communicate.”

The lauded choral conductor/composer talks about his concert-length musical response to a notorious anti-gay hate crime.

An immersive performance experience takes participants through the streets and hidden corners of San Francisco.