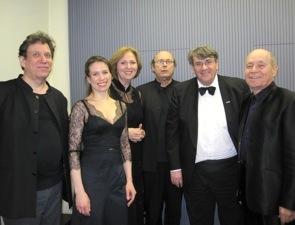 If current economic tensions can force even major orchestras in Philadelphia and Syracuse into bankruptcy, they can also make it tough for smaller-scale ensembles to sustain operations. The Gold Coast Chamber Players recently encountered this problem firsthand, when a planned joint concert with the Netherlands-based Amati Ensemble became threatened by funding concerns. But thanks to some perseverance and creative juggling, Amati will make its West Coast debut with Gold Coast in “Amati Gold,” a May 2 concert in Lafayette, featuring Brahms’ String Sextet, Op. 18; the Sextet from Richard Strauss’ opera Capriccio; and Mozart’s String Quintet, K. 516.

“The idea for Amati Gold originated with a personal invitation last summer by the Amati Ensemble to join them for a North American tour sponsored by the Romanian government,” explains Gold Coast violist and Artistic Director Pamela Freund-Striplen. There was a nationalistic underpinning to the collaboration, which aimed “to promote a Romanian composer [George Enescu] and, if possible, to feature a young professional Romanian violinist.”

Freund-Striplin had previously collaborated with Amati’s principal violist on other projects, and the two parties began formulating plans. Amati would send over six ensemble members to perform with Freund-Striplen and cellist Tamara Bohlin, in a tour starting locally and then moving to New York, Washington, D.C., and Los Angeles, with the possibility of stretching into Canada and Mexico. Enescu’s Octet for Strings would be the artistic showpiece, along with the Brahms Sextet.

Then, less than a month before the tour was to start, the Romanian government slashed the Amati’s grant by 75 percent. The ensembles quickly made several adjustments. Performances outside the Bay Area were scrapped, and Enescu was replaced on the program by Strauss and Mozart. The Romanian Embassy in Washington stepped in with emergency funding, and the concert is now presented “under the high patronage of the Embassy of Romania.”

Gold Coast and Amati managed to salvage some important aspects of the arrangement. “Two of the key members of the Amati are still coming for the concert: the leader, violinist Gil Sharon, and principal violist Ron Ephrat,” says Freund-Striplen. “Sharon has an impressive list of recordings, and performing with him is certainly one of the highlights of my career. We are all thrilled with the replacement program. We are equally thrilled to bring on board a leading violinist in this area, Franklyn D’Antonio [concertmaster of the Berkeley Symphony], and his former Trio cellist, Andrew Cook from Los Angeles.”

Even with all the shakeups, the Amati Gold program retains some unifying thematic ideas. “The original program linked the very orchestral Enescu Octet with the Brahms Sextet. ... The program was to have been chamber music of an orchestral nature,” says Freund-Striplen. “With the replacement program, we are linking Brahms’ classical leanings with one of Mozart’s most beloved chamber works. Mozart’s G-Minor Quintet is a rare exploration of his darker side, with an outpouring of emotion more typical of Brahms.”

Freund-Striplen knows a thing or two about last-minute changes, as she herself was involved in one last month for Amati’s own concert series in the Netherlands. “They had a program of both Brahms sextets and the Sextet from Capriccio, and their second violist canceled one week before the performance. I received the call that many dream of — to join them, last minute, for this amazing program. The concert was a huge success, with their audience giving a standing ovation after each piece!”