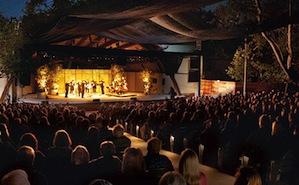 The 66th annual Ojai Music Festival just keeps growing. This year’s festival (June 7-10) will feature no fewer than 10 concerts over four days and will then transfer to the Bay Area in the two-year-old partnership with Cal Performances, Ojai North. Many of the main attractions will be seen at Zellerbach, including John Luther Adams' acclaimed Inuksuit. This includes a pair of newly added late-night gatherings at the outdoor Libbey Bowl (June 8 and 9) that begin at 10:30 p.m. Add two day-long symposiums, a brace of film screenings, and an assortment of optional activities, and you have one jam-packed event.

A unique aspect of the Ojai Music Festival is that the position of music director changes every year. This summer, the man in the catbird seat (both on stage and behind the scenes) is the Norwegian pianist Leif Ove Andsnes. Working closely with Festival Director Thomas Morris, Andsnes has put together a full roster of performers that includes conductor/composer Reinbert De Leeuw and members of the Norwegian Chamber Orchestra; the renowned German actress Barbara Sukowa; pianist Marc-André Hamelin; percussionist Steven Schick; mezzo-soprano Christian Stotijn; clarinetist Martin Fröst; and violist Antoine Tamestit. This year’s featured composer is John Luther Adams. 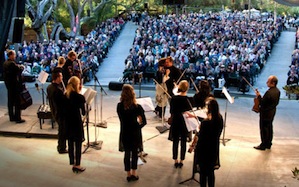 The concert schedule is wide-ranging and includes such diverse compositions as Ives’ Concord Sonata, Mahler’s Rückert-Lieder, Copland’s Clarinet Concerto, and Shostakovich’s Six Poems for Marina Tsvetaeva, along with works by Kurtág, Hillborg, Buene, and Berg.

The two pieces are as different as night and day. Inuksuit (a reference to the Native American stone figures that dot mountain peaks from British Columbia to Alaska) is a free-form, 80-minute musical happening conceived, according to Morris, “ to be performed outside by anywhere between 9 and 99 percussion players.” The performers will fan out through the oak-tree-dotted walkways of the festival’s Libbey Park. The audience is then encouraged to wander throughout the piece, from place to place, thus experiencing an ever-changing array of rhythms and instrumental mashup. “It’s very mystical,” says Morris.

A unique aspect of the Ojai Music Festival is that the position of music director changes every year.

Speaking of Im wunderschönen Monat Mai (which means “In the Merry Month of May”), De Leeuw, speaking from his home in the Netherlands, recalled how the work traces its roots all the way back to 1984 when he first collaborated with the renowned film and stage actress Barbara Sukowa.

“I had seen her in Lola [a 1981 film by Rainer Werner Fassbinder], and she was amazing. I approached her about performing the incredibly difficult vocal part in Schoenberg’s Pierrot lunaire, which was originally modeled on the cabarets of prewar Berlin. Barbara is a remarkable actress. And although she is not a trained singer, she does sing very well and reads music.”

It was in 2003, De Leeuw said, that the two decided to join forces again to perform a totally reconceived song cycle that the composer describes as “a postmodern riff on lieder by Schubert and Schumann.

“These works were like the pop songs of their day. Everybody knew them. But, over time, the presentation of song cycles has become such a rarified experience,” De Leeuw explained. “Our idea was to bring back these songs within a whole new dramatic context and musical dynamic. There are 21 songs in the cycle [it’s scored for 15 musicians]. A few incorporate the original music. The rest are completely different, and the range of expression for the vocalist is extreme, from soft and soothing to singing and screaming.”

The two decided to join forces again to perform a totally reconceived song cycle that the composer describes as “a postmodern riff on lieder by Schubert and Schumann.”

De Leeuw recalled the work’s premiere at the Holland Festival in 2003. “We were both very nervous. We knew there were going to be purists in the audience that were going to be outraged. But in the end, the reaction was tremendous. People were cheering. Since then, we have performed the work many times in Europe and in New York. So, when Lief was appointed the music director for Ojai, he called me and said he wanted to include the work in the festival. I was thrilled. I have heard so much about the Ojai Festival, but I have never had the chance to attend. Also, we have never performed the piece outdoors. That could add a whole new element.”

At the conclusion of the four days of music making in Ojai, a slightly condensed version of the festival will head north to Berkeley, where it will be presented at Hertz Hall by Cal Performances June 12–14.

Im wunderschönen Monat Mai (with Sukowa) will be presented at 7 p.m. on June 13. And a must-see free performance was just added to Ojai North: On June 11 at Hertz Hall John Adams' Inuksuit will be conducted by Steven Schick of red fish, blue fish, and the S.F. Contemporary Music Players. This expansive spatial work for nine to 99 percussion and piccolo players and 24 musicians was named by The New Yorker's Alex Ross as one of the greatest performances of 2011.