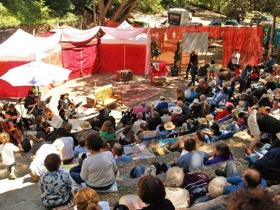 “Oh, Porta-Potties! I had forgotten about that,” reflected Elizabeth Baker with a booming laugh, as her cofounder, Ellen St. Thomas, retold horror stories from Open Opera’s first season of live operatic production. “We were totally unprepared.”

Open Opera is a Bay Area nonprofit organization that performs opera, free, for the public and makes use of the region’s great local talent, students and professionals alike. The organization was founded in October 2008 by Baker, St. Thomas, and Olivia Stapp, who also serves as the organization’s artistic director. “The financial crisis would normally be an opportunity to run and hide,” said St. Thomas, “but we decided to take the opportunity to be courageous.”

“We decided to do classical music in the parks,” Stapp explained. “People were dropping their subscriptions to the opera, [and] live classical music was harder to get to ... from there, we decided to do Marriage of Figaro.” What distinguishes an Open Opera performance is both its professional pedigree and the relaxed viewing environment — audience members are invited to move around. “They did that in Mozart’s case,” said Stapp. “So I thought, ‘If we can loosen up the etiquette, it would be so much more agreeable.’”

“We have kids who are up in the trees, the dog walkers, the smokers, the nursing mothers,” Baker continued. “Wonderful, interesting relationships [begin to] emerge.”

“We want people to bring their children, their families,” Stapp continued, “to experience opera in a not so pseudo-religious environment.”

“It’s very open, as the name implies,” explained Jonathan Khuner, assistant conductor with the San Francisco Opera and Open Opera’s resident conductor. Since its inception, the organization has already served over 3,000 people.

Although it’s only in its second season, Open Opera’s performances endure a weighty, months-long planning process. Repertoire is decided in committee and often requires editing down and restaging — also a collaborative task. “Three hours is too long for a family opera show,” Khuner noted. “In this case, with Don Giovanni ... I wanted to cut at least 20 minutes from the opera.”

Auditions begin about six months before a performance. “Each candidate will come in,” explained Khuner, “[and] they have to sing for five to 10 minutes so we get a feel for how they’re going to sing the roles.” Directors assess candidates on dramatic presence, musicality, an understanding of the language in which the opera is written, and an overall look for the part. “We try to optimize the role with the best person,” Khuner continued. Once the cast is assembled, directors coordinate aspects of the selected performance. “[We have] to decide which version [of Don Giovanni] to choose,” Khuner explained. “We start discussing interpretation, speed, how we’re going to coordinate ... [we] arrange, learn, and drill the staging.” About 100 hours of rehearsal are put into an Open Opera production, which does not include time spent coordinating computer supertitles, renting costumes from local opera companies, or building sets. Singers run through a performance in the public venue space two or three days before the opening.

Although Open Opera provides free admission for each performance, production can cost upward of 10 percent of the expenses of an average staged opera. “I imagine it costs somewhere around $50,000,” Khuner said. High costs stem from the hiring of a professional orchestra, which runs the organization almost a third of their programming budget. Funding is supplemented by individual donors and foundation support. “We got a grant from the Hewlett Foundation last year, and that was seed money to get us going,” Baker explained. “They really encouraged us.”

“We are also experts in passing the hat,” added St. Thomas. Individual support has been overwhelming and audience response effusive. “It’s always very gratifying,” Khuner stated. “They come up and they say, ‘This is great. I just put $20 in the hat.’”

“This wonderful woman [came up to me],” Baker commented, “and said, ‘I don’t mean to boast, but I travel the world to watch opera, and I have seen Marriage of Figaro a dozen times. This production was amongst the top two or three of my life.”

“One reaction you don’t have,” Khuner continued jokingly, “is someone coming up and saying, ‘Hey, I want my money back.’”

“We’re in the trenches building opera audiences for the future,” St. Thomas said. “What we hope we can set is a precedent that arts can be homegrown and emerge from any community,” to which Baker added “[that] any midsized city in the country can have an arts organization that can grow and thrive.”

The organization has not started planning its next season, though, artistically, St. Thomas promised, “the sky’s the limit.”

Open Opera will mount four fully-staged performances of Mozart’s Don Giovanni in Berkeley’s 700-seat amphitheater located in John Hinkel Park, starting this weekend. “Don Giovanni is an opera classic,” Khuner explained. “It’s about people and their power and sexual relations between them. And that’s always timely.” The audience can look forward to some familiar faces, with returning Open Opera alumnae Angela Moser and Aimee Puentes. Concessions will be available during a 15-minute intermission, and the audience is even encouraged to bring food. Restroom facilities are located on site. Parking is limited.

“In every performance there’s always something that can go wrong,” Khuner commented. “Dogs can wander in ... [there’s] noise from fire engines ... the orchestra is on the side of the performers instead of the front, [but] it makes it more exciting. ...[We’re] always in danger of falling apart or coming unglued!” Despite it all, the joy, for Khuner, is in creating an operatic masterpiece as best he can — transporting the audience to another time and place.