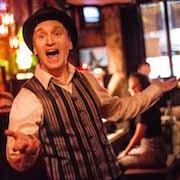 Opera on Tap Takes Opera to the People

Those four factors more than others have led to a revolt and populist uprising, as professional opera singers involved with Opera on Tap stride bravely into bars and pubs across the United States and internationally. The nonprofit’s intimate presentations attract new and traditional opera clientele with shows that pair a casual night out for a drink with arias and excerpts of operatic works by established, master composers or some of the genre’s most-promising, rising stars. Offering a user-friendly approach and high caliber singers, the program founded in Brooklyn, New York, by Anne Hiatt (formerly Anne Ricci) has since 2005 grown to become a registered nonprofit with 23 chapters.

“Maybe it’s a kind of blessing,” Hiatt says in a phone interview. She’s talking specifically about the negative impact of the internet on live opera performances. But the comment, applied broadly, speaks to the pivots that classical music and opera companies make to secure a thriving audience base. “As we become a culture living online, grand opera houses have to rethink themselves. They need to figure out how to get out in the community. That’s something the industry has to wake up to. It’s just clear that there’s a definite trend across the performing arts that there’s an audience seeking a more immersive experience.”

Teasing out the audience-artist dynamic into a network that functions not to deconstruct but to rebuild enthusiasm for opera has resulted in multiple offshoots. “We’ve gone in all directions,” says Hiatt. “We do classics and commission new works (a recent example: The Parksville Murders, a virtual-reality horror opera) that premiere in New York and tour to other chapters. But the bar show [Theme of the Month] series is the flagship because it mixes up new and classic work. It’s flexible for the audience and represents the full range of the repertoire.”

In addition to the bar series and the Roadwork series performed in larger, alternative venues, there’s the Playground Operas, a pilot educational program. “We’ve started the schoolyard performances at a public school in New York with a little bit of National Endowment funding. We may expand to Boston next. Bringing art into the communities is really what’s special about the programs,” says Hiatt.

Anticipating the next curve in opera presentations, Hiatt says augmented and virtual reality are likely elements — as is immersive theatre, like the 2011 play, Sleep No More. The site-specific work is a contemporary adaptation of Macbeth, but its novelty is largely found in that the audience roams freely through a series of rooms and five floors of a hotel as they watch the play. For three hours, people shape their experience through unique, individual patterns.

“People like to lock in and be a part of art,” says Hiatt. “It’s related to the online shift. You walk into a hotel and experience it differently, depending on where you are.”

In San Francisco, Opera on Tap S.F. anchors itself at The Rite Spot Café on the third Sunday of each month. Cofounded in 2011 by neuroscientist and operatic soprano Dr. Indre Viskontas and Katherine Gerber-Biswas, the chapter’s 70 singers appear in the bar shows and participate in the group’s semistaged productions. Whether collaborating in traditional mainstage theaters with theater groups — in the past, California Conservatory Theater in San Leandro, Exit Theatre, and others — or performing in a bar, Viskontas says live performance experience is essential for singers.

“I teach a class in which I say that the only way to improve is to get on stage, but classical singers are told they have to be perfect to get on [opera house] stages. That has meant young singers weren’t on stage enough to get over anxiety and those things that happen in performance.”

The bar show Feb. 19 at The Rite Spot is themed “Love Around the World” and will feature six to 10 singers. There’s no cover, no fee. People are free to walk around, but talking during the 20-minute sets is gently discouraged by the night’s MC. While a tip jar is passed to support the program, audience members are welcome to attend regardless of their ability or desire to pay, says Viskontas.

Opera on Tap S.F. and Symphonia Caritas will present a semistaged rendition of Mozart's La clemenza di Tito at the Episcopal Church of St. John the Evangelist in San Francisco. Ticket sales from the performances April 28 and 29 will support the Gubbio Project’s programs to serve the homeless. Viskontas says the opera’s story of a leader who must search his heart for mercy dovetails with the Bay Area’s current housing crisis and a political climate during which the underserved are at risk of being overlooked.

Speaking about why people are attracted to Opera on Tap and what is needed for the art form to continue to thrive, Viskontas is unequivocal. “Opera has never been irrelevant, unless the industry has set up barriers. Those barriers have been financial: ticket prices over $100. And there’s a demand that people enter already informed. All classical music has done that. We musicians are fighting against the notion that you have to be rich or highly educated in opera to enjoy it.”

Whether traditional or contemporary operas are showcased, Viskontas says, is not the main criteria determining the success of a bar show. “It’s powerful music. Whether it’s written yesterday or 300 years ago, it doesn’t matter. If I can show why the music is amazing with my performance, I’ve done my job.”

The passionate, political rhetoric streaming from people worldwide during the last three months, she suggests, represents engagement, regardless of which side of an argument is taken. Similarly, opera deals with deep emotions and universal themes. “In a way that almost no other genre can match, opera is getting at big struggles. There’s catharsis watching a performer go through that.”

Opera on Tap audiences divide into “aficionados,” who come every month because the shows are fun and contemporary, and “newbies,” often millennials and people in the tech industry who Viskontas says are seeking “weird, unexpected things to do.” What they have in common is a desire for music that connects to their daily lives. In the show just after the presidential election, Viskontas sang Tosca’s Vissi d’arte as if she was Hillary Clinton. The aria is basically about “I’ve given everything to my art.” Viskontas decided it was an accurate portrayal of the energy Clinton has devoted to politics.

But just like a cookie isn’t a substitute for dinner at a five-star restaurant, the singers in Opera on Tap know there’s no substitute for a full production. Which brings the entire matter back to where it began: finding future promise despite limitations by redefining what at first appears to be a downturn into a growth opportunity. “We know that we’re stripping away the orchestra, costumes, and things that are in the concert hall,” says Viskontas. “It’s a club-show model. We want Bay Area singers to be great when they get to San Francisco Opera and larger stages.”

Opera with cocktails? Following the Classical Revolution formula, opera is given the informal treatment again.