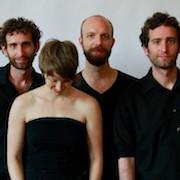 Majel Connery, vocalist and member of the four composer-performer chamber group Oracle Hysterical, has the temperament of a lion tamer.

During an interview, Connery remains unperturbed when a piano delivery company arrives 30 minutes early and interrupts. “It goes in there,” she says, ostensibly leaving the movers to find their way. Moments later, hearing mysterious sawing sounds from the direction in which the piano was taken, her only thought is to wonder what might need trimming.

She won’t even be disturbed if sawdust is left behind, because musty; dusty relics are her thing. “We take old musty and dusty texts and invigorate them with pop- or indie rock-inflected music to bring them to life for a modern audience,” she says, sketchily describing the repertoire of Oracle Hysterical.

Collaboration is key within the New York City-based group and extends to include projects undertaken with a variety of ensembles. The upcoming concert May 13 led by conductor Stephen Prutsman at Starline Social Club in Oakland features Oracle Hysterical joined by a 10-piece hand-selected ensemble of Bay Area professional musicians.

Connery holds an M.A. and Ph.D. in ethnomusicology and musicology from the University of Chicago. She is co-founder and executive/artistic director of the avant-garde opera company Opera Cabal. Currently the Mohr Visiting Artist at Stanford University, she recently taught a seminar, “Theatricality and the String Quartet,” and is completing two commissions for voice and string quartet. The 20-minute works are a collaboration with Pulitzer Prize winner Caroline Shaw and the Saint Lawrence String Quartet.

Approximately one year ago, Connery tried to start an ensemble based in the Bay Area. “I don’t like the word “no,” so when it didn’t work out,” she says, “I decided to design an encounter around which to develop an ensemble.”

The “encounter” forms around the Starline concert’s trio of works: Doug Balliett's Cleopatra cantata, based on the writings of the ancient historian Suetonius; Elliot Cole's song cycle, Babinigar, an Afghani folktale about a snake king and his human bride; and Brad Balliett's concerto for solo bassoon, In Triple Time. The invited ensemble players, Connery says, are from The San Francisco Contemporary Music Players or are musicians recommended by Saint Lawrence String Quartet violinist Owen Dalby.

Connery’s eagerness to partner with other ensembles and compose new works is driven by twin engines. “I’ve been a bad solo player. It bores me. Working with new groups enlivens the creation. Also, Oracle Hysterical has an awkward instrumentation. There aren’t a lot of works for harmonium, drummer, two voices, two pianists, bassoon, viola da gamba, double bass, and electric guitar.”

Nor are there works written that knit together texts that have withstood millennia with new music that includes white boy rap and pop influences, Gilbert and Sullivan-like opera, Hollywood with Baroque interweaves, and—played by Brad Balliett as only he can play them — bassoon multiphonics.

Connery says In Triple Time, without Balliett’s skill, is virtually unplayable. “He’s the only bassoonist in the world who can play it. Connoisseurs will appreciate the difficulty.” The layers of sound often cause people to ask, “How is he making all those sounds?” she says. “We explain that he can play a straight A and that’s it. Or he can overblow and create all kinds of tones.”

Oracle Hysterical’s works also span multiple time periods. Suetonius was a Roman historian born in approximately 69 A.D. “He was like the People Magazine of that era,” says Connery. “He was only interested in the people and what they were wearing. The result is delicious. Doug throws himself off the ledge as a composer: This work flies in the face of austere, new music. It’s blatantly Disney-esque, but then moves into classically demanding music.”

About Babinigar, a piece that was Connery’s gateway into the preexisting group when she joined in 2013, she says it is a fun version of opera. “It fills a hole in new music. It is rigorous and difficult; a love story that ends tragically. The lush, tonal sound world will cause people who think they don’t like contemporary classical music to like classical music.”

Connery recalls that before she joined Oracle Hysterical, the group was rougher, more ragtag. “They started in 2009. It was rap cantatas: textural, rhythmically based orchestrations with fast-paced, white-boy rap overlaid. They were jocular, used projections, and it involved Brad and Doug who are twins and there was the ‘wow’ of seeing them onstage.”

Which partly explains the lion-tamer aspect of her work. After all, to enter the lion’s den took courage and confidence. And “taming” in this case means adding vibrato-free, lyrical vocals, highly engineered and mastered recordings that require up to five years to create, and professional marketing and management to support multiple projects and touring. But at its heart, the group remains what Connery self-describes as “nerdy teachers drawn to the tactile nature of digging up old stuff and breathing new life into it” by way of omission or “taking an ax to material we work with.”

A 20-minute talkback following the one-hour performance will allow the audience to learn how Oracle Hysterical finds and selects the texts and hear stories about how four composers collaborate to create Oracle Hysterical. 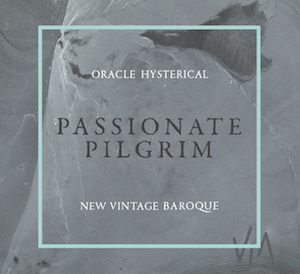 Passionate Pilgrim (VIA Records). Tracks on Soundcloud. Reviewed by Allan Kozinn in The Wall Street Journal

Hecuba (not yet released). Tracks on Soundcloud. Reviewed by Peter Margasak in the Chicago Reader