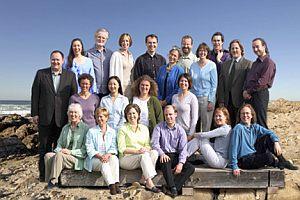 “The idea for marking the anniversary was to celebrate what makes us unique,” said SFCA’s artistic director, Magen Solomon. “In the 15 years I’ve been with Choral Artists, we’ve premiered about 150 pieces. The anniversary concert features only pieces that we’ve premiered.”

And those premieres include two for this concert, a setting of W.B. Yeats’ poem “The Cat and the Moon,” by composer-in-residence Brian Holmes, and three Emily Dickinson poems (“To Hear an Oriole Sing,” “Hope Is the Thing With Feathers,” and “I’m Nobody”) set by composer-not-in-residence Christopher Marshall.

“It highlights all these programs,” Solomon remarked. “Composer-in-Residence we inaugurated in 1999. We’ve had theme-based Composers Invitationals forever. And the New Voices competition celebrates three composers under 30. The Composer-Not-in-Residence program started this year. We continue to focus on different ways of working with composers.”

Solomon commented on several of the pieces and composers: “John Kelley’s a former singer with SFCA. His Sonnet 25 has a didactic turn to it; a wonderful piece. Charles Griffin’s Rekviem is a beautiful requiem — dark, almost threatening. Kirke Mechem’s setting of Richard Corey is perfectly balanced, the words perfectly set. Russell Burnham is known for chamber, not choral, music; his Sonnet #3 is Rilke, in English: a masterpiece. I wish his choral music was better known. Paul Crabtree’s First and Last Kiss is spectacular: The speaker is sitting by the body of his beloved, whom he never told what he now realizes — stunning harmonies and musical language; great colors and textures.”

Solomon mentioned two other pieces: “Jerry Mueller’s Fireworks has the sound of people watching a pyrotechnic display. And Henry Mollicone’s National Weather Forecast contrasts the weather in California versus the rest of the country, in a jazzy 1950s style, to close the show.”

She also spoke of the new works by composer-in-residence Brian Holmes and composer-not-in-residence Christopher Marshall: “Chris Marshall’s Emily Dickinson settings are more playful, with a youthful element coming through in the style, in a different vein from what he wrote for us in March [This Big Moroccan Sea], which was dark, introspective; he’s a composer with range. Brian Holmes’ The Cat and the Moon is also lighter, with a more playful aspect; it’s delightful!”

The composers both in and out of residence commented on their new works. Holmes — who teaches physics and astronomy (and lectures on the physics of musical instruments) at San José State, besides playing French horn professionally — joked he’d “put my 4 percent” in as one of 25 composers, remarking that he’d known the Yeats poem for a while. “I was reading it, and thought, ‘I’ll set it.’ That’s a fast turnaround for me. Usually I think about a poem for a long time first. It’s a lighter, shorter piece, amusing yet serious — it goes along with the nature of the concert.”

Holmes talked about setting the poem, and about the poet. “Somewhere I read about [how] the relationship between the cat and the moon, their distance yet closeness, echoed Yeats’ relationship with Maude Gonne. I think Minnaloushe was her cat. I liked the idea of the cat creeping around, and tried to personify that in music, to juxtapose the musical elements of moon and cat, convey the very fanciful similarities he sees between the two to the audience ... the cat cautiously stepping around, with catlike pauses there. True Yeats aficionados might object to how I played with it, bringing the opening of the poem back at the end. A true musical gesture, but it fits as a way to end the piece — quietly, reconciling the differences between the two — and in the music, with the similarities between cat and moon.”

Marshall, who is composer in residence, teaches at the University of Central Florida, Orlando, and hails from New Zealand. He remarked that Dickinson “is not really much known there. I knew her name. I saw some of her texts on the Internet, and got musical ideas while reading them.” The poems were originally set for middle school choirs in England on commission, but were never performed. “They were far too hard for them. I rescored the pieces for SFCA, and they were much better. Originally, I set nine poems, then afterwards orchestrated them for wind ensemble, with the texts projected on a screen. They were played in Amherst, Massachusetts, Emily’s hometown, and went down extremely well there. I’m getting a lot of mileage out of Emily!”

Marshall commented that every time he reads the poems, “I have a different take on them. That doesn’t bother me. Music has the same kind of ambiguity. They’re all completely different, but all hang together as a unit. That’s a thing about me: I’m a kind of polystylist, with different musical languages. ‘I’m Nobody’ reveals her catty nature ... I see her looking in her mirror, casting aspersions on her peers. It’s sardonic, lighthearted — delightful. It shows her as a rounded human being. In another poem, there’s the image of her as a little bird: so beautiful, so cute. When I’m feeling down, it’s enough to cheer me up. These are as lighthearted and melodious settings as anything I’ve ever done.”

Marshall also spoke of Magen Solomon, with whom he’s corresponded for years while SFCA performed his work, though only meeting her once. “Too often there’s an artificial barrier between conductor and composer. Pulling rank, staking out territory: It’s so boring — and I’m not quick enough for that! Magen is one of the few conductors not involved with any of it, not pulling roles or playing games. ... It’s refreshing to ask her opinion; I don’t usually get that sort of frank feedback. That’s why this year [as composer-not-in-residence] has been one of the most rewarding in my career. I wish it wouldn’t end.”

Marshall will finally be able to attend a San Francisco Choral Artists concert, on Sunday afternoon, June 13, at St. Mark’s Lutheran Church in San Francisco, on his way to visit family in New Zealand.

On being asked his reaction, anticipating the historic meeting between composers in and not in residence, Brian Holmes deadpanned, “Won’t that break the contract?”