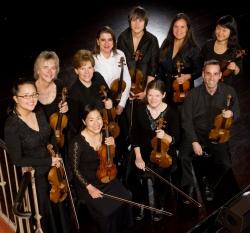 Nadja Salerno-Sonnenberg, the music director of New Century Chamber Orchestra, has made it clear that she doesn’t want her orchestra pigeonholed. So when she signed up her pal William Bolcom to be the orchestra’s featured composer this year, she gave him the widest latitude possible in his commissioned piece.

“I told Bill to do whatever he wanted,” Salerno-Sonnenberg reports. “I said, ‘If you need wind players, we’ll get wind players — whatever you need.’ There were no restrictions. So I was surprised when he came back and told me he was writing a violin concerto for me, because I really hadn’t asked for that.”

If you were Bolcom, and a world-class violinist asked you to write a piece for her orchestra, wouldn’t you think about a concerto? It’s not so difficult to see the logic: A concerto can get packed in the virtuoso’s bag and taken around to other orchestras.

But Bolcom was inspired by his previous work with Salerno-Sonnenberg. They first collaborated in 1993 on the premiere of the Third Sonata (Sonata Stramba), which he wrote for her and which they played together at the Aspen Festival that year. “Bill was so great to work with,” recalls Salerno-Sonnenberg. “A lot of composers can be really rigid about what they wrote, but Bill was open to my input.” That’s natural, because he’s a performer with many award-winning recordings under his belt.

Bolcom, too, has fond memories of that encounter, yet the opportunity to feature Salerno-Sonnenberg in a new piece was not lost on him. Last year, he told SFCV in an interview, “When you’re listening on the radio, you know it’s Nadja the minute you hear her — which used to be true of many more fiddlers, and I have to say that, right now, more of them sound alike than different.”

The composer reports that his new concerto is “sweet and accessible; not my thorny style at all. I wanted to do sort of a lyrical piece for her as soloist, with not too much pyrotechnics. I wrote it for Nadja. It’s a very un-show-offy violin concerto, and I hope it will be fun to listen to. I’ve done plenty of pieces that will scare the bejesus out of you, and this will be much milder. It’s just strings; I’m not using any winds.” He’s even titled it Romanza, which is a little violin genre all to itself (Beethoven wrote two of them).

Bolcom is well-known for his interest in the American vernacular, and his music, even when it’s not dealing with ragtime or classic popular song, has those styles in its genetic code. So Salerno-Sonnenberg has sensibly paired the violin concerto with two other lyrical works by American composers: Samuel Barber’s passionate Adagio for Strings, and Aaron Copland’s folksy, occasionally spiky Appalachian Spring, in its original version for 13 instruments. That music, too, was in Bolcom’s ear as a young composer, and so this concert draws attention to the very different ways that American composers have dealt with their combined inheritances.