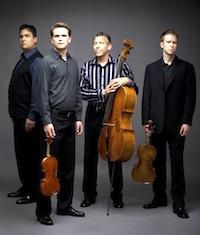 Turtle Island Quartet has been touring the U.S. for the past several months playing selections from their Jimi Hendrix album Have You Ever Been...? This weekend they return to California with a set at Yoshi's San Francisco.

Their interpretations might not have the bite of the originals, and certainly not the visceral charge of Hendrix' live performances, but if you're willing to accept Hendrix at half-throttle, you'll find this show fascinating.

The songs themselves have a lot to recommend them, and TIQ's players blend the rhythms and melodies in artful ways, while still throwing themselves at the music with all the energy they can muster.