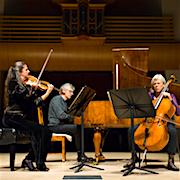 Viewed from 21st century forward tilt perspective, you might think modern day, musical must-haves would include the newest music streaming app and the latest plastic-lined, hard bore bassoon, but you’d be wrong.

For when it comes to musical experiences and instruments — specifically centuries-old tunes played live with period-specific instruments — old style might be, counterintuitively, more progressive.

Which makes the Valley of the Moon Music Festival, July 14–29 in Sonoma, that features Classical and Romantic-era repertoire and instruments a radical, upstart event. Now in its fourth season, directed by founders Tanya Tomkins and Eric Zivian, this year’s focus is captured by the festival’s title: “Vienna in Transition: From the Enlightenment to the Dawn of Modernism.”

The program traipses from a less-familiar 1771 Oboe Quartet by Johann Baptist Vaňhal through chamber music by Mozart, Beethoven, Schubert, Haydn, Schumann, and more. Ending eight years into the 20th century with Schoenberg’s Second String Quartet the series draws historic connections between composers and uses historically-informed practice for every work.

Along with highly-regarded guest artists, the performances present student and young professional chamber musicians selected for the festival’s Apprentice Program. Wine-and-music pairings and a special dinner at a local winery (along with recommendations for accommodations and other entertainment), introduce visitors to Sonoma’s pleasures. The new Blattner Lecture Series introduces presentations from scholars and professional musicians.

Bassoonist Kate van Orden has participated in all but the inaugural festival. Before joining Harvard University's faculty in 2013 as Dwight P. Robinson Jr. Professor of Music, she taught at the University of California, Berkeley. Van Orden holds a Ph.D. in Music History and Theory from the University of Chicago and is an editor and the author of several books on music history. In the Bay Area, she has performed primarily with Philharmonia Baroque Orchestra.

The festival has consistently been forward-looking says van Orden. “The fact that [some of] the apprentices are coming back as fully-fledged players is a wonderful evolution. In terms of repertoire, the festival’s testing the limits, pushing forward the chronology.”

This year, along with the inclusion of a Schoenberg selection, van Orden will lead a lecture and discussion that addresses issues raised by the composer in a talk he gave in 1933. Schoenberg’s “Brahms the Progressive” suggested the stereotype of Brahms as a conservative was incorrect. “Brahms was considered traditional and conservative in his time,” says van Orden. “But Schoenberg’s essay is a reversal. By calling Brahms progressive, he’s being provocative. He’s seeing something fresh in repertoire that’s had so much persistent attention that it gets stuck in its own groove.”

That “something” Schoenberg heard includes powerful chromatic harmonic language, irregular phrase lengths, and slides or vibrato van Orden says are evident in early recordings that bump Brahms’s music out of today’s static profiles and performance styles. “Brahms has been sanitized in performances across the 20th century,” she says. “We can make him juicier in a way that’s been lost.”

“Listen, the 19th century is when composers became aware of musical progress and how their music fit into it,” says van Orden. “Today, we accept forward motion as a given positive because we’ve been living with that value for so long. But we land with fully-fledged repertoire and modern instruments to play it. Brahms composed in a period of transition. With period instruments, one hears the striving. The music sounds less sure of its authority. It shows a progression of becoming during the Romantic period; it has the authenticity of struggling.”

In addition to the period specific bassoon’s variability, van Orden enjoys having direct contact with the airstream. “There’s no key between my finger and the tone holes. It’s so much more intimate than a modern instrument, where you’re separated from the sound production.” (As an important aside, van Orden says modern bassoons forfeit unique sound but also offer advantages: greater volume for today’s larger concert halls, more stability of sound, less vulnerability to climate-based variables.)

Van Orden’s fondness for the bassoon’s woody sound and variety of color began instinctively, with a minor push from her mother. “She was an amateur oboist. My sister played French horn. My mother wanted to form a wind quintet. She told me there were too many flutists in the world. (A friend and flute professor at the University of Iowa and a local dentist who played the clarinet were already lined up.) She told me to try the bassoon. So I guess I’d say she was strategizing.”

About the first of two works she will perform at the festival, Beethoven’s Quintet for Piano and Winds, van Orden says it’s all about the piano. Seated close enough to touch the hammers as they hit the piano strings, she finds the proximity energizing. “The piano leads and we’re like the vocal backup band. Beethoven has me often doubling the left hand of the piano, so it feels symphonic, big. But it’s intimate, because I’m right next to the piano.”

Schubert's virtuoso Octet in F major has van Orden playing very high in the bassoon’s range. “It’s like becoming a tenor if you’ve been a baritone,” she says. “It’s so nice though, because it’s not often an audience gets to hear us playing right up front there, in that high range.”

Asked about the contemporary music scene in general, van Orden appreciates that people are omnivorous listeners and composers. Cultural forces driving the field, she says, include new ways to record music, global file sharing, and period instrument performances as protest against the monoculture of orchestra and the control of star conductors. “Monoculture means everyone is playing on the same kind of instruments and there’s a desired sound. You’d be hard pressed to listen to a modern recording and say it’s this orchestra or that orchestra. [The move to] period instruments has the spirit of contemporary music, the avant garde, diversity. It’s pushing out against traditions. It’s progressive in the same way organic food is; trying to discover something heritage, something with more flavor.”

And yet, the most significant force that influences how she thinks about the future of music, van Orden says is the massive movement of refugees and asylum-seeking immigrants worldwide. “They all move with music. They bring it with them when they have almost nothing else. It provides solace. I wonder to what extent we can make that a solution? Can we find ways to acknowledge different voices collectively? Ways of hearing each other? Where people’s bodies are, music and dance are. It’s embodied culture. It has always been with us and always will be.”

The founders of the festival talk about its inception, the apprenticeship program, and why someone would have to be crazy to not want to visit Sonoma.