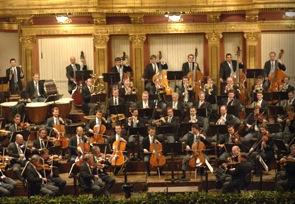 Vienna in the Bay

Would you like to hear the Viennese and Central European classics played by Vienna’s most prestigious orchestra? You could travel to Austria, but the Vienna Philharmonic plays relatively few concerts at home and tickets are difficult to get. For season subscriptions, there’s a waiting list over 10 years long.

Or, you could hear them right here. For the first time in 25 years, the Vienna Philharmonic is coming to the Bay Area — next week. The orchestra is giving three different concerts presented by Cal Performances at Zellerbach Hall in Berkeley on Feb. 25-27. After many years of the Vienna wanting to return to the Bay Area, this season its touring schedule worked out to allow a visit.

With three performances, there’s plenty of room to spread out the repertoire. The Philharmonic is bringing along a wide survey of the core of the Central European classics, by composers either from Vienna or for whom the then imperial capital was the center of the musical world. The focus is on the later years of that tradition, from the mid-19th century through World War I. Only one of the works, Schubert’s genial and courtly Symphony No. 2, predates the Philharmonic’s founding in 1842. Continuing on through history, audiences will hear Schumann’s Symphony No. 2, Brahms’ Symphony No. 2 — which the Philharmonic gave the first performance of in 1877 — Wagner’s Prelude and Liebestod from Tristan und Isolde, the suite from Bartók’s Miraculous Mandarin, and, to conclude the series on Sunday, the intense and emotionally wide-ranging Symphony No. 6 by the Philharmonic’s own one-time principal conductor, Gustav Mahler.

To lead them in this music, the orchestra is bringing along Semyon Bychkov, a 58-year-old Russian conductor who has been based in Europe and the U.S. for over three decades. He’s conducted the San Francisco Symphony often since 1989, most recently in Rachmaninov and William Walton last October. Bychkov first worked with the musicians of the Vienna Philharmonic 12 years ago in a series of Richard Strauss operas, and the production of Der Rosenkavalier they put on together is available on DVD. He first conducted the Philharmonic in concert in Tchaikovsky’s Symphony No. 5 at the Salzburg Festival soon afterward; then it was on to their home auditorium, the Musikverein in Vienna, for Bach’s B-minor Mass. And he’s been back frequently since. The programs we’re hearing at Zellerbach are all being played at the Musikverein this week before coming here, and then they’re being taken to Southern California after our turn.

Bychkov as I’ve heard him has been a conductor of great intensity, dynamism, and insight into the dramatic potential of large-scale symphonic music. That should make him an ideal conductor for works like the Schumann, Bartók, and Mahler on these programs. Certainly he has the enthusiastic vote of the Vienna Philharmonic. Like our local Symphony Silicon Valley, the Philharmonic is an orchestra without a music director. It hasn’t even had a regular principal conductor since the 1930s. More precisely, the orchestra is its own music director. It’s run by an executive committee of its own members, and they are responsible for inviting conductors to work with them.

The orchestra has a distinctive sound — what Bychkov calls a “Viennese dialect,” as characteristic as the Viennese dialect of German that most of the musicians speak. Even those musicians who come from elsewhere (like Bychkov himself) find common ground in the Viennese context. Growing up in Russia, Bychkov was reared on a foundation of German music — he played Bach and Mozart on the piano as a child — and his wide repertoire and his experience with Viennese music make him a good match, in the orchestra’s view, for music-making of mutual understanding.

There’s some discussion of the specifics of the instruments and styles of playing special to the Philharmonic on its Web site. It’s possible to make too much of this tradition, as if it were some kind of apostolic succession handed down from the days of the great Romantics, and some writers do. Both the orchestra and the conductor are concerned to disavow any notion of the Philharmonic having a unique authority. As Rudyard Kipling wrote about constructing tribal lays, there are nine-and-sixty ways of performing this music, and every single one of them is right. Clemens Hellsberg, a violinist in the orchestra and the chairman of its executive committee, says that the core of the Philharmonic’s tradition and quality is simply experience: its long history with these composers, and with all the great conductors and soloists they work with. Even if priority conferred authority, no one, as Bychkov points out, is still around in the Philharmonic who played in the first performance of Brahms’ Second. We don’t really know what it sounded like.

In truth, according to The New Grove Dictionary of Music, the Philharmonic was not Vienna’s leading orchestra until the time of Mahler in the 1890s. He was the taskmaster conductor who gave the Philharmonic the sheen that it has maintained since. The orchestra’s relationship with Mahler, and the music he composed, was a complex combination of admiration and frustration.  Since then, the preservation of the orchestra’s sound — its “incessant striving for highest quality,” as Hellsberg puts it — has been a passion. This has led to conservative personnel policies that have been controversial. Until the 1940s, auditions were not held blind. Seats were handed down from father to son. Only 15 years ago were the first women admitted to the orchestra, and there are still very few.

The unusual personnel policies, however, are key to understanding the Vienna Philharmonic. What really sets this orchestra apart from other first-class ensembles is that it is not a full-time concert orchestra. Though it is an independent, self-governing organization, all the musicians are, and are required to be, members of the orchestra of the Vienna State Opera, and to be of some seniority there before they are even permitted to apply for membership in the Philharmonic. This double-duty is one reason the orchestra plays relatively few concerts and tickets are hard to get. For Bychkov, as an experienced opera conductor himself, the opera background is the real key to the Philharmonic’s sound. Spending so much of their time, as they do, accompanying singers performing dramatic roles, he says that they bring that dramatic and theatrical approach to abstract orchestral music as well. This gives it a particular narrative drive and passion. The deep familiarity each player has with his or her colleagues after so much work together also contributes to the consistency of sound.

Bychkov admits that the Philharmonic is not the most technically flawless or polished orchestra that he has conducted. The musicians make up for that by the quality of their best playing. “When they love the music,” he says, “there are moments which are set on fire. When they are at ease, they play like they’re possessed.” Nor, he says, are they hidebound adherents to a conservative repertoire. When he conducted the Bach B-minor Mass with them, he says, he aimed for a Baroque historically informed style that was new to them. They were fascinated by this. They play a variety of music, including new works. In 2003, for instance, Bychkov conducted the orchestra in the first performances of Cristóbal Halffter’s Adagio in the Form of a Rondo at the Salzburg Festival. This season, the Philharmonic played Esa-Pekka Salonen’s recent Piano Concerto, under the composer’s baton.

Though the music the Philharmonic is bringing us is not new, it’s of a great variety, from Schubert’s classicism, through Schumann’s and Brahms’ conservative Romanticism and Wagner’s and Mahler’s emotional openness, to Bartók’s tough modernism. It should be a great display by a great orchestra.