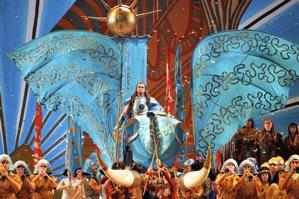 Aida: If Looks Were Everything

As one of the grandest of grand operas, it’s only fitting that Verdi’s Aida would open San Francisco Opera’s fall season. The 140 people assembled on the War Memorial Opera House stage for the Triumphal Scene may not have held a candle to the 2,000 supernumeraries enlisted by Col. Mapleson in Chicago in 1885, but when you add in all the women in the audience who used the opening as an excuse to wear huge pieces of Egyptian-styled jewelry, it was quite the show.

An equal dose of glamour came from Zandra Rhodes' fantastically colorful production. Gold for days, patterns upon patterns (based upon authentic Egyptian designs), and costumes that more than a few singers undoubtedly wished they could take home forever. Even if the painted columns in the second act bore too close a resemblance to oversized PEZ containers, the fabulous pastel blue and gold elephant drew deserved cheers from the sellout crowd.

In its illustrious history, San Francisco Opera has chosen Aida as the vehicle for the U.S. debuts of Renata Tebaldi and Mario del Monaco (1950), first Aida of Leontyne Price (1957), and first Radames of Luciano Pavarotti (1981), and now, Marcello Giordani. Whether history will deem his debut as auspicious as the others remains to be seen.

Giordani’s trial-by-fire came early on, in “Celeste Aida.” Though he had no trouble ascending above the staff, phrases were clipped, with overemphasis replacing legato. As the opera developed, however, Giordani’s sterling tone came to the fore. In the final tomb scene, a modicum of elegance finally emerged, with relatively seamless phrasing and a much overdue mezza voce (half voice) conveying the ironic joy of being buried alive with Aida at his side.

How many opera lovers will ask to be buried with the recordings of Giordani’s Aida, Micaela Carosi, is questionable. In her San Francisco Opera debut, the soprano showed that her track record as Aida at the Met, Covent Garden, Arena di Verona, and major houses in Barcelona, Turin, and Dresden owes mostly to power and fortitude above the stave. In vain did one search for beauty in Carosi’s voice that lasted beyond a note or two. The most awkward moment came at the end of Aida’s great first act aria, “Ritorna vincitor,” when the audience waited so long deciding whether or not to applaud that Music Director Nicola Luisotti drowned out the scattered shards by commanding the orchestra to resume playing. I felt for Carosi, who moved on like a trouper, as if nothing out of the ordinary had occurred. Which, alas, was certainly true of her singing.

Casting Carosi is yet more proof that Verdi sopranos are as hard to come by as economic recovery. Gazing at a list of sopranos who have undertaken Aida in San Francisco — that begins with Muzio and Rethberg and extends through Tebaldi, both Leontyne and Margaret Price, and Rysanek — it’s clear that the last time San Francisco heard a truly great soprano in the role was 1984. Big Brother has other priorities.

Saving the day was the remarkable dramatic mezzo, Dolora Zajick. Having long graduated from the role of the offstage priestess, which she undertook here in 1984, the 58-year-old Merola graduate sang with the power, beauty, and freshness of youth. Not much of an actress, she’s ideal for a role that puts the voice first. Her astounding solo in Act 3 deserved even more bravas than it received.

As Amonasro, the tightly wound, hulking baritone Marco Vratogna made clear that his triumphant 2009 SFO role debut as Iago in Otello was not a fluke. Dressed as a wild man, and moving as such, he emitted gorgeous, orchestra-defying sounds. He also overstressed every second or third word of virtually every phrase he sang or, upon occasion, spit out. It was a bit much.

In smaller roles, American bass-baritone Christian Van Horn made a fine debut in an unmemorable role, the King of Egypt. Bass Hao Jiang Tian, who excelled in The Bonesetter’s Daughter two years ago, sounded surprisingly woolly. Adler Fellows David Lomelí and Leah Crocetto gave their considerable all to their bit parts as messenger and offstage priestess, and Chiharu Shibata and Damon Mahoney danced fabulously. The choreography by Jonathan Lunn and Lawrence Pech, strong on gymnastic athletics, included four delightful young dancers who were as charming as they were talented. I don’t know if it was they or debut director Jo Davies, though, who chose to bore us by having so many choristers march around like automatons.

From Row P in the orchestra, Luisotti’s strings shimmered like silk in the opening, then assumed a supportive role beneath the singers. Everything seemed exactly right, including the solos, yet nothing stood out the way it has on prior occasions. This was all to the good. Had the supercharged music director not played the diplomat, and instead repeated the breathtaking tour de force of his Salome, Fanciulla, or Forza del destino, the shortcomings of our Aida and Radames would have been even more glaringly apparent.