At first glance, the pairing of The Roots — the popular, progressive hip-hop band whose main gig these days is as the house band of The Tonight Show Starring Jimmy Fallon — with the “traditional” Christian McBride Big Band at Hollywood Bowl Aug. 28 looked like an odd couple for the ages. But in the words of a pair of brothers from another time, it ain’t necessarily so.

For one thing, both McBride and The Roots are from Philadelphia; indeed, McBride and the band’s founders, Questlove and Black Thought, were classmates at the Philadelphia High School for Creative and Performing Arts (“It’s a 30-year reunion for us,” McBride said). So, it was an all-Philly night, with the Bowl filled almost to bursting with jazz and hip-hop fans, many of whom were loyal partisans from back East.

On another level, the two groups were not confined to each other’s genre and language. The McBride big band opened the show with a soul/funk jam as Cedric the Entertainer did the hard-sell introductions as if this were an R&B revue. Gradually, with the late Roy Hargrove’s “Roy Allen” and McBride’s “The Shade of the Cedar Tree” (a tribute to Cedar Walton), the band slipped into a conventional, if solid-sounding, mainstream big band direction, with McBride’s always-commanding double bass providing the outsized pulse and tenor sax man Ron Blake getting a lot of relaxed solo space.

Then after guest vocalist José James’s robust baritone swung through Jon Hendricks’s vocalese lyrics to “Moanin’,” McBride strapped on an electric bass and the set began to veer toward early ’80s soul, culminating in James’s vocal on Bill Withers’s “Just the Two of Us” (part of his Withers tribute act). We were moving forward in time, setting the stage for a leap ahead into the next decade when hip-hop was beginning to dominate the popular music business.

It’s a fashionable thing nowadays in pop for superstars (or their copycats) to devote entire concerts and tours to playing just one of their albums from start to finish — usually during a round-numbered anniversary year. So The Roots set out to perform their breakthrough album, Things Fall Apart, upon its 20th anniversary — which they did more or less with a bit of swapping of the order and side trips.

The Roots are almost a big band themselves — with three keyboardists manning an armada of Yamahas, Korgs, and Nords, plus flute/sax and trumpet players, electric guitar, some swinging five-string electric bass work, two percussionists on drum machines, and a sousaphone player lending a slight New Orleans street band flavor to the sound. The 32-year-long rapport between Black Thought (aka Tariq Trotter) and Questlove (aka Ahmir Thompson) was obvious, with Black Thought’s rapping bouncing rhythmically off Questlove’s propulsive drums, tirelessly urging each other on in a tightly-constructed set that charged nonstop for 85 minutes. On two numbers, another rapper, Dice, dug in with verbal counterpoint. 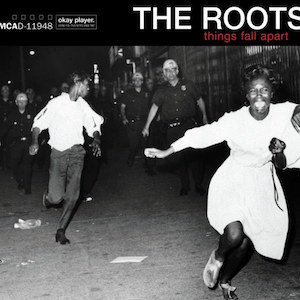 On the CD of Things Fall Apart, the whole thing unfolds in a ceaseless flow with a lot of intricate mixing, samples and infiltrations of jazz and soul best experienced through a pair of good headphones. At the Bowl, though, a lot of the subtleties were lost through the blasting amplification (operated by a different team than the house crew that handled the McBride set) and the distractions of dazzling lighting effects. And Black Thought’s rapid-fire stream of words were mostly unintelligible to me.

Finally, during the reggae-tinged “You Got Me,” Black Thought and Questlove turned the set over to their guitarist “Captain Kirk” Douglas, who sang and turned in a tour de force on the instrument, quoting “My Favorite Things” en route to a Jimi Hendrix-like guitar-hero finale. And that was that — a surprising, off-topic close to the set and concert.

Prodding Tradition With a Hip-Hop Stick

JooWan Kim is perfecting his own brand of classical/hip-hop hybrid.

Federico Mompou and His Sounds of Silence