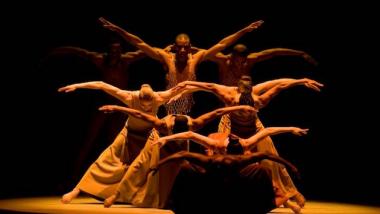 Every time you turn around, if you’re that kind of dance writer, there’s another anniversary to celebrate. But this one merits special attention. In 1968, the Alvin Ailey company, celebrating the African American experience as a “Negro” dance company, according to the newspapers of the day, began its association with Cal Performances at UC Berkeley. Today the Alvin Ailey American Dance Theater and the university showcase artistry, dance education, and community outreach, like the tuition-free AileyCamp each summer for Oakland and Berkeley’s at-risk youth.

Fifty years is longer than its artistic director Robert Battle has been alive, he pointed out at Tuesday’s opening in a precurtain speech. The program began with the welcome return of an all-but-forgotten 1982 Talley Beatty ballet, The Stack-up, moved on to company dancer Jamar Roberts’s stunning new Members Don’t Get Weary, which strikes the tones of somberness, faith, and hope existing in the company’s finest pieces, and ending with Ailey’s Revelations, the classic that practically set the criteria for those qualities.

Celebration was the watchword; the audience cheered and occasionally whooped, from the opener — the 1982 Stack-up, with its abstract yet urban backdrop by artist Romare Bearden sharing pride of place with nonstop rhythm and blues dances of the era, a glittering disco ball, and multicolored, satiny, vintage garb — right down to the Revelations classic clap-along finale, “Rock-a My Soul in the Bosom of Abraham.”

Between those gorgeous bookends, Members Don’t Get Weary, set to two John Coltrane pieces, “Dear Lord” and “Olé,” offered a tantalizing look at an eloquent rising choreographer, Jamar Roberts, a standout Ailey dancer since 2002. In this, his first work for the company, which premiered during its 2017 New York home season, Roberts has gathered 10 dancers, garbed them in shades of denim blue (and a touch of burgundy), shaded their faces with broad-brimmed straw hats, and set them out in a field, where you sense, from the confined quality of their moves, that the only thing as relentless as the sun is the unseen boss man.

Their spines are bent forward, in one case resembling that Diego Rivera painting of a man with a huge basket on his back. Their arms are at angles. Brandon Stirling Baker’s lighting and scenic design confines the dancers in a dim capsule of light, surrounded by darkness and a slitted backcloth through which the dancers’ gesturing hands reach, like prisoners. The music is bluesy, the dancers sorrowing and yet persevering, moving more generously in their confining quarters than in their labors, and taking solace with each other, or, in the case of a couple, with mournful embraces. Roberts quotes author Ralph Ellison: “As a form, the blues is an autobiographical chronicle of a personal catastrophe expressed lyrically.” Roberts acutely expands on that sentiment. Standouts included dancers Jacqueline Green, Renaldo Maurice, Michael Jackson Jr., and Chalvar Monteiro.

In Stack-Up, carefree vivacity and sunny energy set to a collage of pop and jazz recordings, the stage lights up like its own glitter ball with split jumps, spins, lifts, and sheer boogie — of the bopping-in-your-seat variety. But that is darkly counterbalanced by villainy. Jamar Roberts, as the nasty romantic rival, attacks sweetheart Yannick Noah in mid-party, shoots him up with heroin, and leaves him manically itching, jumping, and then collapsing, over and over, and finally dying of the overdose, leaving his girlfriend (the willowy, graceful Constance Stamatiou) in despair and their friends lifting the victim’s body like pallbearers. It’s not easy to watch, but it’s of a piece with each dance on the bill, where sorrow, joy, and resistance are the catalyst for reliably painful, noble, persevering partnerships, rooted deeply in love. That love can be self-sustaining, it appears. Thanks to the company he launched, Ailey’s 1960 Revelations becomes brighter, its brilliance more memorable, every year.

ODC and choreographer Brenda Way jump into the #MeToo moment with a deeply felt and powerful dance.

Wang Ramirez Dances for Their Lives

Monchichi packs a lifetime of courtship rituals into a breathtaking hour.