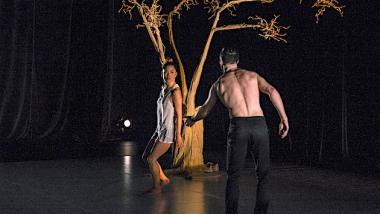 Wang Ramirez Dances for Their Lives

Wang Ramirez isn’t a name you’d remember off the bat, but then maybe you’ve never heard of Stiller and Meara. That was Jerry Stiller and Anne Meara (yes, Ben Stiller’s mom and dad), who built an entire standup comedy career on their cultural differences (Stiller a Jew, Meara a Catholic). But their love for each other, their couple-ness, if you will, was what made their routines work. Although with Wang Ramirez, also partners on stage and in life — they’re based in Perpignan, France — we’re talking dance and not comedy, the key thing remains the same. Whether they’re physically arguing — she, Honji Wang, pulling away from him, Sebastien Ramirez; he, born in France to parents from Spain; she, born in Frankfurt to Korean parents who never learned German. But since she looks Asian, she is complimented for her German fluency by a neighbor in the strange apartment block she lives in, who declares that Honshi isn’t a good name for her, and he’ll call her Monchichi. Eventually, that became the title of Wang Ramirez’s current show, which played Wednesday night at Stanford University’s intimate Bing Studio. (Disclosure: I occasionally freelance as a copywriter for Stanford Live.)

In any event, Wang and Ramirez’s dance is not only entertainingly cross-cultural, its performance and choreography are stunning, packing into one hour numerous apercus that you wouldn’t have picked up on as quickly were the artists standup comedians. As a duo, they are keenly observant and funny, and not afraid to share their less-funny insecurities with their audience. There’s even a brief shared monologue when they talk about their upbringings and their cross-cultural lives, switching languages and entertainingly overlapping their lines, as if there’s some magic bond, which there likely is, in what they disclose. We see how alike they —  and we —  can be.

The action takes place on a bare performance space, adorned with only a large leafless (or maybe dead) tree, designed by Ina Ravn, veined in green, beautifully lit by designer Cyril Mulon. Wang and Ramirez change their clothes a few times, refreshing the setting and making themselves new for each other, and go through a wonderful bit where, on the darkened stage, they flirt, throwing each other red love lights, as I think of them, from the tree in courtship. The duo is responsible for the entire piece; the music is assorted, electronic, popular, dance, and generally less than obtrusive, which works out fine.

The choreography is a blend that tastes like contemporary dance, the dance of a couple talking to each other about their days, their clothes, their lives, their symbols, their love for each other, their need to remain united yet individual. The language is hip-hop, breaking and some good old contemporary-dance moves, like the sinuous interplay of rippling hands and arms that showcase their interdependence, and also how beautifully equipped they are for an hour of dancing. Their understatedly average physiques prove to be perfectly suited to movement of many genres and tempos, every muscle in place (most of the time — anybody will feel a frisson of compassion when Ramirez doubles over and says in French, “Aargh, my back!” and Wang helpfully pummels it for him), arms beautifully elongated, no bellies, muscularly lithe, heads held high on perfect necks. Which makes it pretty funny when, as Wang lies on the floor, Ramirez suddenly runs at her, throwing his feet around her neck and bumping her head. She reacts not really at all, just gets up and goes on moving as the rest of us are gasping. The lesson, maybe: Who can say what anyone else’s relationship is like? When they’re not busily repelling each other or declaring their physical independence, we see them in gorgeous united movement that makes the security of their mutual love as loud as if they yelled about it. Like the best comedy or the best tragedy, great dance cannot lie.

Abundant lesson-maybes go on here, and as the piece draws to an end and the stage space goes black, one senses that their conversations, conflicts, and reconciliations will go on and on. We’d be lucky to remain flies on their wall.

The Heart of “Hearts and Arrows”

It’s a dance! It’s a lifestyle! It’s a whipped topping! Benjamin Millepied’s L.A. Dance Project seems to be about more than the movement implies.