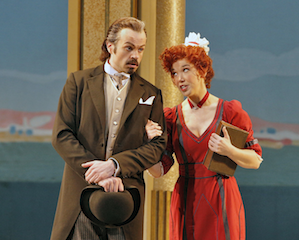 And a Good Così Was Had by Tutte

If there’s a single operative term to describe San Francisco Opera’s Così fan tutte, which opened Sunday afternoon in the War Memorial Opera House, it’s “lovely.” In John Cox’s pastel-perfect production, designed by Robert Perdziola and unveiled in Monte Carlo and San Francisco in 2004, even the undeniable destruction of WWI cannot detract from the beauty of Mozart’s music, and the wittiness of Da Ponte’s libretto.

The only weakness to this production, and a minor cavil it is, is that details of characterization are sometimes submerged in long stretches of ultra-smooth, honeyed ensemble. But those who stick with it are in for so many delights, from both the stage and pit, that dwelling on the performance’s weaknesses would be like drilling a hole in the bottom of a full glass so as to claim that it’s half empty.

There really is no weak link in the cast of six, nor in the Nicola Luisotti’s conducting, the San Francisco Opera Orchestra’s playing, or Jose Maria Condemi’s open-eyed, vibrant directing. Discussed in order of appearance, first onstage is Don Alfonso, here depicted as a croupier in a Mediterranean resort on the eve of WWI, performed by bass Marco Vinco, who sings and acts with strength, grace, and wit. Far more devilish than the Devil, his vibrant portrayal is a joy from start to finish.

As Ferrando, one of the hapless lovers, tenor Francesco Demuro sings beautifully. He may not be a supremely physical actor, nor possess all the honeyed tone of a great Ferrando, but when he sang “Un’aura amorosa” (An amorous breath) looking straight ahead, and began the recapitulation by moving forward and singing softly, as if sharing the deepest intimacies, it took a very hard heart not to soften.

The richness at the center of bass-baritone Philippe Sly’s voice, combined with his handsome, youthful physicality, seem tailor-made for Guglielmo. At present, the shallowness of his lowest notes, the push with which he voices his highest, and a paucity of softly seductive singing suggest room for growth; then again, to sing with so much beauty, and such ease onstage, are major accomplishments for someone 24-years of age. Bravo.

As Fiordiligi, soprano Ellie Dehn gave her finest performance since her SFO debut in 2010. The extreme smoothness of her beautiful voice, which betrayed no hard edge, seemed ideal for such a pastel production, and her tall, graceful bearing and extraordinary neck were a joy to gaze upon. If there was a weakness to Dehn’s performance, other than the lack of strong, solid low notes in “Come scoglio” and a marginally too slow cabaletta in “Per pieta” (Have pity), it was that her dignity did not allow for the range of emotional nuance that another natural Mozartian, Elisabeth Schwarzkopf, must have brought to the role when she sang it here four times between 1956 and 1963.

Then again, that it feels fair to compare Dehn to Schwarzkopf attests to the accomplishment of the young artist’s singing. On record, only Schwarzkopf in 1954, conducted by von Karajan, produced such perfectly smooth, sublime singing as did Dehn in the heavenly Act 1 trio, “Soave si il vento” (May the wind be gentle). (I would be remiss not to mention that Luisotti’s conducting in the trio, and his decision to have Vinco sing with supreme softness, were also ideal.) And Schwarzkopf, in an era before period performance practice, never attempted the beguiling variations and embellishments that Dehn brings to the role.

Making her U.S. operatic debut, mezzo-soprano Christel Lötzsch looked fabulous in both full dress and undergarments, but occasionally betrayed some shrillness higher in her range. To her credit, she blended wonderfully with Dehn, sounded fine when singing softly, and moved with such easy that her less than ideal tone detracted little.

Replacing soprano Heidi Stober, former Adler Fellow soprano Susannah Biller, who stars in the world premiere of Dolores Claiborne next season, was a physically ideal Despina. Vocally, she sounded a bit thin and tonally undernourished; her instrument shines most at the top of her very high range, where this role rarely ventures. But again, she brought such joy to the production that Mozart and da Ponte were very well served.

In his program note, Luisotti points out that Resident Conductor Giuseppe Finzi accompanies the recitatives of 18th-century style characters Despina and Don Alfonso on harpsichord, while he supports the more forward looking Guglielmo and Ferrando on the 19th-century fortepiano. As for Fiordiligi and Dorabella, whose “florid and ornamented” music Luisotti identifies as baroque, they earn Michael Leopold’s theorbo and baroque guitar. You may not notice any of this, especially the switch from harpsichord to fortepiano. But such attention to musical characterization, which can also be heard in Luisotti’s sparkling, witty improvisations and apt tempos, provides the foundation upon which the production soars.

Perdziola’s dresses for Fiordiligi and Dorabella, inspired by the costumes of the Ballets Russes as well as designer Paul Poiret and other WWI-era illustrators, are to die for. Ian Robertson’s Opera Chorus is superb, and our wonderful orchestra, here performing in the raised pit that Luisotti prefers for Mozart, could only be better if everyone played period instruments. In short, this is an extremely fine Così whose light and love continue to shine long after the curtain has closed.