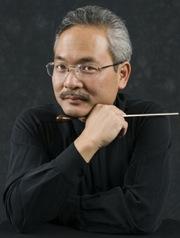 And Now For Something Completely Different ...

David Bratman on November 23, 2009
Tired of the usual run of jolly Christmas choral music? A nearly full house on Friday in Stanford’s spacious Memorial Church welcomed in their holiday season with a Requiem. And not just any Requiem. What the Stanford Symphonic Chorus and Peninsula Symphony Orchestra had gathered to perform under the baton of Stephen M. Sano, the Chorus’ director, was a new performing edition of the Missa pro defunctis by Antonín (alias Anton, alias Antoine) Reicha.

Born in 1770 (the same year as Beethoven) in Prague, Reicha drifted to Vienna, like so many Czech musicians of the time, and then eventually ended up in Paris, where he died in 1836. (Thus his variable forenames.) Known today mostly for pleasant but innocuous wind chamber music, Reicha at his best was a daring, imaginative composer in a time when music was bursting its bounds. That he learned from Joseph Haydn and taught Charles Gounod will give you an idea of both the geography and the generations that he spanned.

Reicha probably wrote the Requiem during his Vienna years. The singers used the German pronunciation of the Latin text in acknowledgment of this. It’s a large work, lasting an hour, and while it may seem sprawling by the end, the individual movements are fairly concise. The only moments at all operatic are the trills in the Benedictus, a soprano aria sung by Christine Abraham in a light, melting voice against coy wind parts. Although it has the most elaborate vocal part in the Requiem, if placed in a Mozartean opera, to which it is most akin, it would come across as a simple song next to virtuoso arias.

The only other solo aria is the Tuba mirum, for tenor, in the nicely rounded voice of Chester Pidduck. The text actually mentions the trumpet, but rather than dramatic solos for that instrument, Reicha offers solemn brass chorale fanfares. The balance of voice and instruments in this movement works excellently, letting the voice come through clearly. Some other movements have parts for vocal quartet (mezzo-soprano Wendy Hillhouse and baritone Jeffrey Fields joined Abraham and Pidduck in these) that don’t show the voices off to their best advantage.

Chorus to the Fore

This Requiem belongs mostly to the chorus. The Stanford Symphonic Chorus is a sizable group of almost 200 singers. Over two thirds of them are women, which didn’t prevent the men from making a good account of themselves, as well. A few of the choristers hid behind their sheet music, yet as a whole they sang out lustily and overall kept a firm line. Reicha writes better for the chorus than he does for the solo quartet, because the chorus is larger: He has a large orchestra and is not afraid to use it. At the beginnings of movements, he sometimes offers dramatic orchestral gestures into which the chorus drops words staccato. For the most part, though, he uses the orchestra for gentle underscoring of the chorus. The trombones, for instance, play frequently, usually just solidly backing up the bass parts. There’s little of the grand starkness of the Berlioz Requiem. The musical vocabulary is more akin to that of a Haydn oratorio. On the one hand, Reicha doesn’t display Haydn’s sustained genius; on the other hand, he’s more restrained, without the dramatic intensity that can be wearying at length in some of Haydn’s and Mozart’s larger works.

Sometimes, though, he can be surprisingly advanced for his time. The slowly building, luminous orchestration of the Lux aeterna resembles nothing so much as Wagner’s Rhinemaidens emerging from the river. At other times, he can sound almost Baroque, with the ornamented string lines running underneath the chorus in the Hostias.

Where Reicha really cuts loose is in his fugues. He loves fugues. Six of the 13 movements of the Requiem end with a fugue. The last movement ends with two of them. It can be hard to keep up with the composer here. In a few places in the middle of fugues it sometimes sounded as if the chorus had let the musical thread go slack, though they caught it up again soon enough. The orchestral underpinning sometimes disappears as Reicha uses the orchestra to create more fugal parts. He has a liking for employing his trombones to introduce counterthemes.

For a brief sequel after intermission, the Peninsula Symphony’s music director, Mitchell Sardou Klein, took the podium to lead a more conventional Christmas season work, selections forming about half of Part I of Bach’s Christmas Oratorio, together with the bass aria, “Erleucht auch meine finstre Sinnen,” from Part V. This aria offered Fields a chance to be heard to much better effect than in what little solo music Reicha had offered him. Unfortunately for him, if not for the audience, his fine singing was overshadowed by a tirelessly virtuoso rendition of the oboe d’amore accompaniment, played by Dane Carlson. Hillhouse had a good solo turn of her own, in the recitative/aria “Nun wird mein liebster Bräutigam/Bereite dich, Zion.” She sang these wedding-metaphor verses with cheerful good humor. Three chorales gave the chorus a chance to sing against a more assertive, grander orchestration than Reicha’s. And we all went out gently into the cool evening of the Stanford quad.