There is something to be said for working extensively in electronic or electro-acoustic music before confronting a symphony orchestra with your compositions for the first time. It gives you low-cost access to a nearly unlimited supply of sound colors, and you begin to have an idea of what is possible and what is transferrable.

It certainly seems to be working for Britain’s Anna Clyne, now 40, who, following the release of her enticing new cello concerto DANCE (reviewed in SFCV in June) has issued a compendium of her colorful, ravishingly-orchestrated tone poems from the last decade (Avie). The whole package is called Mythologies, consisting of five pieces recorded with the BBC Symphony Orchestra under four different conductors and broadcast by the BBC from 2011 to 2018. 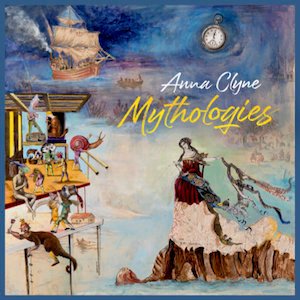 The leadoff piece, Masquerade, is an attractive curtain-raiser that sounds custom tailored to the Last Night of the Proms for which it was commissioned, in 2013. Marin Alsop leads an orchestra that swirls vigorously and seductively in continuous scales and glissandos before suddenly breaking out into suggestions of English folk songs (Clyne knew her audience).

This Midnight Hour, with Sakari Oramo on the podium, alternates between morbid visions suggested by by Juan Ramón Jiménez’s poem about a demented woman running naked through the streets and an evening poem by Charles Baudelaire. The music often scampers about, as the woman might, finally giving way to a darkly lyrical, subdued folk melody for the last three minutes or so, punctuated at the close by a single, loud, startling timpanum stroke. The sweep of the melodic line sometimes reminds me of gestures used in certain films and miniseries.

A mournful, folk-based Irish fiddle tune in the lowest range of the violin launches The Seamstress, with Oramo again wielding the baton and Jennifer Koh as the star soloist in a de facto violin concerto. Irene Buckley’s whispers and sighs emanating from a laptop equipped with Pro Tools music software accompany the instruments in spots; she is supposed to be quoting William Butler Yeats’s poem “A Coat,” but the Irish-accented words aren’t intelligible until the last third of the piece. When not immersed in the fiddle tune, Koh gets plenty of opportunities to flaunt some technical razzle-dazzle.

Andrew Litton takes command in Night Ferry as drum strokes, muted brass, and swirling strings and winds suggest a storm at sea (as a metaphor for manic depressive states, Clyne’s starting point for the piece), while raindrops from harp and strings offer some calm in between the eruptions. A piccolo keeps re-quoting a theme that sounds like a paraphrase of one that runs through the first movement of Shostakovich’s Seventh Symphony. Eventually the low, dark brasses guide the ferry gently into port, by which time this listener is deliciously wrung out from this scintillating addition to the gallery of storm-at-sea sound pictures by Mendelssohn, Wagner, Sibelius, Britten, et al.

Finally comes the earliest (2011) piece, <<rewind<< – yes, the title contains the universal accent marks found on every CD and tape player – as André de Ridder leads a tension-filled rush of thrumming tremolos interrupted now and then by “snags” in the tape. I take it as a reminder to “rewind” the disc and play it again – which I would do gladly.

Violinist Benjamin Beilman wows with a powerful rendition of a Jennifer Higdon concerto.