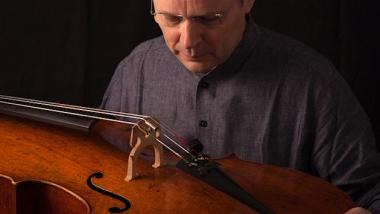 Cellist Anssi Karttunen and pianist Nicolas Hodges, frequent recital partners, came to Berkeley’s Hertz Hall on Sunday, October 29, for a concert featuring the kind of music they like best: extremely new compositions written for themselves to play. There were three of these, all first U.S. performances, and all proving that the spirit of 20th-century modernist composition is alive and active.

The centerpiece of the program, in placement and length as well as heft, was Slackline by the French composer Pascal Dusapin. It’s in four movements and lasted about 25 minutes. It’s more contemplative than the compulsively driving music for which Dusapin became known, and more severely modernist, but it did not lack activity nor interest. A movement titled “Peaceful” featured slow-moving and continuous, mostly chordal, declamatory lines for cello over chromatic tinkling in the piano. Another, “Calm (and relieved),” approached the same spirit through harmonics and deep throbbing pizzicato. These movements were separated by “Feverish … impatient,” sounding at times like the same thing sped up about tenfold. It was fast, jagged, and irregular, but it was still meditative in spirit. Lastly, the instruction “Exuberant (but not extravagant)” translated to nervous rumbling. I found value in this strong and shifting music.

The other two new works were briefer. Ashkan Behzadi is an Iranian composer now living in the U.S. His Fling is seven minutes of Webernian pointillism. Assorted and varied cries, sobs, pops, knocks, warbles, and long slow glissandi for the cello, over accompaniment that drifted to the far ends of the keyboard, were fun to listen to but didn’t seem to add up to anything or go anywhere.

The Duo by Fred Lerdahl, a senior American composer who’s Behzadi’s composition professor at Columbia, came between the other two in nature as it did in length. It featured active, chromatic cello lines of varied character. Some double stops were low and rich like Dusapin’s, others bright and tangy. Fast passages brought Karttunen’s closest approach to traditional, intense cello tone. The piano part, irregular and disconnected from the cello, tinkled like Dusapin’s and ran out to extremes of high and low like Behzadi’s. Some of the chords had distinctly Debussyan harmonies.

These three works were interleaved with two of the most dignified classics in the cello and piano repertoire, Beethoven’s Sonata No. 5 in D, Op. 102, No. 2, and Brahms’ Sonata No. 2 in F, Op. 99, both reflective works from dates approaching their composers’ later years. The performers brought the same spirit to these pieces as they did to their new music.

Karttunen played these classics with bent notes and a rough and varied texture, especially in the Beethoven. To Brahms he brought a basso profundo tone, even on high notes. These features were akin to styles he used elsewhere in the program. So was his fondness for dramatic left-hand gestures when playing on open strings. To Beethoven’s Adagio he gave a stringiness typical of Baroque music, and with an equivalently light emotional level, contemplative as in the Dusapin but without the full passion and sobbing pauses sometimes heard in this movement.

Hodges gave Beethoven and Brahms the same hard-punching, heavily chordal performance that he did elsewhere whenever the opportunity arose. His clear playing felt subsidiary to the cello throughout, but it held the platform steady.

There was one horrifying interruption to this concert. In the middle of Dusapin’s “Feverish” movement, the players abruptly stopped to let a ringing cell phone get out of the sonic right of way. That’s particularly regrettable from a small audience whose members really wanted to be at this concert of austere music. But the fact that the mood resumed afterwards without rupture confirmed that the event was more of an intellectual than an emotional experience.