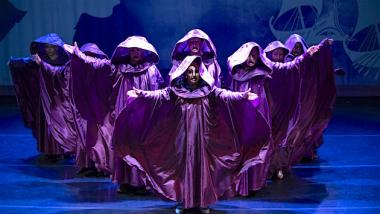 The intrepid opera company Ars Minerva has established itself in the Bay Area by offering the rarest of the rare, Baroque operas never performed since their premieres. This year’s offering, Giovanni Porta’s 1738 Ifigenia in Aulide, the company’s first 18th-century work, maintains the strong musical and dramatic values that marked their previous productions.

The libretto tells a familiar story, with a twist: the Greek army, on its way to make war on Troy, is stranded on the island of Aulide by a lack of wind. The prophet Calchas tells King Agamennone that he must sacrifice his daughter Ifigenia to appease the goddess Artemis. After some internal struggle, Agamennone agrees. Predicable complications arise, including resistance by Achille, Ifigenia’s fiancé, and Clitennestra, her mother.

Ifigenia herself is honored to be sacrificed for the good of her nation. Her death is where this story usually ends, but not in Apostolo Zeno’s libretto: At the sacrificial altar we learn that Elisena, a slave in love with Achille, is in reality the daughter of Helen of Troy, and also named Ifigenia. She is moved to commit suicide, and, an acceptable sacrifice, her demise leaves Agamennone’s daughter alive.

Ifigenia in Aulide opens with an overture that sounds rather like Vivaldi’s concertos, containing melodies with strong rhythmic profiles and lots of scalar movement, predictable phrase repetitions, and familiar harmonic modulations. Once past the overture, though, Porta’s music takes on a stronger and more personal profile, even within the A-B-A aria structure of opera seria. The opera features a multitude of rage arias for Ifigenia, Achille, Clitennestra, and Elisena. There’s a magnificent third-act trio in which Agamennone, Clitennestra, and Ifigenia express their respective grief, anger, and obedience. A beautiful moral-of-the-story sextet closes the opera.

Ars Minerva billed Ifigenia as semi-staged, but given the dramatic richness and imagination the creative team brought to the production, it had the complexity and feel of a fully-staged opera. Céline Ricci who directed the production and sang Achille, ably handled the interactions among the characters. She made outstanding use of the full ensemble of singers, plus a supernumerary, as a sort of visual Greek chorus. Dressed in hooded purple robes and wearing Noh-like masks, the ensemble moved on stage in response to the characters and their situations, sometimes acted as properties, and were sometimes part of the action. Characters appeared and disappeared among the ensemble members. The movements and behavior of the ensemble created mysterious, appropriate, and moving stage pictures.

Ricci also found considerable modern relevance in how she handled some of the dramatic situations. Teurco, in love with, but not loved by, Elisena, becomes a harassing creep who won’t leave her alone. She manages to turn his attentions to her advantage and makes him a dupe as well as a creep. Ulisse is a bullying sadist toward those around him.

Nicole Spencer Carreira’s projections cannily used ancient Greek artworks and visual motifs, all set on fields of pale lavender or purple, to set the mood, amply assisted by Jack Beuttler’s lighting. Matthew Nash’s costumes for the royal family picked up on the purple/lavender motif, adding contrasting draperies for Agamennone, Clitennestra, and Ifigenia. All of the characters’ costumes were uncomplicated but striking. Teaghan Rohan’s makeup designs went beyond enhancing skin tones under theatrical lighting; Ulisse’s blue tunic was matched by blue makeup around his eyes and elsewhere on his face, for example; makeup extended the shape of a helmet on another character’s cheeks.

Ifegenia had all of this, and terrific singing from every one of the performers. Countertenor Matheus Coura was the overbearing and slick Teurco. Cara Gabrielson brought a big, rich, and flexible soprano to Elisena, easily encompassing her character’s jealously, seductiveness, and rage. Céline Ricci’s Achille was heroic in both sound and manner, her dark mezzo an excellent foil to the sweet and tender soprano of Aura Veruni’s Ifigenia. Mezzo Nikola Printz made a tortured, kingly Agamennone, soprano Shawnette Sulker a brilliant, high-flying Clitennestra. Kevin Gino brought a beefy tenor to Ulisse, a role that had fewer vocal fireworks than the rest. Spencer Dodd was a sincere, forceful Arcade, the smallest role in the opera. Supernumerary Jeffrie Givens rounded out the cast.

Derek Tam led the excellent small orchestra, consisting of harpsichord, strings, and theorbo, from the keyboard.