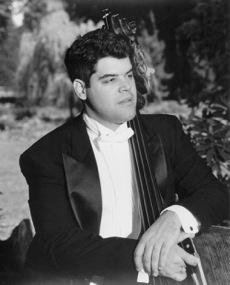 Bass on a Hot Tin Roof

I’m a curious cat, intrigued by unusual things, so I went to a double-bass recital. It’s time for the bashful giant at the back of the string section to come out and take a solo. The big instrument (two of them, actually, though only one at a time, of course) was wielded by Bill Everett, principal bassist for Symphony Silicon Valley, who plumbed its depths at Old Mission San José in Fremont on Saturday, as part of the Music at the Mission chamber music series.

Everett is a fairly big fellow himself, with a mop of dark hair, comfortably dressed, relaxed in his talks to the audience about the pieces we’d be hearing, and effortful without straining in his performance. The Mission’s booming acoustics, ricocheting sound off the stucco walls, grabbed the not-always-carrying tone and brought it out to the audience, full and rich.

The lesson of the evening’s repertoire was that composers who write solo pieces for the double bass are apt to be slightly eccentric. Rossini, for instance — always up for anything witty — took time out from his busy opera career to pen a three-movement Duetto in D Major for the unlikely combination of cello and bass. It was written at the request of a cellist, and that instrument, played here with smooth elegance by Michael Graham, takes most of the leads, Everett’s bass repeating the phrases with graceful lumbering. This performance, more earnest than humorous, was the finest of the 19th-century works on the program.

The concert’s other 19th-century Italian was Giovanni Bottesini, a double-bass virtuoso who wrote daring showpieces for himself. His Capriccio di bravura is a recitative and aria, accompanied by piano (here played by Aileen Chanco), with plenty of rapid display passages. Getting the double bass to jump through all those hoops is the virtuoso challenge. Agility was never Everett’s problem, though landing properly on some of the high notes was considerably more difficult. He managed to be both bold and tuneful.

The least eccentric piece of the evening wasn’t written for the double bass at all. It was an arrangement of Schumann’s Fünf Stücke in Volkston (Five pieces in folk style), Op. 102, originally for cello and piano. (The program listing attributed it to Schubert, instead, one of several unintentionally amusing typos in the program book. The organizers really ought to get these things proofread.) With Chanco as accompanist, Everett navigated Schumann’s characteristic melodies, again with more success at lyricism than intonation. Sputtering attacks in the lively first piece were particularly charming and evoked the more experimental sounds of the other half of the program.

Strange Sounds From the New Land

These remaining three pieces, performed interleaved among their predecessors, were all written in the last 50 years by American composers of an avant-garde bent. They abandoned the Italian plan of trying to make the double bass beautiful, and instead were out to see what were the strangest sounds they could elicit from their implausible soloist.

The gentlest of the three works was a Duo by William Jay Sydeman. The composer, still with us at the age of 82, spoke to the audience before the piece to explain briefly that his publisher had challenged him to write for the most unlikely combination of two instruments possible. He picked double bass and xylophone. Accordingly, percussionist Loren Mach hammered fortissimo exclamations over long held notes and double stops from Everett, who got to indulge himself with some fingerboard snapping to contribute to the percussion department. The two instruments defied expectations by working pretty well together.

Donald Erb’s Four Timbre Pieces, for cello and bass, with Graham as cellist, explored more-rarified sonic realms with two instruments as closely related as possible. Erb’s experiments in string color featured long held notes drifting in and out of harmony with each other, with the musicians occasionally humming to add another timbre subtly to the mix, squeaks and rattlings coming from hitting the strings with chopsticks, descending glissandos in muted harmonics (which Everett compared to the cry of a seagull), and high notes at the tip of the instrument played with full vigor and sounding almost soapy.

None of this held a candle in the sonic boom department next to Digital, for bass, percussion, and electronics, by Franck Bedrossian. Everett began by vigorously sawing his bow against the tailpiece for tumultuous rumblings. Then came dry scraws on the bridge and other peculiar sounds. Mach applied a string bow to the edge of cymbals, for a high, eerie, floating tone matching the bass’ scraws, and hit a drum kit with everything from brushes to a heavy stick, engaging in a dialogue with the electronics (manipulated by sound engineer John MacCallum). Gradually, the sound rose into huge rumblings and thumpings before ending abruptly. Bedrossian’s motto seems to be If you can’t write beautiful music, be as noisy as possible. I felt little of the clever tweaking of other noise-oriented composers like Louis Andriessen or Frederic Rzewski. This was just assault.

So, on Saturday, curiosity didn’t kill this cat, even if it tried. It did leave me impressed with some of the things that catgut can do.