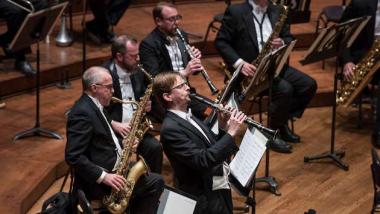 Whether he was writing a Mass, conjuring up a swing band, writing a love duet, or setting a psalm text, his first and forever impulse as a composer was theatrical. His music animated and enlarged whatever the subject or occasion might be. He was lyrical and ironic, bombastic and purringly intimate, pouring nakedly emotional confidences into his listeners’ ears. He rarely feared excess, traveled heavily in dramatic high contrasts, and splashed on orchestral color like a costume designer on an unlimited budget. The curtain was always going up.

It did so most famously on West Side Story, the composer’s landmark 1957 Broadway musical collaboration with Arthur Laurents (book), Stephen Sondheim (lyrics), and Jerome Robbins (direction and choreography). Michael Tilson Thomas and the San Francisco Symphony paid fitting tribute to that show at the end of an all-Bernstein program that got the orchestra’s 2017–18 official, post-gala season underway at Davies Hall on Friday, Sept. 22. The wonderfully fashioned Symphonic Dances from West Side Story, performed with propulsive energy and spacious design, brought this initial Bernstein centennial season bill to an aptly exciting close.

MTT has made a major commitment to celebrating his old friend and musical confrere through the year, with major attractions such as the Age of Anxiety, Symphony No. 2 in November, a concert version of Candide in January, and a screening of the West Side Story film with live orchestral accompaniment in February.

This past weekend’s concerts may have given the audience their fullest and most revealing Bernstein portrait. It opened with a seven-minute work from 1949, Preludes, Fugue, and Riffs, that demonstrated one of Bernstein’s most ingratiating qualities — his ability to light up a hall with the natural showman’s flair for sheer delight. The brasses bolted out of the gates with the insouciant verve and rhythmic thunder of the gangland Jets of West Side fame. By the time a phalanx of saxophones joined the fray, it was clear that Bernstein had planted an infectious melodic earworm that wouldn’t quit.

The action turned louche and burbly, hot blooded and cool, a combination of temperatures that got under clarinetist Carey Bell’s excitable skin. He popped up out of his seat for a wailing, coruscating conversation with the piano, percussion, and anyone else who was game. The trumpets and trombones kicked in with the brass equivalent of scat singing. That little melodic meme kept flaring up and finding new ground and swing-band grooves. It all looked and sounded like night-out-on-the-town fun for the players. Everyone in the place was grinning.

Then, in Bernsteinian fashion, a striking change of scene occurred, with the prayerfully charged Chichester Psalms (1965).  Not that the composer was about to settle in for any Old Testament solemnity. In an opening passage that had some of the primal, percussive drive of Carl Orff’s Carmina Burana, these Psalms made a sit-up-and-take notice entrance. Soon enough, the piece had lofted a boy soprano (the pure-voiced Nicholas Hu) above the fray, in a bluntly beautiful solo.

The San Francisco Symphony Chorus sounded a little buried under the early storms of sound, but rose to the occasion as some of the orchestra textures thinned out. A quartet of adult soloists made some handsome contributions. Bernstein’s lofty, lyrical impulses bordered on the banal at times, but a long-lined string passage and a caressing choral treatment of the third psalm setting led to some reverently plain-spoken harmonies at the piece’s quiet close. The performance grew in stature and clarity as it went.

The least familiar piece of the evening proved to be the most adventurous but ultimately least satisfying. In his late-career Arias and Barcarolles, written for piano and singers and orchestrated (by Bruce Coughlin) after the composer’s 1990 death, Bernstein explored the ripples and wrinkles of romantic love. Opening in an agitated mode, the music traveled an uneasily restless path carved out by a mezzo-soprano (Isabel Leonard) and bass-baritone (Ryan McKinney), both excellent.  On Bernstein’s own texts (with one by his mother, Jennie Bernstein, and another in Yiddish by Yankev-Yitskhok Segal), the songs ranged from ironic ardor (“I love you, It’s easy to say it”) to some convoluted and self-referential conversations (“Don’t you get sick of triads?”) that bogged down in turgid humor and sketchily spare settings.

Much of it came off as second-rate Sondheim, without the musical and verbal wit and bite of Bernstein’s West Side Story lyricist. The piece had its striking effusions, including an orchestral passage of aching, engorged tenderness, the smartly framed Yiddish tune about a wedding, and McKinney’s wandering nostalgia for lost love. But the pleasures were fleeting and intermittent in what often felt like an artificially mechanized portrait of marital connection and malaise.

Everything snapped back into focus in the glorious reading of those West Side Story dances. Tilson Thomas and the orchestra were in exuberant accord, powering from mambo to cha-cha to a sweetly spun “Somewhere.” The percussion section, which had shone all night, was in top form.

At once familiar and brilliantly refreshed, this symphonic makeover of a great musical harkened back to the opening Prelude, Fugue, and Riffs that began the evening. No matter how widely he ranged, Bernstein always sounded like Bernstein, brimming over with combustible feeling unrestrained.

From Ike to MTT, It’s Bernstein’s Arias and Barcarolles

How an Eisenhower malapropism became the title for a song cycle.

MTT and S.F. Symphony Bring Broadway to Van Ness with On the Town