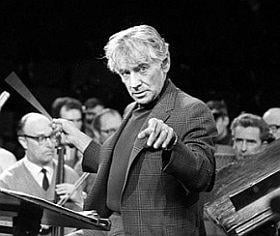 Best and Brightest of Bernstein

David Bratman on November 9, 2009
Nearly 20 years after his death, the name of Leonard Bernstein still carries magic among musicians and audiences, enough to ensure a full house Saturday at Stanford’s Dinkelspiel Auditorium for “A Portrait of Leonard Bernstein.”

This was billed as an evening narrated by Jamie Bernstein, the composer’s daughter. Instead of a slab of reminiscence illustrated with occasional music, however, it was essentially a song recital, punctuated every couple of numbers by her brief, intelligent, explanatory commentary on the music, revealing her to be a lucid educator in her father’s tradition, with only a few anecdotes, none of them personal to her.

She kept herself, rightly, to the side. The real principals of the evening were the singers: Judy Kaye, mezzo-soprano, and William Sharp, baritone, accompanied at the piano by Michael Barrett and David Shimoni, frequently playing four-hands.

As a song recital, the program straddled Leonard Bernstein’s two worlds — classical and musical theater — by dividing into two parts. It opened with his classical work, represented by the song cycle Arias and Barcarolles. After intermission came an anthology of his musical theater songs. Really, though, they’re not that different. There’s classical depth in his theater, and theatrical shine in his classics. As Jamie Bernstein put it, his music is neither high-brow nor low-brow, it’s “all-brow.”

As a whole, the evening felt more like a piano-accompanied tour of the theater stage than a lieder recital. This was reflected in the voices, which were musical theater in style rather than formal classical: no vibrato, low resonance, clear enunciation without sacrificing musicality. Most of Kaye’s career has been in musical shows and operetta, though she has occasionally sung opera. Her voice is slightly on the brassy side, and she seemed more comfortable channeling Betty Comden in On the Town, and especially Rosalind Russell in Wonderful Town, than in the more reflective numbers. Sharp is an early-music specialist who also is at ease in musical drama. His vocal style here matched Kaye’s.

Even Arias and Barcarolles, largely a serious song cycle, was sung in this manner. This work gets its strange title, as Jamie Bernstein explained, from a cryptic remark once made to her father at a White House reception by President Eisenhower, who mysteriously cited these as the types of music he didn’t like because they didn’t have “themes,” by which he evidently meant catchy tunes. Eisenhower would not have liked this cycle that Bernstein wrote years later, for despite beautiful passages and some humor — particularly the self-referential ending of “Love Duet, ” with the singers fretting over how to finish up — it’s full of chromatic through-composed arias, voices tumbling over and interrupting each other in the duets, and jagged dissonance in the accompaniment.

Taking Pleasure in the Acting Out

The vocal parts are of widely varying character, reflecting (as Jamie Bernstein said) the range of the composer’s personality. Much of the pleasure of the cycle came in watching the singers’ characterizations, trying on these different parts, with Sharp beginning to act out the descriptions in the one Yiddish song in the cycle to help convey it to the audience. The singers became more outgoing in the second half, with Kaye belying her dignified appearance and formal pantsuit by amusingly dancing in place when describing the tropical natives in “What a Movie!” from Trouble in Tahiti, and in a couple of the other songs, as well. They stayed restrained when appropriate, however. Perhaps the most moving moment of the entire evening came with Sharp standing utterly still while singing the setting of Walt Whitman’s regret-filled poem “To What You Said” from Bernstein’s cycle Songfest.

Six of Bernstein’s stage works were represented in one way or another in this selection. The emphasis was strongly on On the Town, his first, which got four songs, including the encore. The lively duet “Carried Away” pretty much stole the show. Wonderful Town had two, as did the chamber opera Trouble in Tahiti, whose somber and lonely “Rain Duet” was the piece on the second half closest musically to Arias and Barcarolles. The lost musical 1600 Pennsylvania Avenue (such a commercial disaster that Bernstein withdrew the score) was echoed faintly in the accompaniment of “To What You Said.”

The works of Bernstein more famous today didn’t have to get pushed. Everybody knows West Side Story, so it needed just one song on this program, the classic “Somewhere,” sung as a duet. And Candide, so popular in recent years, showed up only in the form of a seat-of-the-pants, four-hand rendition of the overture, energetically whacked out on the piano by Barrett and Shimoni.

Despite the evening’s lesson that Bernstein’s music is all of a kind, certain ears detected a strong difference between the “classical” opening and the “theatrical” conclusion. As I left the hall after the program, I heard a voice behind me say firmly, “I liked the second half a lot better than the first half.” If the spirit of Leonard Bernstein lives, so, it appears, does the spirit of President Eisenhower.