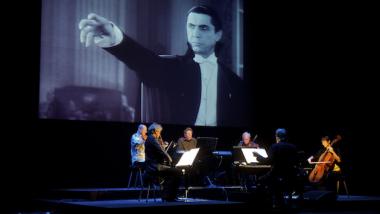 As expected of a classic horror showing on Halloween night, plenty of capes and ghoulish makeup (and a particularly conspicuous sombrero) populated the crowd lining to see Tod Browning’s Dracula (1931). The live performance of Philip Glass’s 1998 soundtrack by the composer himself with the Kronos Quartet made the occasion harder to resist than the hypnotic gaze of the titular count.

The movie, like many horror classics, has not aged particularly well; it’s hard to empathize with the reports of hysteria and panic caused by its premiere, accustomed as we are to gory scenes, cheap jump scares, and the breaking of far more disturbing taboos than those hinted at in this film. Dracula is of a different time; quintessentially romantic in its pacing and symbolism, childish and crude in its special effects, which I’ll forgive, however comical they may be. The menagerie of “horrible” creatures inhabiting Dracula’s Transylvania crypt — an opossum, a pair of armadillos, and a single, lonely bee — is one for the books. The contemporary audience laughed at the campiness of the picture more often than it recoiled in horror. Dracula’s signature lines were anticipated and reveled in with an enthusiasm that threatened to completely neuter any sense of danger in the old vampire. Renfield, the deranged servant, is ironically more disturbing than his undead master.

Due to the technological limitations of the dawn of the “talkie” era, the film did not include any underscoring, and both its dialogues and numerous silent sequences would likely be more unnerving than its choreographed visuals and decadent scenery. Glass’s attempt to rectify the situation has received mixed reviews by both music and movie critics. Its main shortcoming is that it often overwhelms both action and dialogue, ultimately distracting the viewer from the film. Though it may have been a fault of the sound design in this particular performance, as the original spoken dialogue is already not pristine in quality, and therefore easy to overpower, the motoric nature of the writing does not exactly help; there is hardly a sustained moment in the entire score, let alone an extended silence.

On the flip side, the business and restlessness of the music conjures the horror and compulsions of eternal thirst — as Dracula himself put it, “There are far worse things awaiting man than death” — while also providing a suitable aural counterpart to the stylized, yet lovingly crafted production touches that are embroidered throughout this film. In rhythm, cadence, and affect the music is quintessential Glass. Harmonically, it is not that distant from the kind of music that might have been composed for the movie originally. As the movie progressed, my qualms about the soundtrack’s intrusiveness receded into the background, and eventually I ceased to pay so much attention to it — the mark of a truly successful score, as far as I’m concerned.

From a performance standpoint, except from the aforementioned issues of balance, the evening was immaculate. Glass and Kronos were expertly directed by Mick Rossi on synthesizer, and they performed with the kind of subdued professional coolness I imagine from musicians of old providing live musical accompaniment to silent flicks and early “talkies.” When the Paramount opened in 1931, it employed a professional orchestra for such purposes. While most of those jobs wouldn’t survive the Great Depression as movie producers and theaters embraced new sound technologies, it is still a sensory treat to experience a classic movie with live scoring, and in that regard Dracula, Glass, and Kronos delivered.