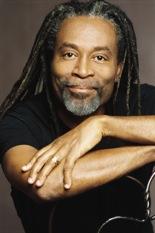 Bobby McFerrin is one of the few certified, international crowd-pleasers alive today. His effect on San Francisco on Saturday night was no exception; the audience at the Nob Hill Masonic Center had to be warned by McFerrin himself, after almost two uninterrupted hours of singing, that the stagehand union reps would come in and start arresting people if folks didn’t start to leave. To be fair, though, McFerrin’s quip was a fitting way to end an evening of spirited, improvised vocal performance that included all members present, not to mention two steadfast and resolved audience members who volunteered for McFerrin’s open call for a duet. There were also, as might be expected from such an ebullient performer, countless unsuspecting victims of impromptu collaboration, each of whom seemed shocked that they could actually come up with something on the spot.

McFerrin wasn’t surprised, though. To improvise, he advised in the few final moments before the authorities were supposed to crash in through the doors, is to be present with your musical ideas and have them follow each other fluidly, in constant motion. Based on the way he pivoted between musical genres and vocal technique, between the stage and down the aisles of the hall into the very faces of concertgoers, McFerrin embodies that fluidity, and led the audience into believing that they could be just as fluid themselves.

Yet a substantial part of McFerrin’s infectious charm is his acute sensitivity to the versatility and expressive power of the human voice, which is the impetus behind his latest studio release, VOCAbuLarieS. Saturday’s concert, produced by SFJAZZ, marked the premiere of the album’s material — original compositions that seem to borrow elements from music from around the world, arranged by McFerrin’s longtime collaborator, bassist Roger Treece, for a chorus of more than 30 singers. For the album, Treece essentially isolated and expanded on distinct motifs in McFerrin’s vocal improvisations, which he gathered over the course of his relationship with the singer that began as a member of McFerrin’s Voicestra ensemble, founded in 1989. These motifs were then developed into varying, undulating textures that serve as the relatively fixed and stable backdrop basis for McFerrin’s improvisation.

In performance, however, even the backdrop is mutable. McFerrin, along with Treece, who assumed the role of conductor for Saturday’s concert, regularly introduced new motifs to the various segments of the Pacific Mozart Ensemble, the first-rank, Bay Area–based chorus that served as the ripieno (or full ensemble) to McFerrin’s soloistic flights. The textural amalgam was dense and at some points hard to latch onto, due partially to the indistinguishable languages hocketed between the choral voices, though the overall effect was stimulating.

The most engaging moments were those when the audience was invited to join in, which seemed to reinforce not only the vocal texture but also the intrinsic power of collective performance and expression that was on display on stage. McFerrin’s message behind VOCAbuLarieS, apparently a tongue-in-cheek one, seems to be the simple observation that every person is endowed with a voice and, thus, the ability to use that voice for the purposes of personal expression. The next logical observation is that a collection of voices means collective expression, thus magnifying that potential. The final point McFerrin seems to make with VOCAbuLarieS is perhaps the simplest of all: What reason do we have to not sing together more often?

McFerrin’s voice was singular, even in a choral texture, and, when unaccompanied, it nevertheless filled the hall beautifully. Truly a virtuoso, McFerrin has created a sound that is robust and tender, commanding and intimate, electrifying and soulful, and he loves to see what he can do with it. Among the others who also got a kick out of everything McFerrin can actually do was the versatile percussionist Alex Acuña, who injected timbral color and rhythmic texture into most of the compositions on the program and followed McFerrin off the deep end in several rapid-fire exchanges of rhythmic motives, random pitches, and mutually acknowledging smirks.

McFerrin’s technique is so formidable that some members of the Pacific Mozart Ensemble were visibly taken aback by his impressive range, which he punctuated at one point by traversing three octaves in only three notes. In addition to the polyphonic ostinatos of the chorus and Acuña’s menagerie of percussion instruments was a beatboxer who occasionally provided a steady hip-hop, swing, or Latin-jazz beat to the ensemble texture. If you closed your eyes during their dual departure on the staple bebop tune Anthropology, you might have been tricked into thinking there was actually a drum trap-set on stage, but even when you kept your eyes open it was still a bit difficult to believe that there wasn’t a horn there, too.

For McFerrin, though, singing is believing. He proved this halfway through the concert when he got most of the audience to hesitantly (but successfully) sing, in perfect unison, Charles Gounod’s famous Ave Maria, a melody that Gounod superimposed on Bach’s C-Major Prelude from the Well-Tempered Clavier, Book I. Yet what of the keyboard accompaniment, you ask? Bobby McFerrin, that master, sang it, note for note.