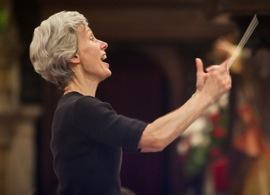 The Mission Chamber Orchestra of San José is the ensemble that asks the musical question: How can you fit enough players to do justice to Beethoven’s Seventh Symphony on the tiny stage at Le Petit Trianon? The answer, revealed on Saturday, is: Very carefully. An orchestra of 35 players can squeeze in, letting the bright acoustics of the auditorium do most of the work of broadcasting the music.

The Mission Chamber Orchestra is, in truth, less technically accomplished than its colleague ensemble on the Le Petit Trianon schedule, the San José Chamber Orchestra. It is, however, far louder and brasher. With no more than six players per string part and a full complement of hooting winds, horns, and trumpets, it filled the hall to the brim with Beethovenian sound. The sonic balance was far over on the wind side, with the bassoons and trumpets being the audible outliers from the distinctively colorful group’s unity of tone. Tempos were fast without diminishing the massive solidity of the work.

Emily Ray, the founder and music director of the orchestra, adjusts for her lack of physical height with a particularly high podium and a clear, precise beat. Rhythmic exactitude is her principal concern, and the musicians responded well in that department. The fast, complex openings of Beethoven’s third and fourth movements came in well-executed attacks and were thrilling to hear. What the orchestra now needs to do is to put some interpretive variety into its rhythmic execution, and to think more about how Beethoven’s repetitions of passages might be made to come across differently the second time around.

Schumann’s Overture, Scherzo, and Finale, Op. 52, formed an interesting pair with the Beethoven. Although the composer’s wife, Clara, and his protégé Brahms considered it one of his symphonies, Schumann himself declined to put that label on a work lacking a slow movement. It was born in the same rush of composition that produced his “Spring” Symphony and the Symphony No. 4, and it’s worthy of the company. It’s been called richer in technique than in invention, which is less a criticism than an acknowledgment that Schumann was writing in the Beethoven tradition, as Beethoven’s genius lies less in his raw material than in what he does with it. The succession of three fast movements fit nicely with the orchestra’s rhythmic strength, though there were some well-turned slow passages, too. Most of all, the bold sound vividly conveyed the essence of Schumann, as the essence of Beethoven was conveyed in his turn.

Between those two old masters came the Concerto for Flute and Chamber Orchestra, by Eric Ewazen, the kind of genial, agreeable, semimodernist contemporary composer who is popular among smaller orchestras. His works have also been played locally by the Redwood Symphony and Oakland Youth Symphony in recent years. This marks another loose resemblance to the San José Chamber Orchestra, which specializes in such composers; of the ones in its most recent concert, Emily Wong is the one whose sound world most resembles Ewazen’s latter-day American nationalist style.

Karen Kevra made a most excellent soloist. Her flute has a low, smooth, solid tone, the more impressive given Ewazen’s tendency to write high-lying solo lines.

Because Ewazen’s concerto, though four movements long, is rather short altogether, Kevra added to the program Gluck’s “Dance of the Blessed Spirits” from Orfeo ed Euridice, for which she played the first flute part. Here too was an elegantly beautiful flute line. Although, unlike the bulk of the Beethoven and Schumann, this is a work in a slow tempo, the classical restraint suited the orchestra well. The strings showed a more secure intonation here than elsewhere in the program, forming a gentle pillow on which to rest the flute sound.