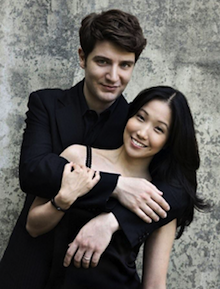 To Brahms and Bax

[email protected]’s first Carte Blanche Concert of the season, Sunday morning at the Stent Family Hall of Menlo School, was a Brahms piano music recital with something extra added. Alessio Bax was the principal performer, playing in all six of the concert’s pieces, for a total of about two and a half hours (plus intermissions, one of them for lunch) over a four-hour period. He had help in two of the works, from violinist Yura Lee and fellow pianist Lucille Chung. And Brahms had assistance in the composing, too, from Béla Bartók and George Enescu.

Brahms’ solo piano works are customarily divided into three periods, and this concert included samples from all three. Early Brahms came in the form of the Four Ballades, Op. 10 (1854). Bax sees the Ballades as a four-movement tone poem of largely unspecified program, and he played them with great lyrical control of the melodic line, bringing it out eloquently despite anything Brahms wished to do to hide it under decorations. Bax is a smoothly controlled pianist, whose style is well-suited for the booming narrow confines of Stent’s ballroom. Even the hammering, Beethovenesque middle sections of the first and second Ballades did not become overwhelming.

From the middle of Brahms’ career, Bax offered the Variations on a Theme by Paganini, Op. 35 (1863), and the Sixteen Waltzes for Four Hands, Op. 39 (1865). The Paganini Variations — yes, it’s the same 24th caprice later used by Rachmaninov, and by several other composers, Brahms’ mentor Robert Schumann among them, as a variation theme — is a compact yet heroically scaled set of 28 of what the composer actually called “studies” (a genre best known by the French name etudes) rather than variations. They’re exercises in technique, so demanding that even Clara Schumann considered the work virtually unplayable. That didn’t stop Bax, who sailed through it heroically without even taking Brahms’ specified break, playing with undiminished energy though it was the last work on the long program. (The tireless man added a Rachmaninov prelude as an encore.)

Lucille Chung at the piano’s treble end joined Bax at the bass end for the Sixteen Waltzes. Judging from this performance, she is a more percussive pianist than he. Together, they made this charming set, very different from the forbidding Paganini Variations, flow lyrically, with many well-judged hesitations and ritards in the tempo. (Some critics when this work was new thought Brahms had been seduced by the spirit of Vienna, where he’d recently moved, though it appears he’d merely been studying the waltzes of Schubert.) A gentle lilt in No. 15, one of Brahms’ most memorable and characteristic tunes, was especially pleasing.

Late Brahms was represented by the Eight Piano Pieces, Op. 76 (1878). These Capriccios and Intermezzos of varying character moved alternately with rolling waves and irresistible rhythmic lurching. Robert Schumann’s contrasting personae of Florestan and Eusebius came to mind, though these pieces are more formally structured than Schumann’s, and heavier than those of Chopin, another composer I was reminded of.

Bax immediately followed Op. 76 with Bartók’s piano reduction of his Dance Suite. This work, though it was played with a rougher style and is much more advanced harmonically than anything by Brahms, succeeded in Bax’s attempt to make it come across as a descendant of Op. 76. It had the same contrasting moods. The more stomping parts carried an echo of the tougher dissonances in Nos. 5 and 8 of the Brahms opus, and Bartók’s particularly dancing third movement bore a striking resemblance to Brahms’ cheerful No. 2.

The Rumanian composer George Enescu was the same age as Bartók, born in 1881, and, also like him, began his career in the shadow of Brahms. It’s harder to hear any sign of it, though, in Enescu’s Violin Sonata No. 3 in A Minor. While the sonata is less advanced harmonically than Bartók, its rhapsodic, accented, drone-filled style, with moods evolving from each other rather than crisply juxtaposed, and with the piano in a distinctly secondary role, is much further from Brahms than any of Bartók’s modernisms. Enescu was specific about the Romanian folk style in which he wanted this work to be performed.

Lee played a dry, heavy violin with limited vibrato, and gave a full complement of whispering ponticello and harmonic effects in the Andante sostenuto e misterioso slow movement. Disaster struck about halfway through the finale when the violin’s bridge slipped out of place. After a few minutes’ struggle with her errant instrument, Lee was able to get it back into shape, and she and Bax restarted the movement with no further trouble.

This concert didn’t quite match in length the famous occasion at Menlo six years ago when Jeffrey Kahane played Bach’s Goldberg Variations and Beethoven’s Diabelli Variations on the same program. It was certainly epic enough, though. It was a tribute to the stamina and creativity of Alessio Bax and his fellow performers, and of Brahms and his fellow composers, too.