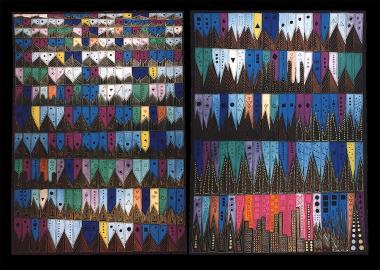 Depending on your point of view, Ravel’s Bolero is either the most irritating piece of music ever written, or the most mesmerizing. Numbingly repetitive, yet unlike anything he, or anyone else, had ever written, it raises the question: What kind of mind could produce such a work?

A new play provides a clear answer: A deteriorating one.

Jake Broder’s UnRavelled, which will have its premiere online on Feb. 25, tells the true story of two notable artists: French composer Maurice Ravel, and Canadian painter Anne Adams. It makes a compelling case that both suffered from the same degenerative neurological disorder — a form of dementia known as primary progressive aphasia, or PPA.

Evidence suggests the composer was in the early stages of that disease when he wrote Bolero in 1928. Sixty-six years later, the same was true of Adams when she painted her signature work, Unravelling Bolero. At the time, she was unaware of her diagnosis, let alone her connection to Ravel.

Broder, an actor, writer, and musician, calls the painting a measure-by-measure recounting of Bolero, in which each rectangular figure represents one bar of music. “It tracks it almost perfectly,” he notes. “It was a gigantic leap in her work,” as well as “an accidental experiment” that provides intriguing insights into the neurology of creativity.

Broder, whose previous biographical play Louis and Keely Live at the Sahara was a long-running hit at several Los Angeles theaters, discovered this story listening to an episode of the public radio program Radiolab. Immediately realizing it was something he wanted to write about, he emailed Dr. Bruce Miller, co-director of the Global Brain Health Institute at the University of California, San Francisco.

“To my surprise and delight, he responded,” Broder recalls. “We struck up a conversation in which I asked a lot of questions, and he gave me a lot of research material. Our conversation progressed, and he invited me to come up and be the Hellman Visiting Artist at UCSF for 2019. The result was this script. “

Broder arranged for an online reading for the institute’s staff members in July. They were sufficiently impressed to finance this larger-scale online production, which features Hollywood actors including Lucy Davenport and Rob Nagle.

“They felt it promoted the questions they were asking, and shared them with a wider audience,” Broder says. “The science is there, but this was designed with a lay audience in mind.”

In that spirit, Miller simplified the science into one sentence: “The disease apparently altered circuits in their brains, changing the connections between the front and back parts, and resulting in a torrent of creativity.”

On first glance, that seems counterintuitive; why would a malfunctioning brain be more creative than a healthy one? Broder has come up with a helpful explanatory metaphor.

“But when language deteriorates a little bit — which happens at the beginning of this disease — it becomes less dominant. There is a golden moment when these things are more in balance.”

Or to use a high-tech analogy, the decline in language processing opened up bandwidth for other modes of expression — musical for him, visual for her — to become more prominent. The result was works by both artists that were unlike anything they had created previously.

Broder concedes we can’t know for certain that Ravel suffered from PPA, but he reports there is plenty of circumstantial evidence. “We have contemporaneous accounts of his behavior, which describe in extraordinary detail the behavior of someone with primary progressive aphasia,” he says. “He would lose words in a particular way.”

Moreover, when the suffering became unbearable, the composer agreed to brain surgery, hoping the doctors would find a tumor they could remove and bring him back to health. “They opened his skull, but found no tumor,” Broder reports. “The surgeon’s report speaks of deterioration in the left frontal lobe — much like what Anne’s scans looked like in the latter stages of her life.”

Broder’s original vision of the work was of a combination theater piece and orchestral concert. “In the before times, when we were able to be with other people, I imagined this to be a play, and the last 15 minutes would be a symphony playing Bolero, with her painting projected behind the musicians so we can all experience what she experienced,” he says.

At this point, he envisions it will ultimately be made into a film. The online production is a hybrid piece — “sort of theater, but sort of film. We filmed it completely remotely. There are incredible limitations to an online production, but we have found ways to play with that — to imaginatively bring you into different worlds.”

“This is a visual story, a story of music, and a dramatic story,” he says. “When there’s a disease that is both a creative giver and a whole-soul taker, how do you function? What happens to your relationships? What does partnership mean, both for you and those who love you?”

Needless to say, Broder listened to Bolero many, many times during the course of the project, to the point where “I now know it backwards and forward.” His relationship to the music evolved over time.

“It was incredibly frustrating,” he recalls, “and then I got to the point where it was hypnotic. I think I’ve gone through to the other side.”

UnRavelled premieres at 4 p.m. Pacific Time on Thursday, Feb. 24 at www.UnRavelledPlay.com, where it will remain available to view for free on demand through March 31. Live seminars featuring experts on creativity and the brain, including Dr. Miller, will take place following the initial screening, and after a screening at 9 a.m. Pacific on March 3.

Music Got Me Here traces one teen’s recovery from traumatic brain injury via music therapy.

Osvaldo Golijov Emerges From the Dark