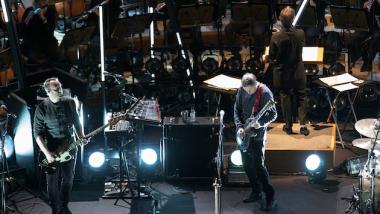 Ask Iceland’s musicians why one of the hottest global music scenes is centered in Reykjavik, and you’ll get a wide variety of answers, or a quizzical look and a shrug of the shoulders.

Roughly equivalent in size to Indiana, with a total population less than that of San Jose, Iceland has become, over the last decade, an international musical phenomenon — a tectonic shift that the Los Angeles Philharmonic has been exploring in depth for more than two weeks.

The Reykjavik Festival began April 1 and lasted 11 concerts, featuring everything from chamber music programs and full-blown orchestral concerts conducted by Esa-Pekka Salonen, to film screenings and site-specific art installations with the contemporary “Ice-rock” trio, Sigur Rós, serving as the festival’s house band. As a coda, the festival will conclude May 19–June 4 with the West Coast premiere of “Björk Digital,” an exhibition of virtual reality videos featuring music from her latest album, Vulnicura.

So. Why Iceland? Why Reykjavik?

“The entire population of Iceland is only 330,000,” Iceland’s noted musicologist, Árni Heimir Ingólfsson, explained. “Iceland didn’t even become an independent country until 1944 when we separated from Denmark. The first symphony orchestra concert was in 1926 and the Iceland Symphony wasn’t founded until 1950. We really don’t have a classical music tradition.

“The only common thread we have is our freedom and individuality,” he observed, in his role as preconcert moderator. “Perhaps that why we don’t make clear distinctions between genres. In Iceland, you’re likely to meet a poet who played in a rock band and is a classically trained violinist. We’re also a very close-knit community: Everybody is either married to someone or is someone’s cousin.”

The landscape also has a lot to do with it, he said.

I think Iceland’s landscape plays a very important, influential role. It’s vast and stark and very rugged. There are geysers and glaciers. There are volcanoes and the Northern Lights. I think that’s why so many composers write music that reflects the landscape, that evolves at a slower spatial pace.

Another one of Ingólfsson’s observations, however, may come closest to hitting the target.

“In Iceland the winters are long and cold and dark,” he said with a knowing smile. “You need something to do!”

The process of assembling and organizing the Reykjavik Festival took place over two years, overseen by Daniel Bjarnason, Deborah Borda, Chad Smith, and Esa-Pekka Salonen.  So far, it has been as wild and colorful as the fuzzy art installation, Neverscape VI (by Shoplifter/Hrafnhildur Arnardóttir) that hangs over BP Hall and covers the stage where the preconcert talks take place, like a rainbow cascade of unraveled yarn.

One thing the festival has made very clear about the Reykjavik scene is that there are no rules, no boundaries, no academically approved style, particularly in contemporary Icelandic “classical music.” At the same time, the festival has been revelatory in terms of introducing American audiences to Iceland’s composers and performers. There have been numerous West Coast premieres and several world premieres of works commissioned specifically for the festival.

That said, it was the presence of Sigur Rós that has attracted so many young concertgoers and made Walt Disney Concert Hall feel more like a rock palace. The range of concerts has, by design, pushed the musical envelope to the bursting point. And while the presenters have stated that the festival was never intended to be a survey of Icelandic music, it definitely has taken on that role on a grand scale.

If a single concert captured the overall spirit of the festival, the range of musical styles and the crazy-quilt nature of the audience, it had to be the marathon on April 15. It featured the combined forces of the Los Angeles Philharmonic conducted by Esa-Pekka Salonen; the choral ensemble, Schola Cantorum Reykjavik; the period-instrument quartet, Nordic Affect; and Sigur Rós, who first performed a lengthy set of orchestral arrangements of their songs by an international array of composers, then returned for a full volume solo set that went on well past 11.

It all began on the most intimate scale with the four members of Nordic Affect: Halla Steinunn Stefánsdóttir (violin), Guðrún Hrund Harðardóttir (viola), Hanna Loftsdóttir (cello) and Guðrún Óskarsdóttir (harpsichord). But, they pointed out, since there is no such thing as an Icelandic baroque tradition, the ensemble has relied on collaborations with contemporary composers to give their music an Icelandic identity.

The three works they performed: Raindamage by Valgeir Sigurðsson, Shades of Silence by Anna Thorvaldsdóttir, and Þýð by Úlfur Hansson were each miminimalist in nature, akin to Morton Feldman in their use of meticulously woven, fragile textures. Shades of Silence, the group explained was created as a soundscape to accompany a softly flowing water sculpture representing five of Iceland’s many glaciers. Almost too subtle for the hall, it would have been nice to be able to hear the work in its watery context. The final piece was meant to be fun, a triadic drone hum-along in which we all took part.

The second phase of the concert grew decidedly in magnitude as delicate choral harmonies by Schola Cantorum Reykjavik gave way to the first orchestral piece on the program, Aequora (2016) by María Huld Marken Sigfúsdóttir. The work is a perfect example of Icelandic landscape evocation, in this case the dancing northern lights, with high strings, winds, harp, piano, and percussion creating gossamer textures that glittered like so many ice particles suspended in air.

Months ago, when the Philharmonic offered its modern music marathon, “Noon to Midnight,” it was the cacophonous performance of George Antheil’s 1933 Ballet mécanique that brought down the house (almost literally). In a similar way, the outrageous Organ Concerto (1930) by Jon Leif (considered the father of Icelandic classic music, who spent most of his life in Germany) proved so radical in its alternations between volume-11 dissonance and soft, fluttery melodies, that it felt more modern and provocative than anything else the festival had to offer. With Salonen conducting the full forces of the LA Phil, with the superb organist James McVinnie as soloist, it was a mind-blowing performance.

The orchestral arrangements of songs by Sigur Rós (Jón Þór Birgisson guitar and vocals; Georg Hólm bass and keyboards; Orri Páll Dýrason drums) seemed bland and ultraconservative in comparison. But clearly this was the music the crowd had come for, as was obvious when the three rockers made their way on stage to perform (among others) “Hrafntinna” (orch. David Lang); “Ekki mukk” (orch. Missy Mazzoli); “Nordur” (orch. Nico Muhly); “Á” (orch. Daniel Bjarnson), accompanied by Salonen and the orchestra. No strong dissonances here. No jagged rhythms, no blaring brass. Just lushly flowing, gooey strings accented by lilting winds and percussion crescendos accenting Birgisson’s signature high-floating vocals and bowed electric guitar.

Every song was greeted with thunderous applause. I thought these arrangements sounded so much the same, they made Sigur Rós sound like Pink Floyd on Prozac. For their finale, however, the group shed the orchestra, filled the hall with smoke and cranked up the volume to heavy metal levels. The audience got what they’d really come for.

To the credit of its organizers and participants, the scope of the Reykjavik Festival has been on a scale impossible to totally represent here. But that very range, with a changing program every night, is what made the festival so exciting.