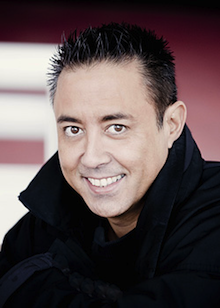 Twenty-three years after “the most important countertenor in the world today” (Opera Today) made his San Francisco Opera debut, Merola and Adler Fellows alum Brian Asawa (b. 1966) returned to perform in the city where he got his professional start. Appearing before a lamentably small, rain-soaked audience in Calvary Presbyterian Church, on the same eve that next generation countertenor Philippe Jaroussky, 36, held forth at Cal Performances across the bay, Asawa shared much of the lovely sweetness and penetrating tonality that, in 1994, snared both a Metropolitan Opera debut and first prize in the Plácido Domingo Operalia International Opera Competition.

In the welcome live acoustic of Calvary Presbyterian, the sheer strength of Asawa’s voice higher in the range was startling. Equally striking, in Scarlatti’s classic “Gia il sole dal Gange” (Already the sun over the Ganges) which opened the recital, were his ability to differentiate repeated verses by variously lightening and adding weight to the voice, and his overcharged, rather stilted stage presence. Although nerves and energy soon settled, and the voice regained almost all the admirable steadiness of yore, Asawa never seemed able to decide what to do with himself when suited up in concert dress. In the recital’s most emotionally charged passages, where his movements seemed almost spastic, his artistry shone best when this listener focused almost exclusively on text and sound.

Given the stunning strength of Asawa’s instrument, the choice to keep the lid on accompanist Charles Worth’s piano only partially open was puzzling. Robbed of its full range of expression, the accompaniment seemed more dutiful than expressive. While the decision certainly shone the spotlight on Asawa’s ability to color his voice, it did not enhance musicality. Was, perhaps, the piano itself not up to snuff? If so, that would explain the heaviness of Worth’s touch in fast passages, and a lack of even flow in the murmuring brooklet of Schubert’s “Liebesbothschaft” (Love’s message) that my companion termed “clunky.”

When performing excerpts from two operas in which he has triumphed, Handel’s Admeto, re di Tessaglia and Mozart’s early Ascanio in Alba, Asawa demonstrated both the breadth of his range and his technical limitations. He has a lovely trill, which is especially clear lower in the range, as well as beautiful warmth and resonance in his lowest notes, and remarkable shine on top. But his is not a fleet instrument. Handel’s “Nò, nò, m’arda nel petto … La tigre arde di sdegno (No, no, let it burn in my breast… The tigress burns with anger) may demand, in piano reduction, lightning fast scales from the accompanist, but it does not call for equal virtuosity on the singer’s part. It was hard not to come away with the sense that as the remarkably virtuosic David Daniels (also b. 1966) rose in prominence — his Met debut came in 1997 — Asawa found himself increasingly relegated to lyric and character roles.

Be that as it may, Asawa’s emotional and interpretive commitment was beyond question. His voice shook with emotion in Scarlatti’s “Se tu della mia morte” (If you by this strong right hand), and ended Handel’s “Sparite, o pensieri (Begone, o thoughts) from Admeto in a deeply moving, gorgeous manner.

Most telling of limitations were songs that called for serenity. Handel’s beloved “Where e’er you walk” (Semele) may have been sung with admirable authentic variations in the da capo, but without the ease and comfort central to its expression. Faring far worse were Schubert’s liquid love song, “Liebesbothschaft,” which called for far lighter and more intimate vocalism than Asawa supplied, and the prayerful affirmation of the composer’s “Im Abendrot” (At twilight), which lacked essential simplicity. Far more successful was “Nocturne,” the first of three Fauré songs on the program, where the sheer beauty of the singing spoke volumes.

The concert concluded with the premiere of Kurt Erickson’s Four Andalusian Love Songs. Composed to ancient Arabic texts whose translations Erickson’s “great love,” soprano Heidi Moss, found in a bookstore, the songs seemed tailor-made for the drama that is one of Asawa’s fortes. Most striking were the ridiculously sly and silly accompaniment to “The Rooster,” a song into which Asawa injected apt hilarity by exaggerating his rolled “r”s; Worth’s incisive if not sufficiently emphatic accompaniment to “Slave Boy;” and Asawa’s beautiful final “you” in the last song, “Absence.” Puzzling, however, were Erickson’s response to the beautiful romance of “Split My Heart,” a poem he termed “sick and unhealthy,” and Asawa’s overwrought response to “Absence.”

The dark emotion of the sole encore, Rachmaninov’s “O Dolga budu ya” (In the Silence of the mysterious night), again showed Asawa at his best. The lovely last note, which he first swelled and then tapered masterfully, set the seal on the evening.