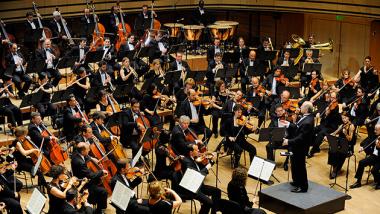 Davies Symphony Hall has been holding something of an impromptu Brahms mini-festival. Last week, the San Francisco Symphony played the Piano Concerto No. 2 with Yefim Bronfman, and for Sunday’s concert in the Great Performers series, the visiting Budapest Festival Orchestra — noted for its single-composer marathons — packed two Brahms symphonies in its luggage.

The two symphonies were Nos. 1 and 3, the more heroic, extroverted half of Brahms’ symphonic output. The orchestra, under its founder and music director, Iván Fischer, gave them a heroic and extroverted performance.

Fischer, though he holds a baton, conducts largely by shaping the music with his hands in a palpable way. For light, airy passages he holds his arms up high and flaps them, willing the players into sounding avian. He sometimes directs small swells with his elbows. The price of this subjective form of conducting is that group entrances are not always precise, the closest thing to a flaw in this concert.

Fischer’s attitude toward rhythm and expression depended on the tempo. Slow sections, like the Andante sostenuto of the First Symphony, showed much flexibility of phrasing, and are prone to gentle ritards. In fast music, he kept to a strong, heavy rhythmic pulse, even though Brahms rarely marks this in his score. Throughout, Fischer favored quick tempos, which makes the fortes more action-packed than grand. This was not solemn or portentous Brahms.

Throughout, Fischer favored quick tempos, which makes the fortes more action-packed than grand. This was not solemn or portentous Brahms.

The First Symphony has more passages of large-scale buildup than the Third. Fischer milked these shamelessly, which reached an almost comic extreme in the quiet pizzicato sections of the introduction to the finale. Fischer began by dialing these far down in both tempo and volume, for maximum misterioso, then quickly ramping them up. Though Brahms directs both accelerando and crescendo here, his directions are rarely followed so lavishly. The coda of the movement was a real audience-pleasing galumphing stretto. It was obvious why the First Symphony was placed at the end of the concert.

The Third had its share of drama, with real passion in its climaxes, yet without as much mugging. The more relaxed approach was illustrated by Fischer’s decision to take the first movement exposition repeat of the Third, yet not that of the First, a work which is big enough as it is.

At least from where I sat, in the front orchestra section, the string sound was dominated by the violins, whose two sections sat across from each other at the front. This had the interesting effect that the interplay between the firsts and seconds, which becomes quite elaborate in parts of the Third Symphony, was vividly audible. The violin sound throughout was hard and shiny, neither shrill nor mellow.

The winds made a smooth choir, blended finely with each other though keeping separate from the strings. Particular honors for milky-soft sound go to first oboist Victor Aviat. The horns were equally outstanding, playing with the flexibility of clarinets, then turning hard and clarion for some passages in the coda of the opening movement of the First. Brahms instructs these to be ben marcato, and the horns marked them well by emitting unmissable growls.

Unlike the last visiting middle-European orchestra I’ve heard, the Vienna Philharmonic, the Budapest Festival Orchestra has a lot of women among its number, starting with the concertmaster, Violetta Eckhardt, whose well-played solo in the Andante of the First Symphony was as shiny as the ensemble sound. I’d guess about a third of the performers, concentrated in the upper strings, were women.

I wasn’t sure how relevant this would be to mention in a review, until the musicians made it relevant. For an encore, they all stood up, moved into the center of the stage where the violas and cellos had sat, and sang. The piece they sang was, of course, by Brahms, his “Abendständchen” (Evening Serenade, Op. 42, No. 1), an unaccompanied four-part chorus with the air of Renaissance antiphonal church music tinged with madrigal. They sang it very well. Let’s hear the nearly all-male Vienna Philharmonic do that.