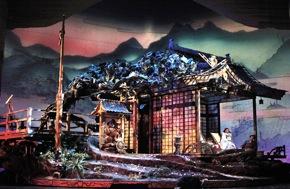 When a veteran soprano, lauded for her lyrico-spinto portrayals, takes over as Puccini’s Madama Butterfly at San Francisco Opera, hopes are high for a late-season triumph. But the triumph was not to be. Even with the advantage of being heard in the second performance of her six-performance run, when she had presumably settled into the role, Daniela Dessi, 53, sounded as though she has entered the autumn of her career.

Dessi’s surfeit of skillfully negotiated pianissimi, which initially impressed as evidence of artistic sensibility, eventually revealed themselves as attempts to avoid the loosening vibrato and spread tone that surfaced most of the time she put pressure on her voice higher in the range. Nor, when she did open up, were her fortes as searing as Puccini’s music demands.

Although as recently as 2008, Dessi created such excitement as Tosca that her audience in Florence demanded an encore of “Vissi d’arte,” this past January she walked off the set of La traviata in Rome after veteran director Franco Zefirelli called her too old and plump for the part of Violetta. Here, she was as slim as could be, but sounded far more like an aging artist than a 15-year-old.

Dessi might have been able to pull off the role of Cio-Cio San if her conductor had been able to maintain the forward momentum and urgency that even the most lyric of Puccini’s passages require. But debut conductor Julian Kovatchev seemed to beat time with little awareness of where he was going. Each of Dessi’s phrases seemed accompanied as a separate entity, with no sense of overarching line. It didn’t sound like Puccini.

Tempting though it may be to ascribe Kovatchev’s measure-by-measure approach to a respectful effort to support his prima donna, his big opportunity to shine solo, which begins with the “Humming Chorus” and extends from night to daybreak in the final act, fell flat. Where SFO’s first cast conductor, Music Director Nicola Luisotti, made something exquisite of the chorus, and produced some of the most rapturous playing in the orchestral solos I have ever heard from the San Francisco Opera Orchestra, Kovatchev’s efforts sounded pedestrian. Were orchestra members tired from their Janacek debut the night before, or simply uninspired?

Tenor Stefano Secco, whose opening night Pinkerton was one-dimensionally loud rather than involving, has relaxed into the role. Sounding considerably younger and fresher than his child bride, Secco softened and rounded many of his phrases, ramping up intensity in the final act. He may not be an emotionally riveting Pinkerton, but his consistently beautiful singing left much to be grateful for.

Similarly, Quinn Kelsey, whose opening night Sharpless lacked some of the beauty he usually brings to every role he sings, returned to top form. What a gorgeous voice the man has. And while bass-baritone Christian Van Horn’s Bonze seemed a mite underpowered at first, he quickly emerged from the shadows to thunder through the role.

By contrast, tenor Thomas Glenn’s Goro, who rarely lurked in the shadows, continued to seem too forthright for the part. If Director Jose Maria Condemi was attempting to avoid the unctuous stereotyped Goro of many productions, he steered much too wide of the mark. Instead of hating Goro, I simply wanted to flick him away, like another annoying ant on the kitchen counter. The same goes for Austin Kness’ goose-stepping, inconsequential Prince Yamadori.

Steering even wider from her role’s core was mezzo Daveda Karanas as Butterfly’s servant, Suzuki. After SFO’s decade of heart-rending Suzukis from Zheng Cao, the absence of any sympathy, either vocally or dramatically, left a hole in the production. As moving as our previous Butterfly, the great Patricia Racette, was in her part, it was Cao’s immense empathy as Suzuki that drove the opera’s tragedy even deeper into the heart.

Although Clarke Dunham’s sets for Harold Prince’s 28-year old production are attractive from the top balcony, they are deeply unsettling on the ground floor. The set frequently rotates, the lighting changes ... It’s as though we are in a Hollywood movie that’s afraid to stop for a single second, lest attention be diverted by the popcorn.

As for the black-clad Koken (stagehands), Prince and Condemi transform them into over-stylized, lurking presences that further clutter up the claustrophobic set. Don’t even ask about the shtick in the death scene. How many gimmicks can a production sustain before it becomes so full of itself that anything but a supreme partnership of principals and conductor is doomed to fall flat?