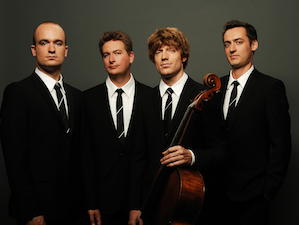 Calder Quartet to the Rescue

The Calder Quartet rode to the rescue of the San José Chamber Music Society on Monday. The ensemble previously scheduled for the society’s concert at Le Petit Trianon canceled due to a severe illness, not much more than a week in advance.

Fortunately the Calder posse didn’t have to ride very far. The Los Angeles-based quartet was in the Bay Area last weekend for the Conlon Nancarrow centenary festival in Berkeley, and the players were happy to plug in the vacancy.

They carried a fairly severe program with them, though they did not give us any Nancarrow. All four pieces push, in one way or another, at the edge of the quartet idiom practice of their time.

Strangest and severest of the works was Arcadiana by the contemporary British composer Thomas Adès. This is a suite of seven short movements, most of which flow together, though the Calder players took more pauses between movements than the score directs. The suite depicts various aspects of paradisiacal Arcadia, which Adès depicts as mostly a rather quiet place. Four of the movements consist of chromatic melodies on one or two instruments while the others dart wispily around them. The Calder players gave these more heft and firmness than does the Endellion Quartet on their recording. Two of the movements are consonant and rather beautiful. The central movement, dubbed a “tango mortale,” is different from all the rest. Its grinding heaves and emphatic sforzandos on the bridges evoke images of monstrously deformed string instruments, like the radiation-mutated children in 1950s science-fiction horror films, crying out in anguish and pain. It was the most disturbing sound I’ve heard from a string quartet since the Christopher Rouse piece at the last Calder Quartet concert I attended, so I can’t say I wasn’t warned.

The other unusual work on the program was Three Pieces for String Quartet — almost, though not quite, Igor Stravinsky’s only work for this ensemble. He wrote it immediately following Le Sacre du Printemps, and it sounds rather like that revolutionary work re-envisaged for a different medium. Stravinsky actually uses more unusual playing techniques than Adès, who is something of a “back to basics” composer. The energy and turbulence were there, yet also there was a smooth, coherent, almost organ-like blend of sound, the mark of an ensemble determined to make a unity of itself. The tone color in the third piece, the most lyrical, and almost spiritual, of the three, again felt as if it floated out of a science-fiction movie, this time from the special effects department. The previous two, more angular, pieces had something of the quality of spectral music. They floated in space, despite their earthy tone, detached from everyday concerns.

Nor were the more conventional quartets on the program light-hearted things. Mendelssohn’s Quartet in F Minor, Op. 80, is one of the most anguished pieces in the repertoire. One of Mendelssohn’s last compositions, it’s a dark, almost jarring work with little resemblance to the composer’s popular image. It marks a new departure that, had the composer lived, might have taken him in unexpected directions. Adès’ airiness is almost more in the stereotypical Mendelssohn spirit. The Calder Quartet played Op. 80’s turbulence without jitteriness. The energy and turbulence were there, yet also there was a smooth, coherent, almost organ-like blend of sound, the mark of an ensemble determined to make a unity of itself. This approach had kept the Adès and Stravinsky from flying off into fragments, and it worked equally well on Mendelssohn.

Mozart’s Quartet in C Major, K. 465, completed the program. This is the work known as the “Dissonant” Quartet for the clashing harmonies of its slow introduction. This puzzled listeners of Mozart’s day; even Joseph Haydn, to whom the quartet was dedicated, was reduced to saying that if Mozart wrote this, he must have had a reason, though Haydn did not presume to guess what the reason was. Calder violinist Andrew Bulbrook, speaking after the concert, pointed out that daring and unusual harmonies run through the work, and, he could have added, through much of Mozart’s more serious music. The rich ensemble sound and razor-crisp playing made for a cool, jewel-like performance. Especially coming, as it did, right after the Stravinsky, Mozart’s dissonant opening doesn’t sound particularly dissonant to modern ears.

The players let the introduction build up, slowly and emphatically, to make the point that might have been lost from Mozart’s harmonic language. The main body of the work was lively, sometimes fiery, serious-minded yet free of anguish. Potentially emotional moments like the trio of the minuet, and the second theme of the finale, had the concentration of fine playing without feeling perturbed. The rich ensemble sound and razor-crisp playing made for a cool, jewel-like performance.

So the San José Chamber Music Society, and the audience at this concert, owe great thanks to Bulbrook and his colleages — violinist Benjamin Jacobson, violist Jonathan Moerschel, and cellist Eric Byers — for making this hastily-substituted program work and for playing it with the practiced exactitude of a single individual in four bodies.