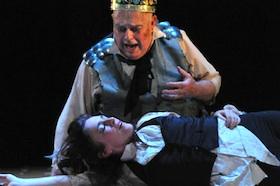 Caliban Dreams, and We Smile

Long ago and far away, in the land of sorcerers, shipwrecks, and servitude described in Shakespeare’s Tempest, the orphan Caliban is intent on murdering his foster father/wizard/master, Prospero. Then, he undergoes a mysterious transformation. Just what triggered his conversion, which occurred during a drunken descent into darkness, has for the past 10 years occupied the imaginations of director/dramaturge Melissa Weaver, librettist Amanda Moody, and composer Clark Suprynowicz.

At last, the unexplored subterranean interaction between Caliban and the immortal fairy Ariel has given birth to Caliban Dreams. At its premiere performance, mounted by West Edge Opera (formerly Berkeley Opera) in the El Cerrito Performing Arts Theater under the baton of Jonathan Khuner, and soon to be seen in Sonoma State’s Evert B Person Theater conducted by Lynne Morrow, the two-act, 140-minute opera emerged as a delightful romp and major vehicle for the astounding, seemingly indefatigable tenor John Duykers.

The two-act, 140-minute opera emerged as a delightful romp and major vehicle for the astounding, seemingly indefatigable tenor John Duykers.

Suffice it to say that Moody and Suprynowicz attempt to fill in the gaps in Shakespeare’s play by putting Caliban to sleep, with Ariel manipulating his dream. Despite her immortal powers, Ariel is not always in control. Caliban, egged on by Ariel’s three enslaved sisters, the Furies Vesta, Pedrera, and Dolores, seems obsessed with murdering Prospero and winning the hand of his equally unseen daughter, Miranda.

Two hours later, Caliban undergoes one of those “now you see it, now you don’t” instantaneous conversions in which love triumphs over a classic victim/persecutor script. Regardless of whether the transformation even moderately illuminates Shakespeare’s intentional darkness, it serves as a mighty good excuse for an old-fashioned singspiel, complete with spoken dialogue, arias, choruses, dance numbers, and enough orchestral and visual hocus pocus to keep us entertained.

A Potpourri of a Score

In the program book — you are advised to arrive early and read all the statements so you can put the pieces together — Suprynowicz describes his score as a composite of “the music-hall strains of Gilbert and Sullivan, a jot of medieval music, some Impressionism, the pungent dissonances of Thelonious Monk and of Stravinsky, and also trance-like rhythms from tropical regions.” If that sounds like a forbidding amalgam, it’s anything but. The dissonances are ubiquitous though mild — think L’Histoire du soldat with an extra smile — and the music hall references consistently droll. You may not leave whistling the tunes, but you will certainly recognize when an aria comes along.

One of the more intriguing aspects of the score is Suprynowicz’ use of exotic instruments. Berimbau, quica, kalimba (African thumb piano), and guiro help the instrumentation triumph over the theater’s dry yet transparent acoustic, creating a host of magical, iridescent moments. Even though budgetary constraints prevented the full realization of set designer Chad Owens’ shadow play, the music, libretto, and exceptionally strong cast make their considerable mark.

Duykers (singing Caliban) is a miracle. It has been 45 years since his debut with Seattle Opera, and 24 years since he created the role of Chairman Mao in John Adams’ Nixon in China, but his voice sounds in better shape now than it has in some of his performances over the last two years. The top may be somewhat pinched, and the volume diminished, but his unique timbre and deeply involving declamatory style, histrionic immediacy, impeccable enunciation, and artistic brilliance remain undimmed. If that sounds like a euphemism for “hanging on way past his prime,” it’s not. Unless you’d heard the man 20 or 30 years ago, you might well think he’s at the peak of his powers. Think “the Plácido Domingo of new music,” and you’re on target. Duyker’s marvelous tour de force is reason enough to put Caliban Dreams on your must-see list.

It’s entertaining to the core, directed with a fine sense of forward momentum.

The multitalented soprano Laura Bohn (Ariel) is quite the find. A graduate of the Dell’Arte International School of Physical Theater and Manhattan School of Music, with credits that include musical theater as well as opera, Bohn has no trouble lifting her leg high or climbing a pole while singing an unbroken line. When she sings out high in the range, her voice sounds a mite too thick and self-consciously operatic. But when singing softer and lower she’s totally in her element, and a major delight.

Equal credit is due the wonderful chorus of enchanted creatures, drawn from Robert Geary’s Ancora subdivision of the Piedmont East Bay Children’s Choir (led by soprano Kate Offer), and the capable Movement Ensemble of Rosie Fry, Gilberto Melendez, Lily Urmann, and G. Randall Wright. The latter acts as a kind of shadow chorus, commenting on and occasionally influencing the action in ways not always clear.

Flawless in their portrayals, the Fury Sisters Aimée Puentes (Vesta), Alexis Jensen (Pedrera), and Scott Graff (Dolores) might be thought of as the Ping, Pang, and Pong of Caliban Dreams. The big-man-in-drag thing initially seems cliched, but Suprynowicz employs a male Dolores to create a wide-compass vocal trio of soprano, mezzo-soprano, and bass-baritone. Thankfully, rather than camping it up, director Weaver has Graff act and sing as naturally as any large-framed female Fury in a mildly vengeful mood might do. Translation: success.

That, in the end, is how I feel about Caliban Dreams. It may not possess the dramatic urgency and thrilling lyricism of San Francisco Opera’s recent Ring, but neither is it weighed down by long passages of dark tedium that patrons often relieve with intermission visits to the bar.

Caliban Dreams deserves more than a chance to be seen and heard. It’s entertaining to the core, directed with a fine sense of forward momentum, and a feather in the cap of Khuner, Morrow, Artistic Director Mark Streshinsky, and its three cocreators. Even as the company straddles the line between West Edge Opera and Berkeley West Edge Opera, switching back and forth between both titles, it continues to move forward with strength.