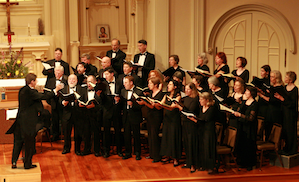 On a bright Sunday afternoon in Berkeley, the 30-voice California Bach Society, under the direction of Paul Flight, delved once again into forgotten gems from the musical past. Joined by the New Esterházy Quartet, the group brought their concert season to a close with a delightful presentation of lesser-known works from the minds of Mozart, Franz Joseph Haydn, and his brother, Johann Michael Haydn.

The concert opened with Mozart’s early motet, Misercordias Domini, K. 222. The choir took a crisp and delightfully clean approach to the rich counterpoint in the piece, and the members of the New Esterhazy Quartet, along with bassist Farley Pearce and organist Esther Archer, maneuvered gracefully between accompaniment roles and instrumental passages.

The motets by Michael Haydn showed the composer’s diversity (and why Mozart, among others, esteemed his music.) Eripe me, Domine (Deliver me, O Lord), a concise but colorful setting of psalm verses, and Christus Factus Est, were performed beautifully. The group embraced the harmonic tension and releases connected to the text, giving an affective rendering of these shorter pieces. The final motet, Ave, Regina Coelorum (Hail, queen of heaven), was a double choir antiphon reminiscent of Giovanni Gabrieli almost two centuries earlier, but with Classical harmonies. The choir reconfigured its forces to produce the double-choir effect — a refreshing new take on their sound — though unfortunately the change also exposed a few, minor tuning problems in the sopranos in the upper registers.

Joseph Haydn’s Salve Regina was the first time in the program we really got to hear the soloists at work. Soprano Rita Lilly gave an excellent performance — her light, yet powerful voice sat beautifully at the front of the ensemble’s texture. The other solo vocalists, alto Gabriela Solis, tenor Mark Bonney, and bass Sepp Hammer, also had wonderfully expressive and clear moments throughout. The ensemble was also on pointe for Mozart’s Missa Brevis in F Major, K.192, which, through its virtuosic passages, stole the show.

Mozart’s Missa Brevis in F Major, through its virtuosic passages, stole the show … A combination of devout and light, crude and poetic, Haydn’s part songs set a variety of texts to equally varied music.

The New Esterhazy Quartet was in fine form for the String Quartet in B-flat Major, Op. 2 No. 6, which opened the second half. They maintained a light playfulness of spirit, characteristic of this music. The intimate timbres of their period instruments were excellently suited to the acoustics of St. Mark’s Episcopal Church.

Joseph Haydn’s Part Songs, Hob. XXVc, were a delightful surprise. A combination of devout and light, crude and poetic, the part songs set a variety of texts to equally varied music. On the lighter side was “Die Harmonie in der Ehe” (Harmony in marriage), in which a married couple shares their love of the same things — drinking, gambling, and swaggering, that is. Similarly “Die Beredsamkeit” (Eloquence) is a tongue-in-cheek ode to drinking, where water makes men silent, but wine turns everyone into orators. It was a wonderful moment when the ensemble cued us in that they were “in on the joke”, when the last word, “stumm” (mute) was sung in a whisper.

These songs could also take a more serious tone, as in “Der Greis” (The old man), in which a man in the twilight of life accepts his impending fate by concluding that his life has been a song, a sentiment rendered sensitively and beautifully by the choir.

The rapt attention of the almost-full house and the infectious enthusiasm of both performers and audience members alike bolstered the festive atmosphere and made the sense of musical rediscovery all the more exciting. This is where the California Bach Society is at their best — delightfully breathing new life into works from the centuries in which their namesake lived and worked.