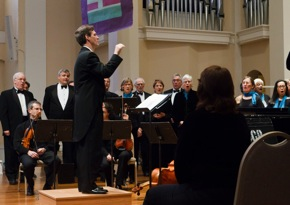 The lingering rays of afternoon sun filtered through the lavender-tinted windows of First Congregational Church as Chora Nova took the stage Saturday night. The concert brought the group's season to a close with a festive finale. The group, under the direction of Paul Flight was joined by soloists soprano Jennifer Paulino, countertenor Clifton Massey, tenor Mark Alexander Bonney, and baritone Sepp Hammer.

The concert opened with the Litaniae de venerable Sacramento (Litany of the Venerable Sacrament). The group did an excellent job in emphasizing the dissonances in the first Kyrie. Such moments are infrequent in Zelenka's music, but when they happened the group really made them count, hanging on the harsher sonorities until their release became all the more satisfying. The duet between Paulino and Massey during the “Pater de coelis” (Heavenly father) was wonderfully matched — both soloists brought a sensitive and clear voice to the performance, still with clear personalities and expressive of the texts, but also a beautiful collaboration.

The ensemble did a good job of playing up the representative aspects of the music in the De Profundis. As with many others of its kind, Zelenka's De Profundis begins with the basses and rises "out of the depths" as higher voices enter. This time around, the chorus made the most of the roiling, turbulent, rising figures Zelenka used to set this text. These cries from the depths were forceful and raw, not a neat matter of clean baroque symmetry, though that was also present, but a boiling upwelling that was more than simple word-painting.

The Regina coeli (Queen of Heaven), while showcasing the higher voices of the choir, had a few rough spots when uncertain entries during polyphonic passages smade it seem like sopranos and altos were pulling apart from one another. The group recovered and reconvened, arriving at the final Alleluia with the joyful expression it demanded.

The Gloria from the Missa dei Filii was the highlight … Paulino has graceful yet powerful voice and an expressive declamation that made the aria a joy to listen to. Massey, Bonney, and Hammer also delivered masterful and expressive interpretations of the text.

The Gloria from the Missa dei Filii (Mass of God the Son, 1745) was the concert highlight. The ensemble achieved its richest and best-balanced sound during this piece. The orchestra was particularly notable in this regard, especially during the moments when the sackbuts (early cousins of the modern trombone) blended with the chorus. The result in a progression of rich sonorities. Jennifer Paulino graceful yet powerful voice made her  aria on "Qui tollis peccata mundi" a joy to listen to. Massey, Bonney, and Hammer also delivered masterful and expressive solos.

The Gloria concluded with an all-out fugue, about which Zelenka did not hold back. The introduction of the fugue subject almost felt tongue-in-cheek, as if Zelenka was trying to grab the audience's attention with an assertive "watch for it, here comes the fugue" short — short — long, short — short — long motive that then spun off into the elaborate counterpoint one would expect from a late baroque fugue. The chorus likewise did not hold back on its confident declaration of the theme, which was charmingly refreshing, especially at the end of such a sizable mass movement.

The concert, overall, was an exuberant celebration of the composer and his diverse repertoire. It was not a perfect performance from start to finish, which serves as a friendly reminder in an age of automatic standing ovations that even with the insistence upon perfection, live performance embodies something much more important: a performance that exists in the moment and in a tangible and immediate way.