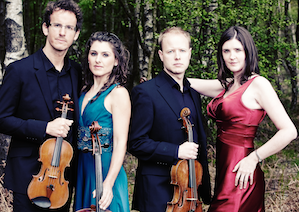 Routine travel articles often say that “(name of country) is truly a land of contrasts.” So I feel a bit like a mediocre travel writer when I say that the Carducci String Quartet’s performance at Kohl Mansion in Burlingame on Sunday was truly a concert of contrasts.

The contrasts weren’t so much in the repertoire. Haydn’s “Sunrise” Quartet in B flat, Op. 76, No. 4; Debussy’s Quartet in G Minor; and Mendelssohn’s Quartet in F Minor, Op. 80, are all serious works. Haydn’s is one of his last quartets, postdating his visits to London, from a time when his genial wit had begun to fade in favor of a new sense of gravity. Mendelssohn’s is almost his very last work, a tragic and churning composition written in the grief of his sister’s death and only several months before his own. Debussy’s, though equally weighty, does have one contrast: It’s a relatively early work. It’s quite predictive of where his style would take him in the future, while if Mendelssohn had lived and gone in the direction his quartet is pointing, his future music would have been unrecognizable as being by the same hand as his earlier works.

The contrasts Sunday came more within the pieces and between the players. The Haydn and Debussy works, each of four movements, were split into distinct first and second halves. Haydn’s first movement — which opens with the eponymous rising “sunrise” theme in the first violin, later inverted into a “sunset” by the cello — was sober, even a bit grave, and his Adagio turned more to tragedy than Mendelssohn’s did. Suddenly, though, Haydn’s minuet bounced in place with energy and enthusiasm, and his finale, with a recurrent main theme often likened to an English folk song, sounded more like one of the infectious Renaissance tunes in Playford’s English Dancing Master, with a lively, tripping run through its grace notes.

Where the general tone of the Haydn had been smooth and clean, the Debussy was as gritty and hard-edged a performance as they come. There wasn’t a trace of wallowing in languid Wagnerian harmonies here, though there were some sumptuous passages. Each movement took its character from the opening notes, and, as in the Haydn, the contrast was between the halves. The strong motto theme for the four instruments together that opens the first movement, and the pizzicato chords for first violin and cello that begin the following scherzo, were viciously bitten off and chewed up. The remaining movements begin with thoughtful solo passages: second violin followed by viola in the slow movement, cello in the finale. What came after in each case was less vehement than the earlier movements, though hardly gentle. It was here that the sumptuousness made its occasional appearance.

In contrast to these, the Mendelssohn was more of one piece. All three of the jagged, hyperactive fast movements rattled vigorously with the grit of the first half of the Debussy. The Adagio, often seen as an elegy, came off similarly to the rest of the quartet: unusually fast, and almost without emotion, certainly with no sense of grief. Instead, it was hard and serious.

Families That Play Together

The Carducci Quartet consists of two married couples, which leads to the most-asked question the players get: How do they avoid taking work problems home with them from rehearsal? Speaking during the concert, first violinist Matthew Denton challenged the audience to figure out who was married to whom from their interactions while playing. Actually, it wasn’t difficult, even without the clue afforded by surnames.

Suddenly, Haydn’s minuet bounced in place with energy and enthusiasm.

Matthew and cellist Emma Denton formed a strong bond across the stage. With his smooth, almost soapy (if that’s not a word of criticism) violin tone, Matthew is the quartet’s leader, while Emma is more its heart than its base. During the Haydn, her clean, hollow, slightly woody sound gave the aura of Baroque string playing. In the Debussy and Mendelssohn, her always-strong tone varied more, often turning drier and metallic, and was always conspicuous. I would like to hear the two Dentons find an equally strong pianist and play trios.

Second violinist Michelle Fleming and violist Eoin Schmidt-Martin contrasted with the Dentons as more retiring, even by the standards of middle voices. Fleming has a lighter tone than Matthew Denton and is something of a chameleon. Throughout the concert, she alternately leaned toward the first violin or the viola, depending on whom she was playing more closely with or whose phrasing she was following. At any moment, her sound more closely resembled that of the one she was being attentive toward. In the Haydn, Schmidt-Martin was extraordinarily reticent. He became bolder later. Those pizzicato chords that begin Debussy’s scherzo are immediately followed by a viola solo. Schmidt-Martin played that, and subsequent passages, with the expression and bite that the context demanded.

In some respects, the Carducci Quartet is a restrained, classical ensemble.

In some respects, the Carducci Quartet is a restrained, classical ensemble. The players perform with relatively close vibrato, steady tempos, and a remarkable absence of small, momentary fluctuations of volume. In some high-Romantic repertoire, this could be a fatal void. A more emotive style, though, would have been inappropriate for these strong, severe performances of Debussy and Mendelssohn. And while the evenness of volume robbed the Haydn of one of its expressive dimensions, the clean classicism of this performance made up for it.

That clarity in the Haydn, along with the strength of the Debussy and the Mendelssohn, made for a strong, captivating concert. Where the Carducci players showed how they truly excelled, though, was in the encore, the “wrong note” polka that Shostakovich extracted from his Age of Gold ballet and adapted for string quartet in 1931. This was as crisp and lively as anything in Haydn’s finale and had the previously unexperienced (in this concert) character of being fun. All four players were at their most intense and extroverted. If anything could be more rewarding than what we heard, it would be the Carducci playing an evening of caustic modernist works like this.