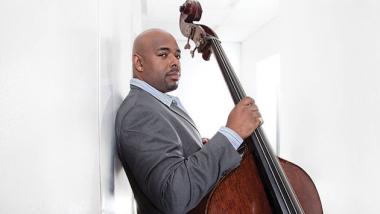 Christian McBride, the Face of the Bass, Goes Classical for a Night

Before Christian McBride brought his ensemble-mates to the SFJAZZ Center’s Miner Auditorium stage Thursday night he set out some ground rules for an evening of chamber music in the West Coast’s premiere jazz venue. Genial and seemingly at ease as the host, he declared that he was suspending the usual decorum for a classical recital, and that if so moved listeners should feel free to respond to the music by clapping, screaming, or shouting: “Within reason,” he added

The quintet’s spacious orchestration provided a wide window to hear McBride’s resonant, dark and woody sound. He’s a bassist who rarely has trouble making himself heard, even with his Grammy Award-winning big band, but to hear him in this context was a particular pleasure.

The ad hoc ensemble brought together an interesting collection of musicians. Serving as the rhythmic fulcrum, San Francisco Opera’s Carla Maria Rodrigues held down the workhorse viola part with aplomb, while second violinist Evan Price played with poise and rhythmic acuity (a former member Turtle Island Quartet and the Hot Club of San Francisco, he celebrates the release of his new chamber jazz album Dialogues at Freight & Salvage Oct. 23).

The only non-Bay Area musician was UC Santa Barbara faculty member Jennifer Kloetzel, though the world-class class cellist is a familiar presence on Bay Area stages from her years at San José State University as the founder of the now disbanded Cypress String Quartet, which was the school’s ensemble-in-residence from 2003-2009. She was McBride’s RA at Juilliard until his headlong plunge into touring and recording as a jazz artist ended his conservatory education, and the evening was convened partly as an opportunity for them to play together some three decades later.

If the quintet lacked the precision of a working ensemble, it interpreted Dvořák’s ravishing piece, particularly the throbbing Poco andante, with a conversational responsiveness that served the music well.

The concert’s second half offered a lovely but decidedly anticlimactic rendition of Schubert’s Piano Quintet in A Major, “Trout,” a piece that suffered partly from the absence of Swensen. But mostly the fault lay in the piece’s construction. Pianist  played with spirit, but loitering in the upper register the cloying piano part is by far the least interesting component of the Trout, though the instrument dominated the piece sonically (and sartorially, too, on Thursday).

With the string players dressed in earth tones and Koenig in a light-reflecting powder-blue shirt he was inescapably the center of attention, a fact exacerbated by ongoing communication breakdowns between him and his page turner. The result was that McBride dropped into the background, while playing with an anxious edge.

At 45, he has attained visibility that rivals Wynton Marsalis, though with his catholic taste and abiding passion for James Brown he comes with none of the trumpeter’s ideological baggage. Last year he took over as artistic director of the Newport Jazz Festival, one of half a dozen high profile gigs on his plate, including serving as co-director of the National Jazz Museum in Harlem and host of National Public Radio’s weekly radio show “Jazz Night in America.”

Hailed as a virtuoso with hundreds of recordings to his credit, he’s got nothing to prove. If tackling Dvořák and Schubert was a lark, he helped both pieces take flight. McBride continues this season’s run as an SFJAZZ resident artistic director Saturday with two shows featuring his big band and vocalist José James. The four-night residency closes Sunday with a double bill presenting two trios, Remembering Ray Brown with longtime collaborators Benny Green (piano) and Russell Malone (guitar), and Tip City with rising pianist Emmet Cohen and guitar master Rodney Jones (Tip City also performs at Kuumbwa Jazz Center on Monday).

Superb violinist Ian Swensen may be more self-effacing than his better-known contemporaries, but that's all to the advantage of San Francisco Conservatory students, who will get to play with him in a rare performance of the French Romantic Ernst Chausson's Concerto.