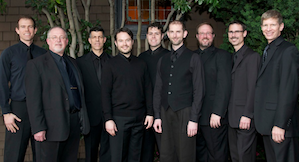 Clerestory Takes on the Bard

Saturday night at St. Mark's Lutheran Church in San Francisco, Clerestory performed a program, "The Bard," based entirely on the words of William Shakespeare. The ensemble's nine men had chosen musical settings of Shakespeare, written by composers mostly born in the 20th century, many of whom are still living.

The various songs, spoken texts, and sonnets were organized into a series of categories, starting with some songs which had been set better during Shakespeare's time than more recently. The greatest Shakespearian actors are schooled in finding the music in the Bard's spoken as well as sung texts. I was not hearing much evidence of Clerestory's ability to create phrases through subtle word stresses and dynamic contrasts.

Was the problem with the singers, or the composers? Why was a song by Amy Beach about a glittering light, a drowsy fire, and elves and fairies sung like a big loud showpiece? Why did one composer choose to set Hamlet's most famous soliloquy by beginning with a lengthy prologue on "to," the least important word in the opening phrase?

When we got to a category called "Supernatural," it was clear that the composers mattered a lot, and the singers got into the groove. Ralph Vaughan Williams' song, "Full Fathom Five" (from The Tempest) was a superb setting of the words, assisted by dynamic variations. He also set spoken words effectively — Prospero's in "The Cloud Capp'd Towers " (The Tempest) and a fairy's poetic words, "Over hIll, over dale," (A Midsummer Night's Dream).

Interspersed with Vaughan Williams' settings were two by Jaako Mäntyjärvi — "Lullaby" (A Midsummer Night's Dream) and "Double, Double, Toil and Trouble" — the witches scene from Macbeth — both wonderful settings and the latter featuring an occasional dramatic falling tone and a great group stamp on the last word.

A group of Shakespeare's songs included the unabashedly tonal "Tell me where is fancy bred" (The Merchant of Venice), by Matthew Harris. Vaughan Williams' "The Willow Song" (Othello), beautifully sung by a quartet of treble voices, also made a good case for mostly tonal harmonies.

A final group included two songs and a spoken epilog. Cory Johnson's "Hark, hark! the lark at Heaven's gate sings" (Cymbeline) was a nice four-part choral setting, each part well defined, with plenty of repetition contributing to getting the words across.

Stephen Sondheim's "Fear no more" (Cymbeline), in Kevin Baum's arrangement for chorus, featured some good solo voices. Märtyjärvi's setting of Puck's epilog from A Midsummer Night's Dream, sung twice, the second time lickety-split, made a good ending for the concert.

As encore, Clerestory sang a four-part setting of Purcell's "If music be the food of love," often attributed to Shakespeare, although only the first line is Shakespeare's.