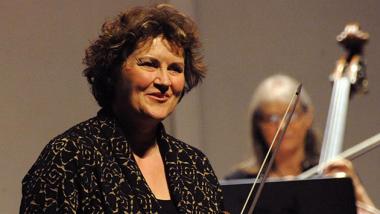 Live at Mission Blue is alive and well as a splendid concert in Brisbane on Saturday showed. Its title, Masters of the Baroque, could have been taken to mean not just the composers on the program but the master players who performed it: Elizabeth Blumenstock on violin, JungHae Kim on harpsichord, and John Dornenberg on viola da gamba.

A brief pre-concert talk with the players, chaired by Bruce Lamott, prepared the audience well for the first piece on the program, a trio sonata by Dietrich Buxtehude. Instead of a solo violin accompanied by bass lines, we heard three solo instruments. Blumenstock’s fiery allegro opening was matched by equally spirited passages on both gamba and harpsichord.

J.S. Bach's harpsichord suite in F Minor, BWV 823 is seldom performed because it has only three short movements, but was a jewel of a piece under Kim’s hands. Bach’s Sonata for Violin and Harpsichord in G major, BWV 1019 included the players’ substitution of an adagio movement for an allegro, creating an unusual structure, two lively allegros bookending three slow movements. Blumenstock is well known for having one of the fastest bows in town, but her slow movements are also deeply felt and very moving.

Sonnerie de Sainte Genevieve du Mont de Paris (Bells of St. Genevieve) by Marin Marais, featured a three-note bell motive for the gamba, sometimes minor, sometimes major, coming and going among amazingly florid passages. Dornenberg’s fingers match Blumenstock’s, and this repertoire for solo gamba was a revelation to a listener accustomed to hearing Baroque pieces held together mostly by a continuo bass line. The harpsichord's tinkly, plucked strings were given the bell motive when the gamba was too busy. It was a pleasure to hear what Marais could do with such a simple theme.

A trio sonata by Jean-Marie Leclair began the second half of the concert, followed by pieces for solo viola da gamba by Carl Friedrich Abel. I am indebted to Dornenberg for demonstrating how much wonderful music Abel wrote for this instrument.

Music by Rameau ended the concert, the Pieces de Clavecin en Concerts No. 5. Rameau instructed the violinist and gambist to pay attention to the harpsichord in these pieces. Kim’s superb playing showed what Rameau had in mind. One of my favorite details was a speedy run up an octave on the violin, immediately echoed on the harpsichord. The gesture recurred a number of times, always welcome.

Harpsichord builder Kevin Fryer is the artistic director of Live at Mission Blue. He discovered the building, with its superb acoustics, and he provides a variety of harpsichords. Concerts are informal, and both players and listeners feel closely connected. While a significant number of San Franciscans attend the concerts, the majority of audience members are residents of Brisbane, and city officials are involved in the work of presenting the concerts. Their efforts are paying off.