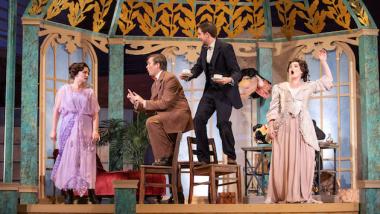 Once Upon a Time in Hollywood, Tropic Thunder, Birdman, Mulholland Drive: All shamelessly self-congratulatory movies that focus, in some fashion, on the filmmaking process. Much akin to how Hollywood loves making films about Hollywood, operatic composers love writing works about opera. The Impresario and Ariadne auf Naxos fit easily into this category.

Mozart composed The Impresario in 1786, contemporary to his well-known opera buffa Le Nozze di Figaro. As a singspiel — a theatrical work combining spoken dialogue with songs and incidental music — it is much shorter and more lighthearted than a typical comic opera. The Impresario tells the story of an opera director hoping to retire to the country while two sopranos upstage each other in a competition to determine who will be billed as the company’s star. Madame Goldentrill — a highly experienced and ambiguously European dramatic soprano — and Miss Silverpearl — a greenhorn coloratura who couldn’t be more American — are as different as can be. The contrasting pair both shine as stars — despite their differences and bickering — and the opera provides a series of arias and dueling ensemble pieces for the singers. Courtney McPhail and Kayla Miltersen (Thursday’s Goldentrill and Silverpearl, respectively) gave very convincing diva performances and embodied their roles well. Miltersen’s amusing exchanges with Marcus Lonardo as the aptly-named Mr. Bluff were a particular highlight.

The prologue to Ariadne auf Naxos sees a composer faced with the direction to perform his opera simultaneously with the antics of a theatrical troupe. It becomes a farce, juxtaposing the excessively dramatic opera seria with Italian commedia dell’arte. Unlike The Impresario, the role of Majordomo retains spoken dialogue, while all other characters — cast as “serious” musicians or not — sing. This framework allows Strauss’s unique harmonic language to shine and conveys the effect of having stumbled into one of his fever dreams.

On Thursday, Virginia Teed played the composer en travesti (in drag) with a hilariously oversized moustache and mastered the part’s difficult leaps and dramatic demands. She possesses an especially resonant tone that was only somewhat sacrificed in the highest registers. The prologue also features smaller roles that provided many opportunities to shine, notably Kimberly Leamon as Zerbinetta and Malikha Mayes as Prima Donna.

The Impresario and Ariadne auf Naxos were respectable choices given the voices and variation of the conservatory students. With less mature voices, it can be difficult to find challenging repertoire that does not require, for example, the power of a Wagnerian soprano. This program allowed the students to succeed in manageable roles that combined the talents of opera and musical theatre.

The orchestra, especially the violins, unfortunately struggled with vertical alignment. Strauss’s affinity for nontraditional melodies posed a challenge, but overall the ensemble did a commendable job despite some minor blips, and the performances made for a very entertaining evening. The lighthearted tone of the works as well as the brilliant comedic timing of Marcus Lonardo filled the hall with consistent laughs, and the arias were beautifully framed within them. It was an enjoyable performance and reminded the audience that not everything in our world of classical music and esteemed composers must always be so serious.

A Threepenny Gamble at the Conservatory of Music

A+ for the S.F. Conservatory of Music’s Spring Opera Program

First-rate performances and production values made for an afternoon of quality opera with no apologies.