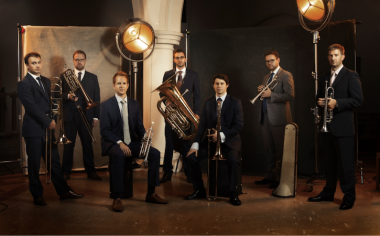 Septura, a London-based brass ensemble, has a primary goal: to reshape the perception of brass chamber music as a serious artistic medium. Their concert for the Morrison Chamber Music Center at SF State on Sunday, Feb. 23, also aimed to foreground the music of Maddalena Casulana and Clara Schumann by placing them alongside their better-known contemporaries, Giovanni Gabrieli and Robert Schumann. Both objectives are admirable, disregarding their slightly overstated attempt to connect them by suggesting that “the fate of brass chamber music mirrors that of the female composers of the past.”

The first half of the program lay firmly in the music of the 16th century. Gabrieli is one of the most-famous early composers of brass chamber music, and Septura’s performance of his Exultavit cor meum (My heart rejoiceth) was familiar, if a bit bland. Maddalena Casulana was nearly his exact contemporary, and became the first woman to have her musical work published with Il primo libro di madrigali (The first book of madrigals) in 1568. The selection of madrigals was varied and interesting, and the three trombones and tuba moved as a particularly sonorous unit.

The second half moved to the Romantic 19th century, a period Septura is more accustomed to as both symphonic musicians and brass players. Their performance of Robert Schumann’s Märsch (March) was lively and beautiful, and the group seemed more in their element. This was followed by their arrangement of Clara Schumann’s Piano Sonata in G Minor, a substantial undertaking and the highlight of the program. Arpeggios flew between instruments, and the three trumpets traded the melody fluently. Their adaptation added interesting elements to the original, such as using mutes and different instruments to change the color of a section. They concluded with a transcription of Felix Mendelssohn’s Organ Sonata in C Minor, surmising that a Mendelssohn concerto for trumpet or tuba may have sounded similar.

The group comprises undeniably excellent players; their members hold principal positions in orchestras across England and Europe, and the ensemble is currently in residence at the prestigious Royal Academy of Music. Their arrangements and transcriptions suit their selections well, and add a solid body of work to the brass septet canon. Their programming selections were less inspired, however. As a brass player myself, I know all too well the struggles of a small body of repertory, or wishing that my favorite historical composers had written for my instrument. However, one cannot help but wonder if creating arrangements of long-since-past composers’ work is helping at all.

Why not work with living composers to commission original works for the unusual combination of brass septet? Or turn to such prolific and esteemed living women composers for a partnership? Anna Thorvaldsdottir, Caroline Shaw, Jennifer Higdon, and Julia Wolfe come to mind. If Septura truly wants to reframe brass chamber music as serious art, at the foreground of what people should be paying attention to and listening to, then bemoaning that the great Romantic and Classical composers of yesterday forgot them is not helpful. As excellent players, interpreters, and all-around musicians, they ought to actively work to make brass music relevant to modern audiences.

Tim Higgins and the SF Symphony Brass Do It Their Way

The SFS principal trombonist talks getting great tone, mixing a perfect cocktail, and the Holiday Brass show at Davies on Dec. 15.

Stafford Agee: Horning In With the Rebirth Brass Band

Traditional jazz still flourishes in New Orleans and elsewhere, kept alive by groups such as the Rebirth Brass Band.

A Centenary Choral Tribute to the Suffragists