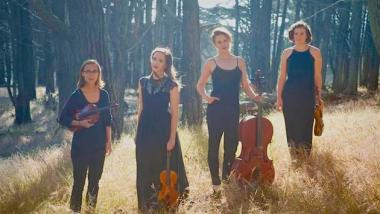 Mostly students attended the concert of Ashley Fure at Mills College, where she is briefly in residence. I hope they were inspired to compose that night; I can’t remember the last time a program was so thought-provoking.

In the notes to the three pieces on Saturday’s program, Fure (who has earned many honors, including both a Rome Prize and Guggenheim Fellowship in 2017) writes compellingly of aesthetic issues. It’s not a prerequisite to think of these references while listening, however; the unique sounds readily evoke different interpretations.

Deep thrumming is the beginning of Anima, Fure’s 2017 string quartet (performed by the Amaranth Quartet: violinists Abigail Shiman and Emily Botel, violist Julie Michael, and cellist Helen Newby). Rubbing stethoscopes across the bodies of their instruments, which are augmented through amplification, the performers create a rattling like dry grass in a strong wind. Later, they press electronic transducers to the strings, drawing out haunting metallic tones.

In publicly examining their tools, the players, touchingly, seem to reach for diagnoses — are the instruments sick? — or interpretations, not just of the piece, but answers to the fundamental questions What am I doing? and What is this? I sometimes lose Fure’s thread (after a thrilling climax, an electronic interlude feels like too much of one) but the piece is fascinating if only as a sumptuous offering of sounds.

In fact, an entire work could be built from any one episode, but for me, the highlight is the sudden foregrounding of the unfolding arm, which jolts, like a marionette’s limb, so that the bow catapults over the fingerboard. It’s delightfully uncomfortable in its performativity: audience members are dazzled by pyrotechnics more often than they are forced to confront the ultimate banality (“Move finger .5 centimeters forward”) of how music is physically produced. It’s like walking past a Suprematist painting and hearing someone, maybe even your own inner voice, say, “My 5-year-old could do that!” (He did not.)

“Are they golems: lumps of clay until incanted into life, or Frankensteins: destined to resist the ones who made them?” Writing about instruments, Fure uses words like volatile, threaten, and overtake — but, hearing the work, I think of abundance, possibility, creation.

Duality rules again in Wire & Wool, Fure’s 2009 work for solo cello (Crystal Pascucci) and live electronics. Here, the cello is at once an aesthetic object, beautiful because it is made, and base, because it is, merely wood and glue. Sounds that evade traditional analysis — semiharmonics and multiphonics — are created by being gentle with the instrument, and thus preserving it, whereas conventional notions of good tone require destructive pulling and pressing. There’s much to think about, but I’ll have to hear it again; Wire & Wool is too brief to go very deep on the first listen.

On the other hand, Shiver Lung 2 is a fully fleshed-out celebration of the physical. It continues to be comforting, when faced with increasingly difficult scores, to see the human’s place in contemporary music so reaffirmed.

In this 2017 work, extracted from The Force of Things: An Opera for Objects, subwoofers project frequencies too low for humans to hear. Percussionist William Winant (masterful, as always) stood over these speakers, and, by touching them with objects — first, mallets draped in Mardi Gras beads — made the low sounds audible. It’s a reverse Emperor’s New Clothes in which Winant, the privileged medium, reveals the unheard as valuable.

At first, the shaking is subtle, in tiny twitches that result from trying to hold hands perfectly still. Then, he begins shaking in earnest, scratching in a cozy groove against the cones. Shaking can be particularly fraught in performance — it’s so wild and uncontrolled — and, like the other works on the program, Shiver Lung 2 exploits the performative moment. It’s a joyous exploration of different materials, but Winant’s hands costar.

Wealth of Duos at Mills

SFEMF Channels Currents of Electronica From the Beautiful to the Baffling

Aficionados celebrate an eclectic range of new (and even old) electronic music at the 18th annual festival.

The expansive festival embraces everything from cassette culture to the hip-hop/noise frontiers of Daveed Diggs’ clipping.