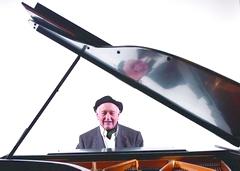 Kathryn Miller on April 3, 2007
Pocket Opera's concert-version of Handel's Flavio, presented on Saturday at the Florence Gould Theater in the Legion of Honor, combined humor, drama, and musicianship, all signatures of Donald Pippin's company. The occasional uneven moments didn't significantly hamper the enjoyable performance. In 1968, Donald Pippin set out to create "singable, intelligible, and literate" English translations of operas. Over the years, he has achieved that goal with tight, concise, and often wildly funny translations. So I was apprehensive when I read that Flavio would be sung in Italian. Would we miss out on the jokes, wordplay, and puns? Fortunately, we did not, as Pippin chose to replace all recitative and sung plot development with short, hysterically funny narration. He would periodically pop out from behind his faux-harpsichord to regale us with clever interpretations of the events, leaving only a string of arias and the occasional duet of Hande's score. This stop-and-start method allowed the audience to stay abreast of the events and relationships, but allowed the singers fewer opportunities to project their characters. Aptly, nearly everything about this performance was pocket-size. The orchestra (the Pocket Philharmonic) sat onstage, behind the line of singers. While the Lilliputian ensemble (eight players, including Pippin) could see and communicate with each other, the singers could not see them, and most struggled with this at one time or another. The first act saw several instances of uneven tempos and tentative cadences. As the afternoon progressed, though, the cast seemed to take charge and allow the instrumental parts to fall into place around them. The instrumentalists gave a finely honed and nuanced performance, each player making the most of his or her part. Flavio has a cast of just six singers, quite concise compared to many of Handel's other works, and all of them are central to the plot. This version had been pared down even further to include only the most necessary events. Fear not, there are still secret lovers, sons avenging their fathers at the risk of losing their beloveds, and kings sending minions to woo for them.

Only the voices on display went against the compact nature of this production. Flavio, the king of Lombardy (and, mysteriously, of England), was intensely sung by mezzo Geeta Novotny. Flavio's tortured advisor Victor (Vitige in the original) was presented by soprano Eileen Morris. Intriguingly, the coquettish Thea (Teodata), Victor's secret lover, is assigned not to a soubrette, but rather to a richer, lower voice. Mezzo Kindra Sharich clearly relished this opportunity to play a flirty, girly character. Thea's father, Hugo (Ugone), a candidate for the post of governor of England, was sung by the underused Brian Thorsett, while his conflicted son, Guido, was nicely acted by Elspeth Franks. Erina Newkirk sang Guido's fiancée, Emilia, and Boyd Jarrell played her father, Lothario, Hugo's rival for the governorship. As the monarch, Novotny displayed a commanding, dark sound. She maintained constant contact with the audience, only rarely consulting her score, and showed a commitment to her character. Her presence was undeniably confident and regal. The only thing detracting from Novotny's performance was her tendency toward Americanized diction, with many final vowels ending in diphthongs. Morris sang with clear, bright timbre and good diction. She also showed a nice dynamic range, but rarely made contact with the audience and could have given a more dramatic performance. Her depiction of Victor lacked the necessary male energy, which, combined with her (quite beautiful) concert gown, made it difficult to remember who was whom in the love duets. As Thea, Sharich sang warmly and with great expression. Her voice remained grounded despite the flightiness of the character, which she emphasized nicely. Sharich's sheer enjoyment of the performance was obvious. Franks was classy and committed. Her rich sound and wide-ranging dynamics lent Guido a serious yet sincere nature. Her ornaments were imaginative and her comfort with the style was evident. Surprisingly, Franks had trouble negotiating her Act 2 aria, but it nonetheless contained some lovely moments, especially in the hushed conflicted second section. Brian Thorsett rounded out the family. In his all-too-brief aria, he delivered well-articulated coloratura and clear characterization. Jarrell was uneven as Lothario, Hugo's political rival. In a politician's dark blue suit and starched white shirt, he gestured convincingly with a pair of reading glasses and embodied the character. Vocally, however, Jarrell seemed uncomfortable. His diction was clear, but while his rigidly marcato singing could have been a dramatic choice (emphasizing the frustration and outrage of a discounted, disgraced man) he was unable to sustain a consistently legato line.

Newkirk emoted tenderly as his loyal young daughter. She got off to a rocky start, however. The tempos in her first act arias swayed quite a bit, and she seemed tentative. She was more comfortable by the close of Act 2, in which Emilia must decide whether to punish Guido for her father's death. Here, Newkirk was not only musically sure but also touching. As we all hope and expect in an opera seria, everything works out in the end. Although Guido has killed Lothario (because he dishonored Hugo), Emilia realizes that she loves him too much to exact revenge. Flavio eventually finds out that, despite his words to the contrary, Victor does fancy Thea, who has gamely gone along with the charade of being wooed by the king. The young lovers, of course, reunite. Humorously, Pippin asserted that everyone is so contented that "even the ghost of Hugo's slain rival is drawn into the final chorus." For without Lothario, there would have been no baritone. Despite the unsteady moments, Flavio was highly entertaining and interesting. It can be heard again on April 15 at Notre Dame de Namur University in Belmont.